The Daily Nexus
News
Student Activist Network Reflects on Year Since 2016 Election
November 9, 2017 at 12:18 am by Maura Fox

When a midnight protest erupted on the UC Santa Barbara campus one year ago, the Student Activist Network provided megaphones for protesters to voice their dissatisfaction regarding the newly-elected president. 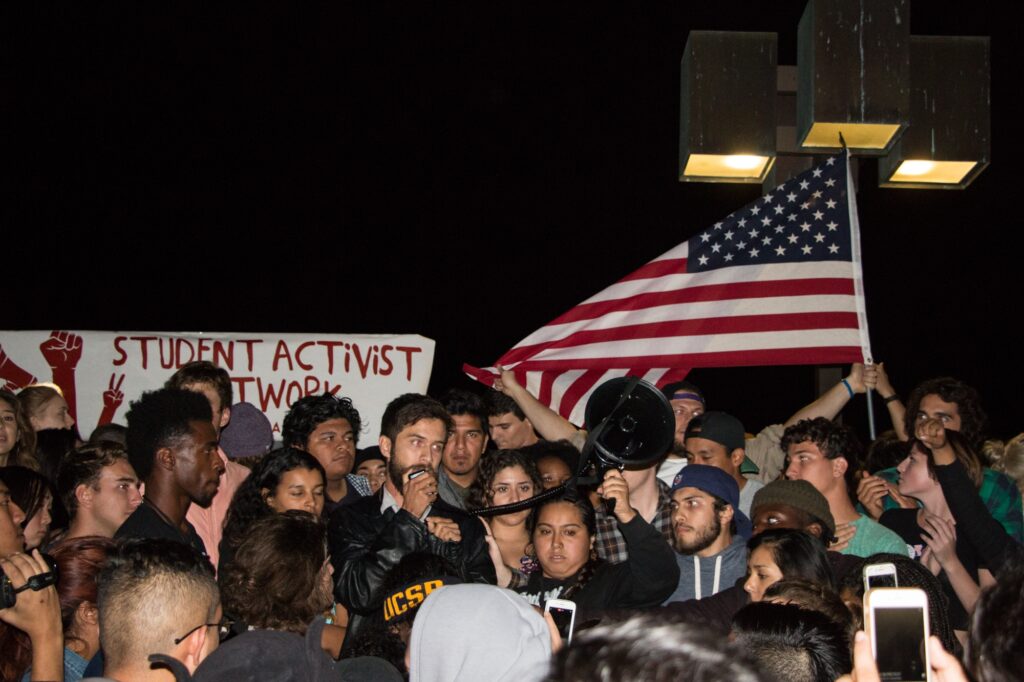 Eric Villalobos, fifth-year religious studies major, created the Student Activist Network (S.A.N.) at the beginning of Fall Quarter 2016. At the time, he was prepared to organize social justice movements under a Clinton presidency.

When Donald Trump won the election, Villalobos had to change his plans.

“I threw myself more into S.A.N. It’s like a full time job for me,” Villalobos said.

The Student Activist Network is a student-run social justice organization that organizes demonstrations and protests for racial justice, gender equality, immigration, workers’ rights and other issues

Since Election Day 2016, the network has organized and participated in several on-campus and local demonstrations, including protests after election day, a May Day rally for laborer rights, a rally against rape culture and a sit-in at Cheadle Hall with Fossil Free UCSB.

Mayela Morales, a fourth-year Chican@ studies and global studies double major, is the head organizer of S.A.N. She became involved in student activism when she started taking Chican@ studies courses at UCSB.

The biggest change Morales has witnessed in the U.S. since Trump became president is an increase in outward racism throughout the nation.

She said Trump’s policies, like the administration’s travel ban in March and the repeal of the Deferred Action for Childhood Arrivals program in September, have spurred racist rhetoric and sentiments.

“It always comes back to targeting a community in particular,” she said. “Racism has become more blunt — it’s just straight up in your face.”

The group has an organized a caucus for each of the seven issues: racial justice, feminism, LGBTQ+ rights, immigration, the environment, workers’ rights and student movements.

Morales said many of the caucuses have organized projects in direct relation to the Trump administration’s policies, including Secretary of Education Betsy DeVos’s repeal of Obama-era Title IX policies.

The feminist caucus, for example, is collaborating with Ro Earvin, a UCSB student who presented a list of demands to Chancellor Henry T. Yang in May to reform how the university handles sexual violence.

On Monday, the Student Activist Network printed 500 copies of its “Disorientation Guide,” a booklet that contains historical information about student movements and activism at UCSB, as well as information on labor unions and housing cooperatives.

“When you come to the university, you get an orientation packet,” Villalobos said. “This is the same thing except it’s from a radical perspective. This shows students [UCSB] is not just a place where you go to class, get your degree and leave.”

Villalobos said the “Disorientation Guide” will helps students understand the impact students have made on UCSB’s history and know how to better organize against oppression today.

“When I started S.A.N., it was a piece of beat-up notebook paper,” Villalobos said, reflecting on how much the organization and its structure have changed in the past year.

Today, the group has a head organizer, an internal organizer, treasurer, a meeting facilitator and a central organizing committee.

The network also holds core organizing meetings, during which the board discusses long term plans, and general body meetings, in which all caucuses meet together to work on their projects.

The Student Activist Network is open to anyone interested in joining, Villalobos said, which is an aspect of the organization he believes makes it unique on campus.

“We’re a radical student group, but we accept everyone,” he said, adding that without limits based on political affiliation or identity, the network is able to address a variety of social issues that affect different groups.

Villalobos also said the Student Activist Network wants to educate more incoming students about the history of movement-based activism and getting involved.

“The university is a site of struggle, and historically there’s been a lot of action,” he said.

Villalobos, who will graduate at the end of Fall Quarter, said he wants to keep students engaged with movement-based politics even after the Trump presidency.

“There’s the resistance to all these things that have existed before [Trump] and will exist afterwards,” he added. “They have to be resisted either way.”

As the Student Activist Network looks toward the future, Villalobos said it is important for students to remain resilient and dedicated to social justice even after Trump leaves office.

A version of this article appeared on p.3 of the Nov. 9 print edition of the Daily Nexus.