The Daily Nexus
Opinion
Editorial: News in a Year After the 45th President
November 9, 2017 at 12:30 am by Daily Nexus Editorial Board 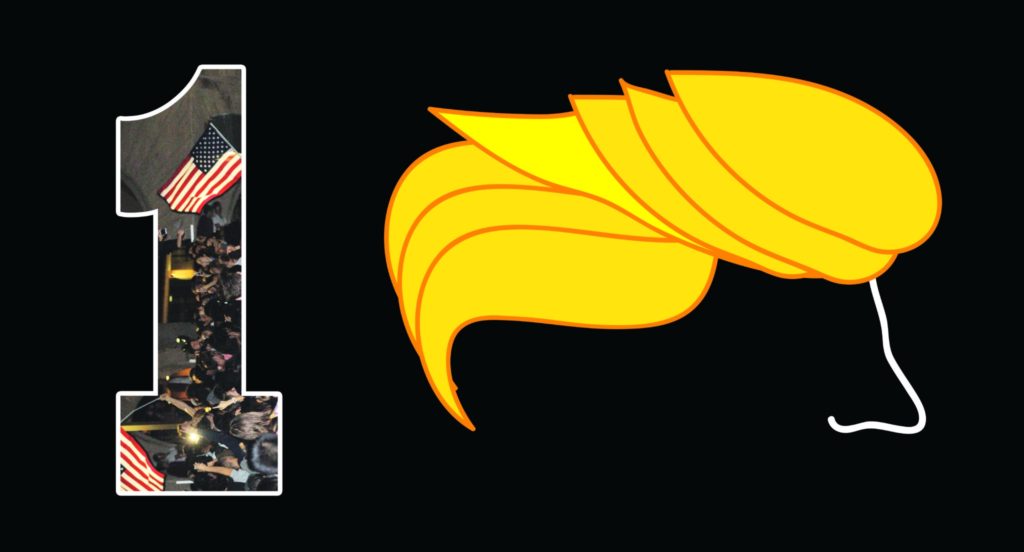 Editors, writers and photographers were crammed into the Nexus office on Nov. 8, 2016, snacking, reporting and awaiting results from our generation’s first shot at voting for a U.S. president.

The talkative crowd simmered down as the night went on, and most people left the office in the early hours of the morning, tackling a mental array of confusion, anger, optimism and curiosity.

One year after the election, these emotions have only become more salient, and journalists find themselves struggling to remain objective in a chaotic atmosphere governed by unfamiliar norms.

For many students at UCSB, the election didn’t seep into daily life. For others, the election was their call to throw themselves into political discourse, whether it was in stark defense of the president or in daily, deep-rooted resistance.

A newspaper’s primary obligation is to remain objective no matter how chaotic the world may be. But how do you stay loyal to the truth in a time when the line between fact and absurdist fiction is indistinguishable? How do you present objective facts when the information you are processing has a tangible impact on your own life and well-being?

Over the past year, the Daily Nexus has grappled with these questions time and time again. We hope to provide neutral coverage while dealing with our own opinions and biases, many of which are emotional and visceral in nature.

We are living in a unique moment where the state of news itself is newsworthy. We can’t lie — the national bubblings and accusations of “fake news” rattle us each time we observe them. More critically, these moments are a crucial time for journalists to reflect on the quality of their work.

Journalists have a responsibility to hold an open dialogue with readers about the process by which they construct and deliver “the truth” to their audience. It’s time to get meta.

The freedom that comes with being an entirely student-run newspaper can tempt us to incorporate our own (mostly liberal) biases into the news.

To complicate things further, we are members of the student body whose stories we are telling. While most journalists are keen observers analyzing a scene from the outside, we live and breathe the stories we tell; our newspaper is autobiographical by default.

The Nexus editorial board believes its coverage has been fair and objective in the past year, but our paper has miles to go in seeking out important local stories that don’t fall easily into our laps.

In the digital realm, many of our online comments come from conservative readers who feel rebuffed and neglected in mainstream discourse. We need to provide a resource for students with diverse political beliefs, and it’s simple to fall into a self-assuring bubble of content.

Our ultimate goal is to match the vivacity and passion of our community, and this project begins by keeping an unceasing eye on our local politics, activism, art and spirit — regardless of the national disarray that so deeply affects our environment.

Any organization of like-minded people is vulnerable to becoming an echo chamber, and the Nexus is not an exception. It is a daily challenge to understand stories from spaces we don’t frequently inhabit, but the people who sustain UCSB have ceaselessly shared their knowledge.

We’ve gained an incalculable wealth of knowledge from the emails, comments, text messages and daily critiques of our content, and we’re extremely grateful for our community’s participation in the news.

As this year comes to a close, the Nexus will embrace another cycle of staff changes, trainings and graduations. In the midst of our personal chaos, we will look to the resilience of UCSB and Isla Vista to self-correct and improve as a news organization.

A version of this article appeared on p.1 of the Nov. 9 print edition of the Daily Nexus.

“But how do you stay loyal to the truth in a time when the line between fact and absurdist fiction is indistinguishable?” You mean like the wage gap myth, the Rolling Stone rape hoax, “hands up, don’t shoot,” Mitt Romney paying $0 in federal taxes for ten years, and so many more Fake News stories? I will freely admit that Trump plays fast and loose with the truth at times, but he didn’t start the game. He just beat the left at a game they started, and it is a game rooted in the academic postmodernists’ denial of objective truth… Read more »

“But how do you stay loyal to the truth in a time when the line between fact and absurdist fiction is indistinguishable?”

Or is the boundary between truth and falsehood so intimidating and deep that we must of necessity assume you are as likely offering falsehood as truth?