Human activities have placed populations of many endangered species at risk, and mitigation efforts typically focus on reducing environmental sources of mortality. However, failing to recognize the additional role of environmental factors in regulating birth and mortality rates can lead to erroneous demographic analyses and conclusions.

The North Atlantic right whale population is currently the focus of conservation efforts aimed at reducing mortality rates associated with ship strikes and entanglement in fishing gear. Consistent monitoring of the population since 1980 has revealed evidence that climate-associated changes in prey availability have played an important role in the population’s recovery. The considerable interdecadal differences observed in population growth coincide with remote Arctic and North Atlantic oceanographic processes that link to the Gulf of Maine ecosystem. 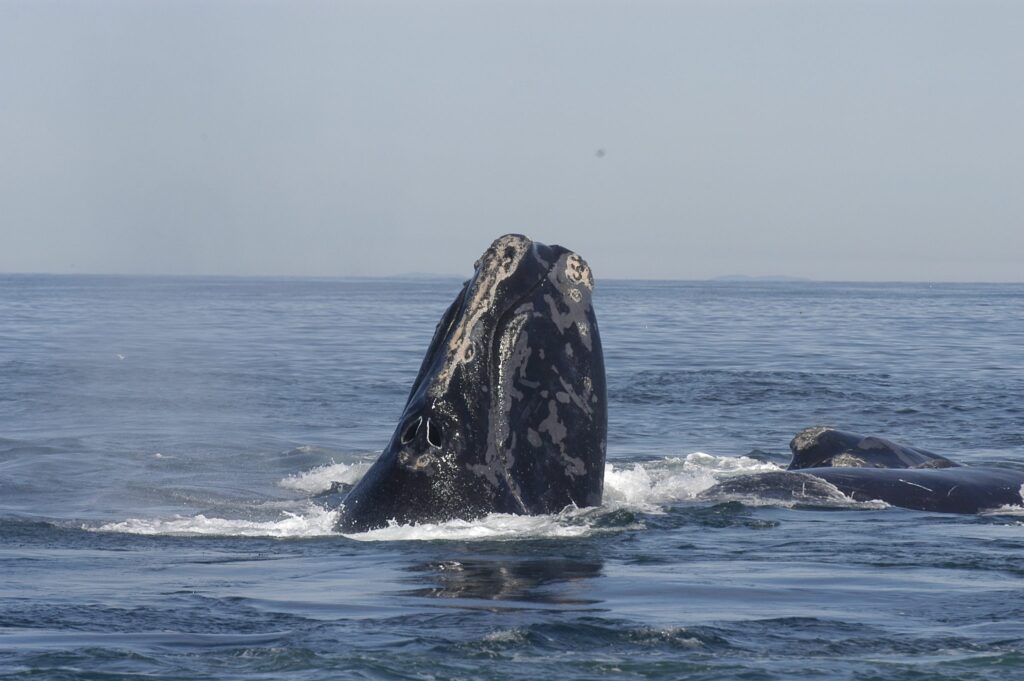 The North Atlantic right whale, Eubalaena glacialis, population has approximately 524 individuals and ranges from calving grounds in the southeastern U.S., along the coasts of Florida and Georgia, to feeding grounds in the northeastern U.S. and Canada, primarily in and around the Gulf of Maine. / Courtesy of Wiki Commons

They built capture-recapture models to quantify the role of prey availability on right whale demographic transitional probabilities and used a corresponding demographic model to project population growth rates into the next century.

Meyer-Gutbrod found that the effects of prey limitation are most pronounced in reproductive females, which require increased caloric input to support pregnancy and lactation. Reproductive females also face decreased access to prey during migration and time spent on the calving ground.

Birth rates correlate with changes in adult female health and body condition, and the interval between births has been observed to lengthen during periods when prey availability is low. Years with few calf births directly correspond with years of decline or stagnation in population growth, indicating the pronounced effect of reproductive variability on species viability.

“During periods of low food, birth rates plummet and the right whale population is even less resilient to ship strikes and fishing gear entanglement,” Meyer-Gutbrod said. “As gulf waters warm and right whale prey shifts north in search of a colder climate, these animals may not be able to reproduce fast enough to replace all of the animals that are killed. This is particularly tragic given their already low numbers.”

Contrary to previous predictions, the right whale population is projected to recover in the future as long as prey availability and mortality rates remain within the ranges observed during 1980–2012.

While it is impossible to accurately predict future growth, especially in a population as small and volatile as that of the North Atlantic right whale, demographic projections can be used as a tool to explore the interactions of various drivers of growth and decline.

Right whale vital rates are heavily influenced by both environmental conditions, such as prey availability, as well as human activities, such as shipping and fishing. This analysis demonstrates multiple scenarios of population trajectories under both low and high prey availability and with consistent or increasing anthropogenic mortality rates.

While the incorporation of prey availability as an explanatory driver of calving rate variability assists in building a mechanistic understanding of demographic changes, future efforts to build a temporal index of anthropogenic risk to drive mortality rate variability would be a valuable extension to this work.