The Daily Nexus
Sports
Joe Pasternack and the Gauchos Storm Into the T-Dome for Exhibition Game
November 2, 2017 at 5:10 am by Jorge Mercado 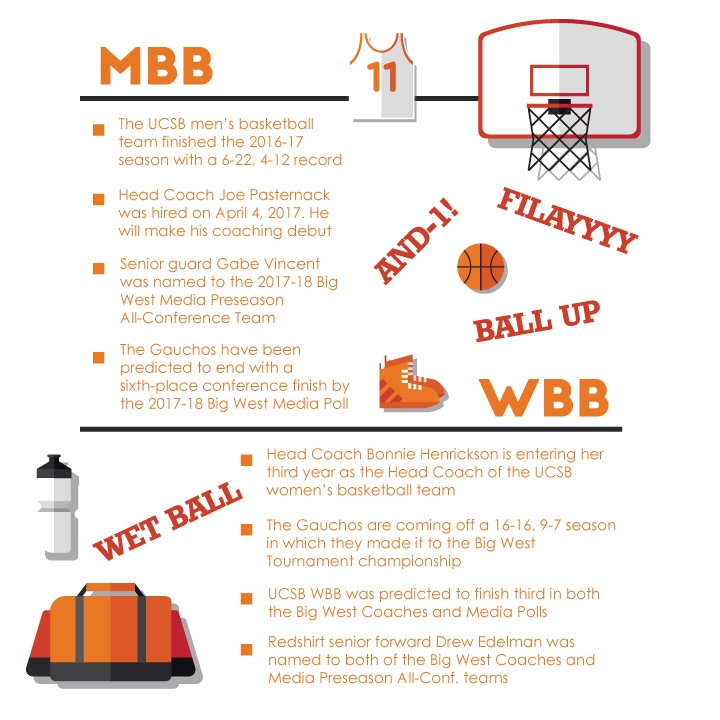 A new era begins for the UCSB men’s basketball team at this Saturday’s exhibition match versus Fresno Pacific as new Head Coach Joe Pasternack will make his debut on the sidelines for the blue and gold.

This will be the second year in a row that the Gauchos will be taking on the Sunbirds in their home-opener preseason matchup. Last season, Santa Barbara knocked off Fresno Pacific easily, 82-62.

Of course, last year would be something UCSB would like to forget for the most part, as they suffered through a 6-22 overall, 4-12 Big West record on top of missing the Big West Conference Tournament for the first time since 1998.

Despite not being a game that counts in the win-loss column, Saturday’s match still has quite a buzz, with the addition of not only a new coach but also some new faces out on the court.

Along with Pasternack, the Gauchos will be welcoming graduate transfers Leland King II and Marcus Jackson. Jackson was a three-year starter at Rice, while King II played in 20 games for Nevada last season after transferring from Brown University.

Last season, Jackson was the third leading scorer on the team with 12.2 points per game, while his 2.3 assists ranked second best on the team. The Acton, Calif., native had season-ending knee surgery during what would have been his junior season in 2015-16, one year after averaging a career-high 14.5 points per game and leading the conference in three-point makes with 85 of them.

King II averaged 3.7 points and 2.6 rebounds per game with the Wolf Pack and 12.1 ppg and 6.5 boards per match in two seasons at Brown. King II graduated from Nevada last year with a degree in business.

Both players are expected to start and contribute right away to a Gaucho team that struggled in all facets of the game last season. Joining them will be a plethora of returners, including seniors Gabe Vincent, Alex Hart and Jalen Canty.

Beginning with the former, Vincent is coming off an ACL tear that ended his season back in February. Before that, the shooting guard was one of the few bright spots UCSB could count on as, before missing the final eight games of the season, he was averaging 14.8 points per game along with 3.7 rebounds and 2.4 assists per match.

Despite the injury, the Stockton, Calif. native is still a well-respected figure in the Big West basketball community, as he was the only Gaucho named to the Big West All-Preseason Team.

Due to his barely getting back into game action for the first time in a while, expect Vincent to have his minutes limited Saturday, as well as maybe the first few games of the season, before making a return to the starting lineup.

For Canty, this is his second year as a Gaucho after transferring from community college. Like Vincent, Canty was getting better with each game throughout the season, at one point leading the Big West in rebounds, but was sidelined for all of conference play due to academic ineligibility.

In 10 games last year, the big power forward averaged 10.2 points per game along with 7.0 boards. This summer, Canty has worked incredibly hard in both the classroom and the weight room, as he is eligible to play, and he has slimmed down considerably in hopes that it can help diversify his game.

The last senior on the team, Hart, was one of the main threats for the Gauchos when Canty was ruled ineligible to play. Last year, Hart, who plays center, played in all 28 games for UCSB, averaging 7.6 points per contest. He was able to really improve in his final eight games of the year, scoring in double figures four times, including a season-high 16 points twice.

Other notable players to watch out for will be sophomore guard Clifton Powell Jr., who was a sparkplug off the bench for the ‘Chos last season, sophomore guard Max Heidegger, who had an average slash line of 7.6/2.1/1.4, and junior forward J.D. Slajchert, who brings tremendous energy every time he is out on the court.

On the other side of the court, Fresno Pacific will also be looking to improve off of an average season that saw them go 7-20 on the year but 7-13 in conference play.

Recently, the Sunbirds were tapped to finish 11th in the PacWest Conference and had no players named to the preseason all-conference team.

Under second-year Head Coach C.J. Haydock, FPU will look to rely on senior center Oliver Herting, who only averaged 6.5 ppg and 1.6 rebounds but is one of the few remaining members, as the team has added nine newcomers to the squad this season.

Saturday’s match won’t mean much to the Gauchos in terms of the score, as they are expected to bull over their opponent, but what will be important is how they look doing it. With many new pieces in Santa Barbara, it will be interesting to see how Pasternack could make it all work.

The team has been predicted to finish sixth in the conference this season. However, if some of these additions can work, maybe this team’s ceiling is higher.

First impressions are everything, and Pasternack has stated he wants the Thunderdome to be packed this season. Winning is one of the first steps he can take to ensure it is.

UCSB takes on FPU in an exhibition match at 2 p.m. on Saturday, Nov. 4, at the Thunderdome.