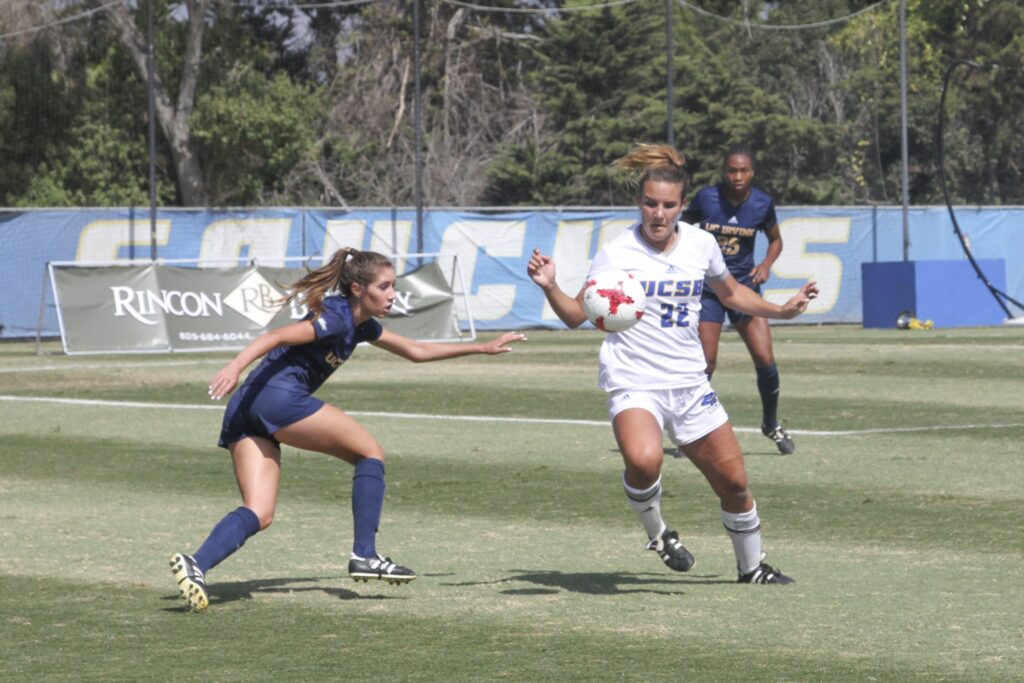 The Gauchos wrapped up the 2017-18 season at home on Sunday with a 1-1 tie against Cal Poly, missing the Big West Tournament for the second year in a row.

CP ended the season on a bit of a high note with a 2-0-2 stretch over its final four, including an impressive 2-0 win over fourth-seeded Cal State Fullerton.

UCSB ended the year tied for seventh place with the Mustangs in the Big West with a 6-8-5 overall, 2-4-2 conference record, yet came into the game with an opportunity to move up to fifth in the standings and also leapfrog over their rivals from San Luis Obispo.

It seemed as if the Gauchos had every intention to make the most of this opportunity, as they came out attacking in the first half.

Both forward Amanda Ball and midfielder Christine Maurer had early chances that were denied, but 19 minutes in senior Kate Shoemaker was able to break through for UCSB. The defender knocked in her first goal of the year off of Colby Parker’s corner kick, and the moment was even more special as it was her last game as a Gaucho.

The rest of the first half played out evenly for both sides, although UCSB did get off many more shots than Cal Poly a number of quality shots for both squads were pretty equal and the goalkeepers for both squads had to make multiple saves to keep their teams alive.

The physical nature of the Blue-Green rivalry also was present in the first half, even if it was the Gauchos who were often the aggressors (they doubled Cal Poly’s foul count in the first half 8-4) both squads had plenty of hard challenges that contributed to the chippy atmosphere.

The Mustangs must have taken the physicality to heart as they came out guns blazing in the second half, and found the mark in the 47th minute of the game.

Again it was a senior scoring in her last game, except this time it was midfielder Emily Hansen who knocked in the game-tying goal after Brittney Rogers couldn’t corral a Cal Poly freekick.

UCSB dominated the half, however, tallying seven shots to Cal Poly’s one the Gauchos were operating at a high level on the offensive end for the last 40 minutes of the game.

They weren’t able to put one shot past Mustang goalkeeper Sophie Brown however as the sophomore had a stellar half, stopping four shots in the half itself and totaling nine on the day.

The saves didn’t seem to affect the Gauchos who continued to attack the Cal Poly goal until the very last minute of regulation.

Going into the first overtime not much changed for the Gauchos while Cal Poly brought three pairs of fresh legs in. It was UCSB who looked like they had a boost of energy however as they put three shots on goals in the first overtime period, and if not for the heroics of Brown they almost certainly would have ended up winning the game.

The keeper made the three saves, however, and neither team took a shot in the second overtime period leading to the 1-1 tie.

While this wasn’t the result the Gauchos hoped for coming into their season finale, the game actually provided a lot of positives going into the offseason.

The play of Christine Maurer continues to be a shining spot as the freshman showed countless times this year that she has potential to be a top player in the league in the coming years.

The great defense that the team played on Sunday also was emblematic of how good UCSB has been defensively to end the year. Although the result wasn’t everything the Gauchos wanted it to be, they played hard and played great soccer, which fittingly is a good analogy for how the 2017-18 season went.