There’s little room for error against good teams and the UCSB women’s volleyball team learned that lesson the hard way Saturday evening in Rob Gym, as they fell to Hawaii in four sets (25-20, 25-22, 19-25, 25-17) thanks to some slow starts and defensive breakdowns.

The loss killed the Gauchos three-game winning streak it carried into the match and dropped them to 6-16 overall, 5-5 in the Big West. Hawaii, however, got back on the winning side of things improving to 16-7 overall and 10-2 in conference play.

Facing the Rainbow Wahine for the second time this season, the Gauchos looked for the first three sets as though they had learned a lesson from that first match, a 3-0 Hawaii victory.

The visitors took both of the first two sets, but neither came easy to the Rainbow Wahine. Both sets saw Hawaiicrack open a small lead around the 10-point mark and widen the advantage later, before withstanding a furious comeback attempt from UCSB that closed the gap to 23-20 in the first set, and 24-22 in the second.

It was only in the third set that the Gauchos managed to take one for themselves. UCSB trailed only once when Hawaii scored the first point and glided home to a comfortable 25-19 win.

Unsurprisingly, that third set was UCSB’s best offensive effort throughout the night.

The Gauchos hit .323 and racked up five service aces, allowing them to take the set despite trailing Hawaii in kills 11-13. Annie Hasselmann and Charlie Robinson had two aces apiece, and the team as a whole never let the Rainbow Wahine make things interesting. 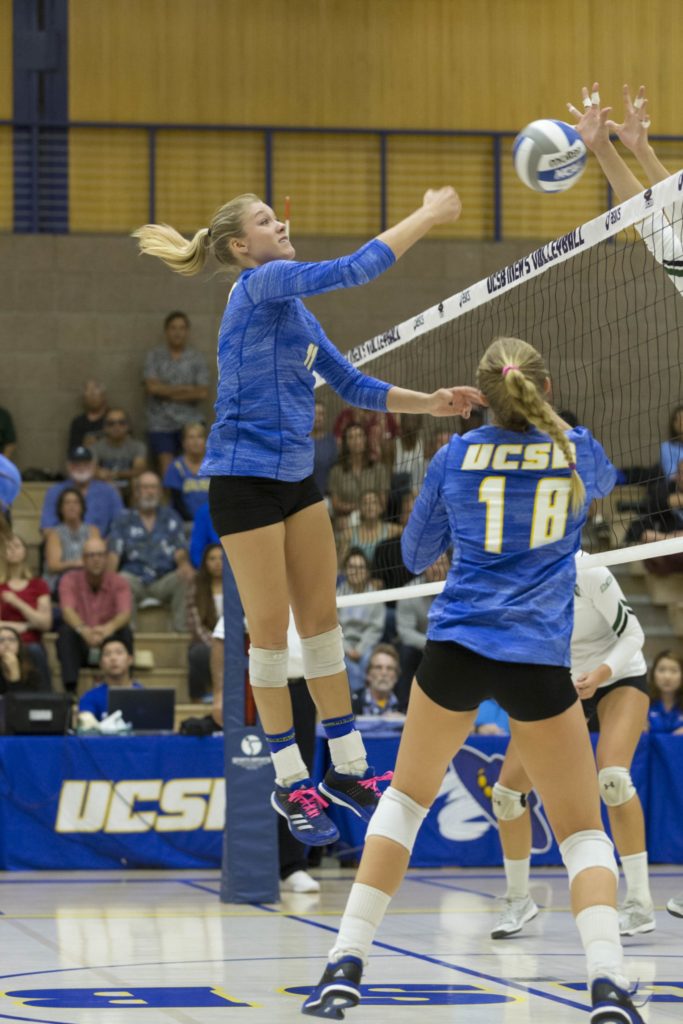 “I thought the second and third sets we played really well,” UCSB head coach Nicole Welch said after the game. “We hit over 20 percent in both those sets and we put ourselves in a position to win. That’s when we started rolling.”

In the next set, however, Hawaii returned the favor. The visitors came flying out of the gates and took the first seven points of the set, pushing the Gauchos onto their heels from the outset.

The onslaught continued mostly unabated for a while, as the Rainbow Wahine ran out to a 16-3 lead thanks to a barrage of kills. UCSB managed to stem the flow of blood at that point, and mus red two separate five-point runs to close the gap a little bit, but the deficit was ultimately too large to overcome.

“Volleyball is a funny game, it comes in waves,” Nicole Welch said. “We were just a little rough early and we had to steady out. You’d think you’d be ready and fired up, but it was just a bit off to start the match.”

Hawaii managed to hit above 20 percent in all four matches, a major contributing factor to their win on Saturday. Sophomore McKenna Granato led the Rainbow Wahine attack with 21 kills, a typical result for the standout outside hitter, and added 17 digs for a solid double-double.

“Probably our biggest disappointment (Saturday) was our defensive effort,” Welch said. “That’s been really strong the last week or so and we really didn’t do a good job. We weren’t following our scouting report like we wanted to.”

The Gaucho defense might not have been clicking the way Welch wished, but the team’s service game was almost impeccable. UCSB had a season-high 14 kills, with Hasselmann’s six leading the way.

“(Hawaii) has a really good middle, so part of our strategy was if we get them out of system, we don’t have to deal with her,” Welch said. “Obviously we wanted to serve aggressively and we were going to be okay with a few errors if we went at them really hard.”

Lindsey Ruddins led all players Saturday with 23 kills, and the redshirt sophomore chipped in 16 blocks as well for a double-double of her own. It was an excellent performance by any measure for the outside hitter, but one that the reigning National and Big West Player of the Week has managed to make almost ho-hum, a testament to her season-long run of dominance.

Outside hitter Chloe Allen, who missed eight matches with an injury in the middle of the season, seemed back to full form Saturday evening. The sophomore posted 16 kills, her second-highest total of the season, and provided the Gauchos with a formidable second weapon.

“Chloe struggled the last week and she really came to life (Saturday),” Welch said. “That’s important for our team, and for our team moving forward, so that was a great plus.”

UCSB next match is versus Cal Poly at 7:00 p.m. on Friday, November 3 in San Luis Obispo.