The Daily Nexus
News
Cute, Not Cuddly: Isla Vista Raccoon Numbers May Be in Decline
October 30, 2017 at 7:18 pm by Hayley Tice and Eric Moon

Three raccoons get up close and personal with an Isla Vista resident. Ariana Marmolejo / Daily Nexus

The furry masked bandits that prowl Isla Vista are known to steal the vulnerable hearts of Isla Vistans, but they leave in their wake something far less lovely: assorted parasites and diseases.

Since Jan. 2016, the Public Health Department says 12 raccoons with canine distemper have been euthanized by County Animal Services.

Despite the risk of these diseases, many Isla Vistans agree that the general raccoon population has dipped in recent years due to trash management and severe drought conditions.

Rodney Gould, the general manager of the Isla Vista Recreation & Park District who has lived in I.V. for over 35 years, attributed the decline in the local raccoon population to the drought, saying he has a seen a slight increase in numbers this year. 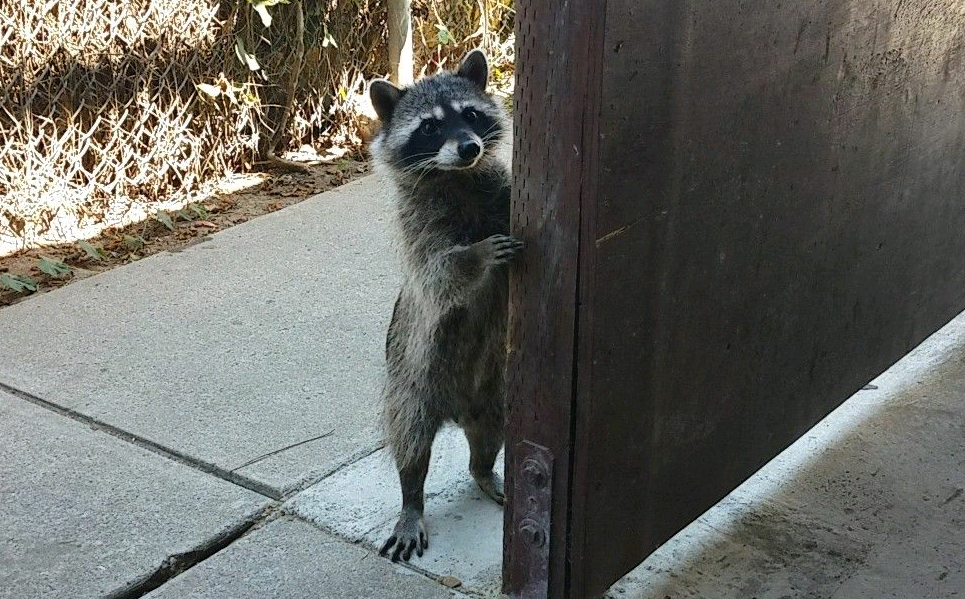 A raccoon stands on its hind legs in front of a beachside residence outside Del Playa Drive. Courtesy of Kiana Hassanzadeh

He was clear that despite the rise, the raccoon population in I.V. has declined significantly from its heyday.

“Back in the day, I used to have families of raccoons passing through my yard on a nightly basis destroying my plants and relieving themselves on my roof,” he said in an email. “Recently I see mostly individual skunks and raccoons if any at all.”

Others were more inclined to believe the decrease is due to more effective trash management.

Matthew O’Carroll, a manager at the UCSB Facilities Management, said raccoons have dropped in number because of campus moves to reduce food sources, close trash can lids and install dumpster locks.

O’Carroll also explained that students may not always see the full impact of raccoons. He recalled seeing raccoons pulling trash out of bins at 5 a.m.

“The majority of our campus community doesn’t see this because our groundskeepers pick that up before everyone arrives here on campus,” he said. 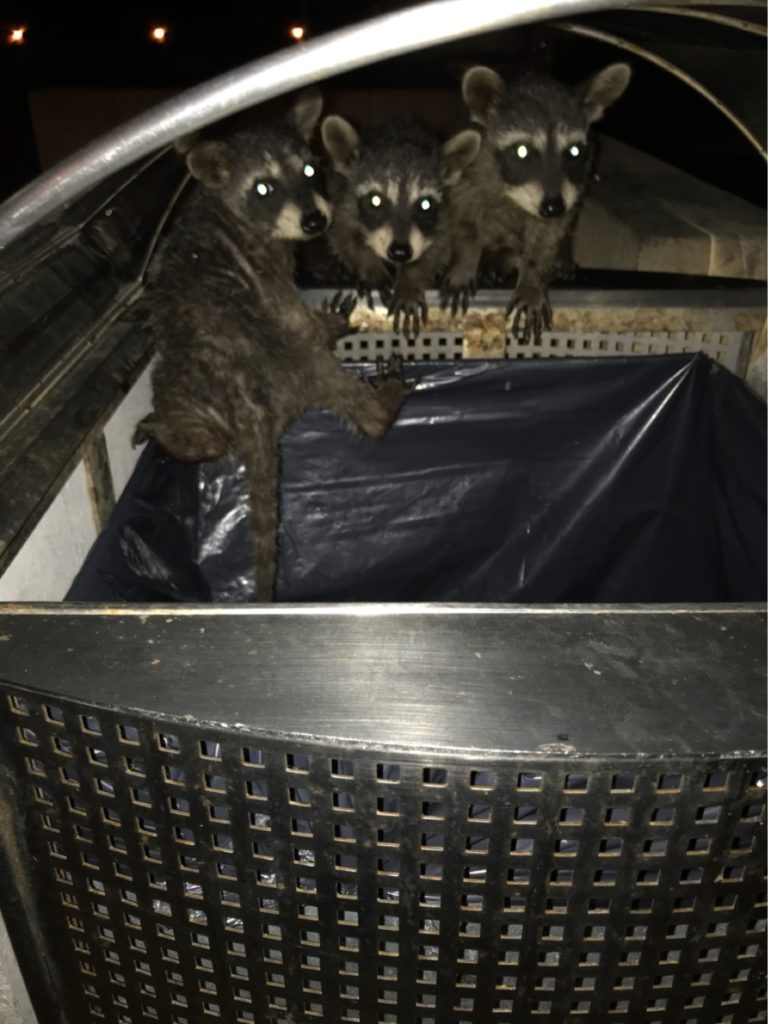 O’Carroll said raccoons are more likely to be found in the “peripheral” parts of campus, including areas bordering the slew, Isla Vista, the lagoon and the airport.

Sara Weinstein, a researcher at the University of Utah, formerly studied the infection rates of a raccoon parasite for her Ph.D. dissertation at UC Santa Barbara.

Weinstein mentioned an interesting place that students may find raccoons: the beach.

Raccoons have never attacked anyone at UCSB, O’Carroll said, but added, “It’s always a possibility.” 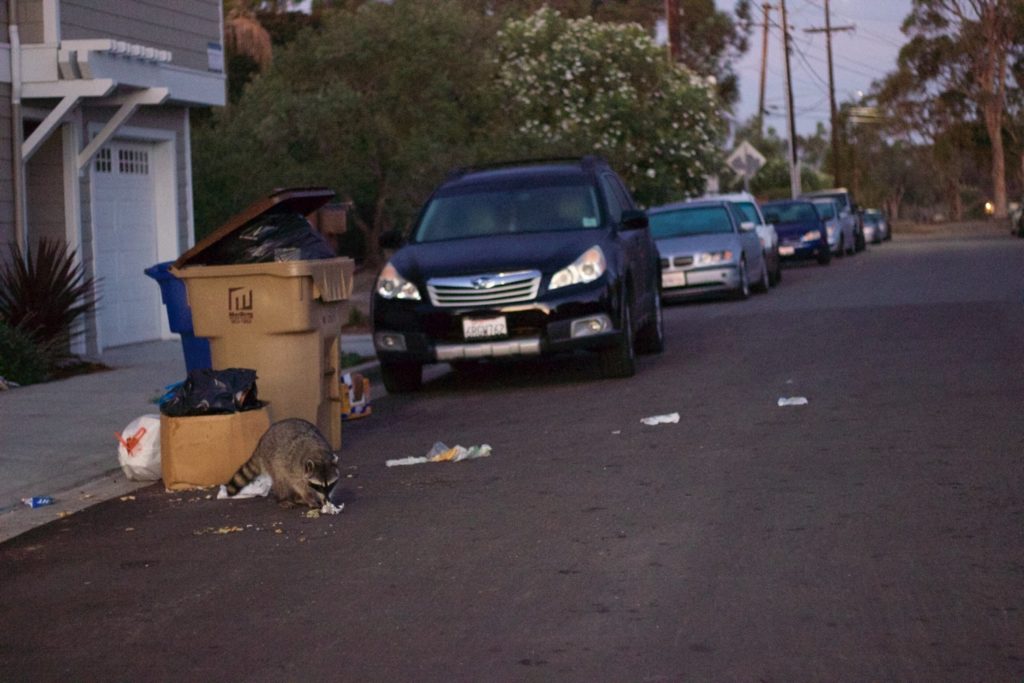 He noted that raccoons can be really aggressive and said he has heard of situations where raccoons stand on their hind legs to appear bigger, challenging people who are afraid to appease them with food.

Weinstein and O’Carroll both recommended that people leave raccoons alone and avoid feeding them.

Weinstein also advised that people not leave food and water outside for their pets because raccoons may use them, and this creates a risk of these diseases spreading to the pets. 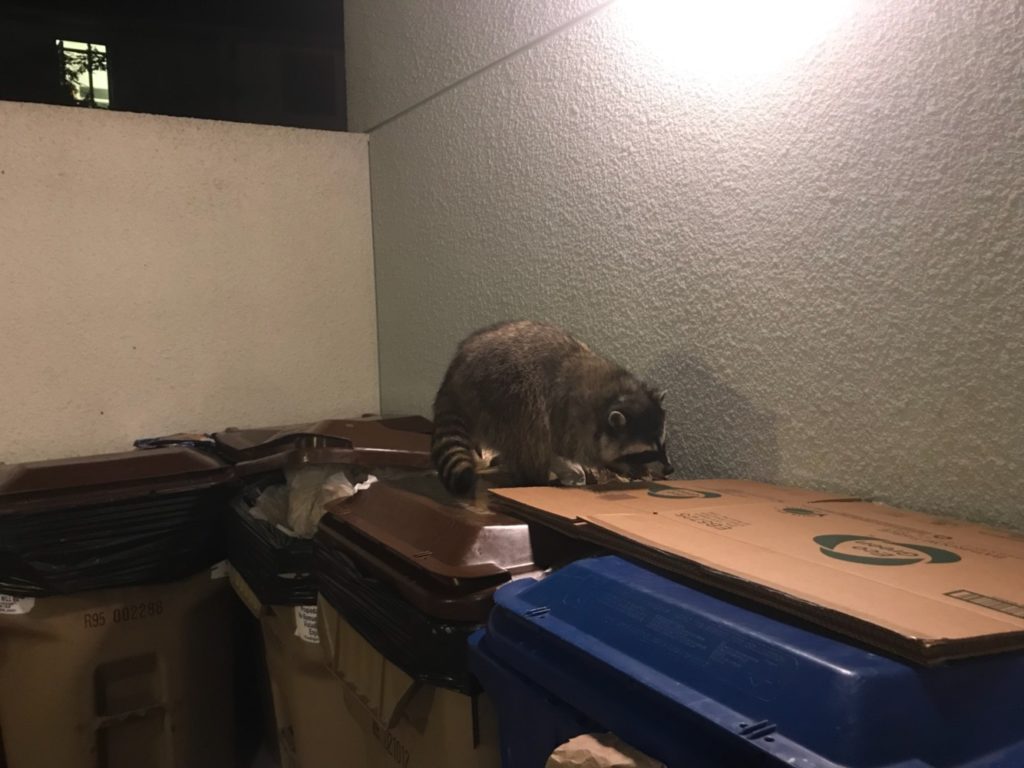 A scraggly-looking raccoon scratches at a piece of cardboard to discover a wealth of trash beneath. Haley Tice / Daily Nexus

“You don’t want to teach the raccoon that you or your yard is a good place to come and get food,” she added.

While rabies also happens to infect raccoons, rabies is not as common in raccoons in California as it is on the East Coast, according to Weinstein.  She nevertheless advised against petting raccoons.

UCSB students may be interested to hear that the infamous albino raccoons may still be roaming around the Isla Vista area. Weinstein explained that one was caught on camera in Coal Point about a year ago.

“The albino genes are still out there,” she said.

A version of this story appeared on p. 1 of the Thursday, Oct. 26, edition of the Daily Nexus.