The Daily Nexus
Sports
UCSB Anticipates Its Home Finale, Will Host UC Davis
October 19, 2017 at 5:10 am by Andrew Hernandez

Harder Stadium welcomes the Gauchos for the last Saturday night home game of the regular season, during which they will play the UC Davis Aggies just three games away from the start of the postseason.

Santa Barbara comes into this matchup fresh off a 2-1 Golden Goal victory at Sac State Wednesday and now boasts a 6-5-4 overall record. Their 4-1-2 mark has the Gauchos back to holding the top spot in the North Division conference with 14 points.

UC Davis rolls into this second meeting with the Gauchos a bit disappointed, as a 3-2 loss to Cal Poly on Wednesday dropped them to second place in the Big West North standings with 13 points. The Aggies currently boast a 4-1-1 record in conference and 7-6-2 overall.

The match marks the second time in a bit over a week that the two clubs face off. In the first game, played at Aggie Stadium, Davis was able to hang three goals on the Gauchos, earning itself the win 3-0.

Shaky defensive play and an inability to get a clean look at the net for a shot were the two primary reasons for the Gauchos’ loss, which put an end to UCSB’s six-game unbeaten streak. This has been the only loss the team has suffered in conference play so far.

At the time, the win allowed UC Davis to slide into a three-way tie with UCSB and Sacramento State for first place in the Big West’s North Division. 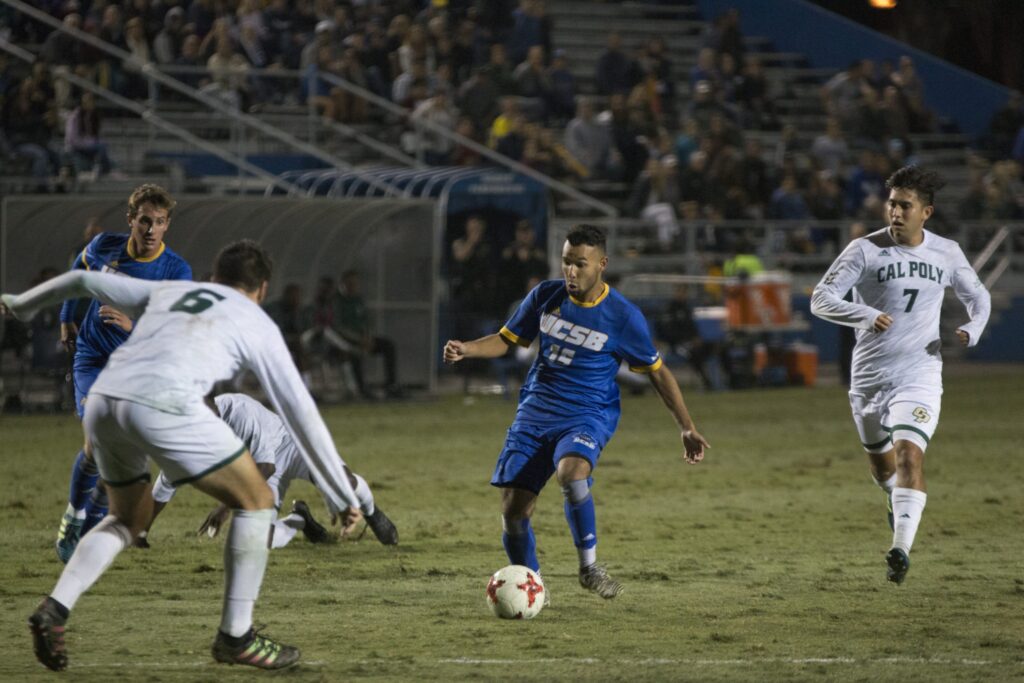 With the aforementioned win against Sac State, however, the Gauchos have now jumped back into the top spot, and it definitely helps that they have had better showings against other conference opponents and do not look to be in the struggling form they were in when they played earlier in the season.

Despite the match ending in a draw, UCSB played a tough match against Cal Poly last week, during which both teams gave their full effort in trying to come away with the victory.

Carrillo has played outstandingly, and his six shutouts are a testament to his ability as a goalkeeper. The six clean sheets on the season for the keeper also speak to the defensive success of this team, as the Gauchos have often relied on their defense to keep them in a game in which their offense was slow to start.

His 0.96 goals against average ranks first in the Big West, while his 0.75 save percentage ranks second and his 15 goals allowed ranks third.

The offense has shown their strong capability to score throughout the season, particularly in a 5-2 win against Cal State Fullerton. Fellow freshman forward Randy Michael played a huge role in the Gauchos’ offensive resurgence over the last nine games, in which they’ve gone 6-1-2.

Michael has scored all seven of his goals in these past nine games, including two scores against Sac State on Wednesday.

The seven shots in goal rank tied for second in the Big West. The California native also has four assists on the year, the best mark on the team, as well as his 18 total points.

The Saturday night match presents an opportunity for the youthful squad to address the problems seen in their last matchup against Davis: defensive struggles from the keeper down through the defense and onto an offense, which could not answer Davis back after allowing each goal.

UCSB has a very good shot at seeing Davis again in the postseason, and it will be better for the Gauchos to beat Davis and address the concerns now than to have to do it later on, especially when it comes to securing a possible first-round bye for the first week of the Big West Tournament.

The Gauchos will play the Aggies at 7 p.m. on Saturday, Oct. 21, at Harder Stadium.