The Daily Nexus
Opinion
Fight for Your Right to Party Politik
October 18, 2017 at 4:26 pm by Shyam Sriram and Adam Wolfe 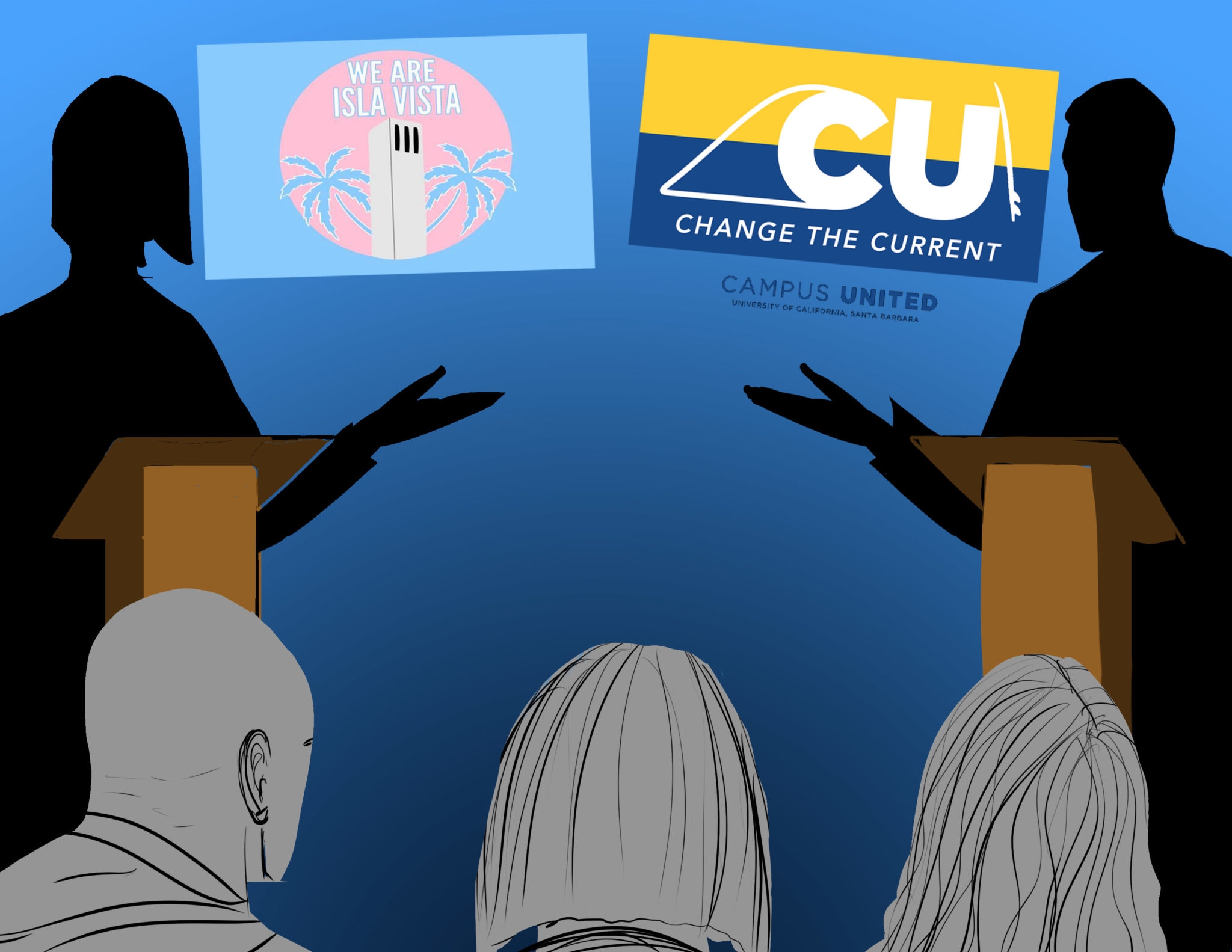 2017 marks the 25th anniversary of an inconspicuous trend that has characterized campus elections at UCSB — the presence of unique political parties to field candidates for Associated Students (A.S.) elections.

While most colleges and universities contain one or more chapters of organizations such as College Republicans, College Democrats or Young Americans for Liberty, we are specifically referencing what we term campus-specific political parties (CSPPs). From the humble creation of the Student Action Coalition (S.A.C.) in 1992 to the current rivalry between the Isla Vista Party and Campus United, CSPP have provided a lively environment for campus politics at UCSB.

A.S. is the student government for UCSB, and like the Madisonian model of separation of powers, it consists of three branches of government (but with a limited Judicial Council). A.S. uses a plural executive model, which is common at the gubernatorial level in many states; the president is the chief executive, but there are three vice presidents and a student advocate general. The Senate (formerly Legislative Council) consists of 25 elected senators who serve on committees and have different constituencies.

Most Gauchos ignore or neglect to understand how students’ lives on campus are influenced by the decisions made by Associated Students.

Like the larger model of party politics that has been a fixture of American elections since the late 18th century, parties are not static and constantly evolve, sometimes carried by particularly charismatic candidates and other times by the party branding. It is easy to think about elections in terms of the two major parties, but what it means to be a Democrat or a Republican has constantly shifted as platforms have continuously evolved, yielding different platforms and mercurial understandings of what it means to be a partisan.

The same is true of UCSB’s culture of campus-specific political parties. While some of these CSPPs were created to run candidates for one or two specific elections (Gauchoholics, Better Our School System, Free Thinking Patriots), others have endured with a few name changes (Students’ Party became Students’ Voice, which later became the Democratic Process Party).

Additionally, two campus-specific parties had remarkably strong electoral runs and dominated student government: the S.A.C. from 1992 to 2005 and the Open People’s Party (OPP) from 2006 to 2016.

These party realignments have also been a function of a constant, electric atmosphere that accompanies the campaigning surrounding the annual A.S. elections during which members of the executive, legislative and judicial councils are elected using a single-transferable vote (STV) ballot and where turnout averages about 40 percent of the undergraduate enrollment. Elections have yielded incessant debate on the role that Associated Students should play on this campus.

Should A.S. be focused on larger political issues or put students and the campus first? Should its methods be through direct action or more symbolic resolutions? Should A.S. represent the majority of students or pay greater heed to voiceless special interests?

CSPPs foster greater political engagement and allow undergraduates to learn about elections, parties, platforms and the democratic process, all the while engaged in collegiate governance.

Most Gauchos ignore or neglect to understand how students’ lives on campus are influenced by the decisions made by Associated Students. Every time you use the A.S. Bike Shop or Food Bank, receive funding for your club’s events, see live music or a comedian on campus or even listen to KCSB, you fall under the programming created and funded by A.S. It is the elected voice of the UCSB community, representing the views of the student body en masse for Isla Vista, Goleta, Santa Barbara, the county and even the state. The elected members carry out an important political function all while also maintaining busy lives as students.

UCSB is more than just another university: it is a national leader in research and the public education of a large and diverse student population. CSPPs foster greater political engagement and allow undergraduates to learn about elections, parties, platforms and the democratic process, all the while engaged in collegiate governance. We hope this rich and civic-minded tradition continues.

Shyam K. Sriram is a Ph.D. candidate in the Department of Political Science and Adam Wolfe is a fourth-year political science major.

Annoying A.S. nerd comment but Judicial is actually appointed through the President’s office and confirmation by the Senate. Just like the supreme court! Funny enough, they are also appointed for “life”, which means until they graduate.

Isn’t this the kid who badly lost the election because he posted a snapchat of him bragging about his party bus being funded by student fees?