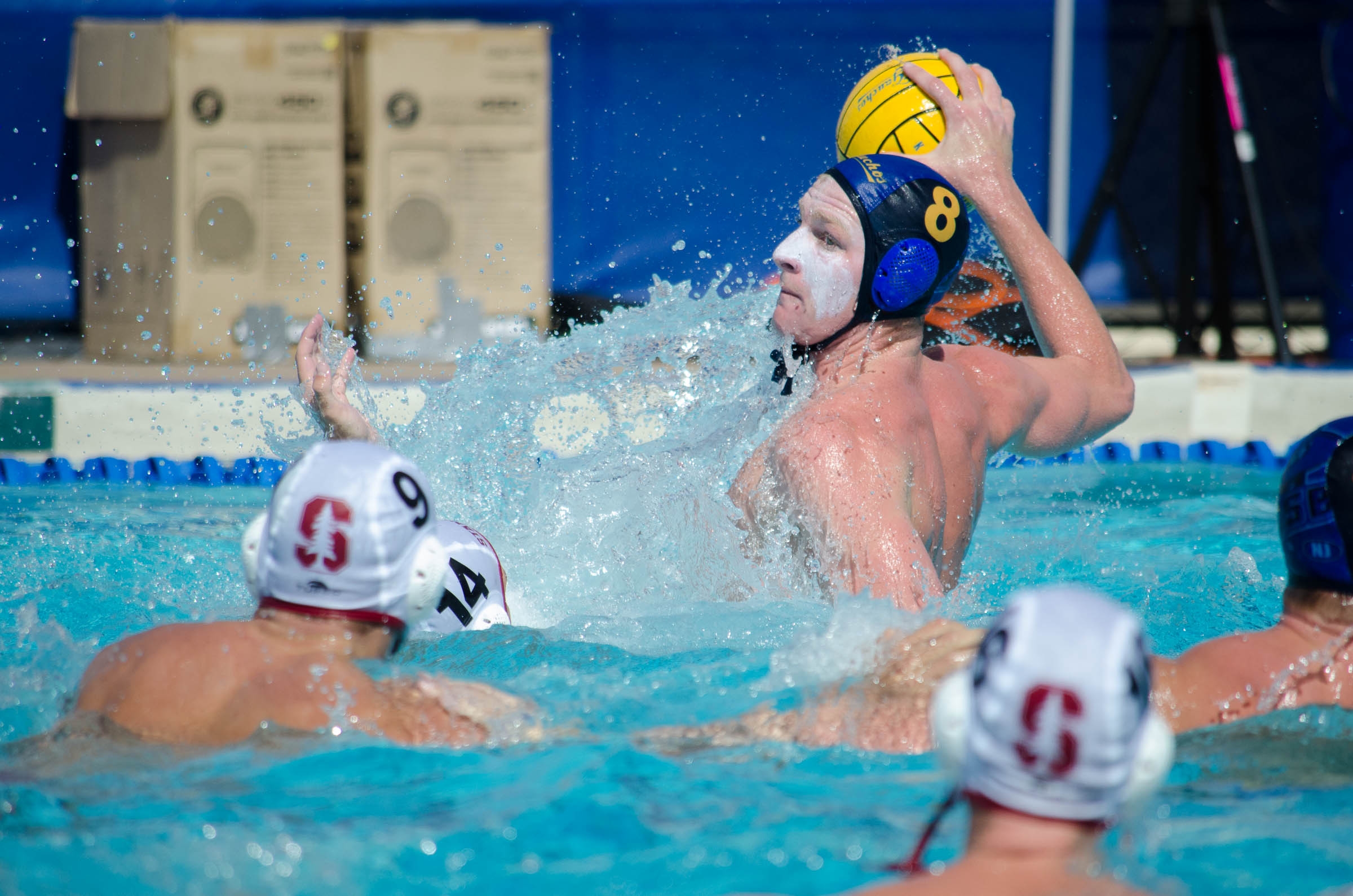 But for the Gauchos star senior attacker Shane Hauschild, Friday’s game goes beyond the one in the pool and dives into a much deeper bond, family.

For the third time in his career in the span of a full calendar year, Shane will face-off against his younger brother, sophomore driver Ben Hauschild.

Both Santa Barbara natives, the two Hauschild’s were used to playing with each other on the same teams in both the High School level at San Marcos and at the club level while also attending matches at UCSB’s Campus Pool.

The two brothers were introduced to the sport by their younger sister who had been playing since she was 10. She is now currently a freshman at USC and is a member of the Trojans’ women’s water polo team as a driver after graduating from San Marcos High.

Once introduced, Shane and Ben loved the sport and before you knew it, the Hauschild family had another connection point: water polo.

“We went to try it, immediately loved it and made it our top priority so it really united all of us because we all had our different paths but water polo connected us. It definitely been a huge positive,” Shane said.

“She [the sister] definitely started the water polo trend in the family and then my parents caught on, became the biggest supporters and we all then grew to love the sport immensely uniting us even more,” Ben added.

With Shane being a year older, he was the first of the two to get the opportunity to go to University and continue his water polo career. In that 2014 season, Shane won the MPSF Freshman of Year after a 32-goal season while Ben led his high school team to its first league title in 20 years.

What Shane accomplished his freshman year was remarkable, however, just the fact he was able to continue his water polo career at a Division-I NCAA level was incredible on its own when you consider only 2.8 percent of US High School Water Polo Players compete at NCAA I schools.

Now after looking at that, it’s even more incredible to consider that the younger Hauschild was also able to get his own Division-I opportunity, opting to go to San Jose State, a school that is new to the water polo scene.

“I heard it’s going to grow quickly and I could’ve gone to a more established program and do something that’s already happened,” Ben said. “Or I had this unique opportunity to come to San Jose State and work with a program, build a program and be a big name on a growing program.”

After the decision was made, an even more amazing coincidence happened. UCSB, along with a few other programs, seceded from the MPSF, their former conference, and established the GCC, a conference that added San Jose State along for the ride.

The move, unknowingly, set the stage not just for this Friday’s match, but last years match.

Nearly one year ago to the day, the two brothers faced off for the first time ever at Campus Pool and to this day remember the feelings of that night.

“It was the most anticipated match for me all season long,” Ben said. “I definitely tried to take it to another level. I didn’t want to get bested by him so there was definitely some extra adrenaline playing each other.”

Not just happy that they got to play each other, Ben and Shane were also excited to be able to play in Santa Barbara, the place they grew up and the place that held all their friends and family.

After the match, UCSB, a heavy favorite, came out the victor 13-7 to no one’s shock, but the brothers never shared a moment of displeasure with each other.

“Even though we are supposed to be rivals I know he is still my brother. It’s more of a fun rivalry as compared to an actual competitive rivalry. We both want the best for each other,” Shane said.

Even though Ben and his team came out the loser, he was never unappreciative of the fact he got to go toe-to-toe with his big brother.

“I feel gratitude playing against him. I don’t feel the need to outperform him, I don’t want him to play bad or anything like that,” Ben said. “I am just trying to put on a good show and performance for my team and I know he’s going to do the same.”

Like brother, like brother both Shane and Ben say playing in that Oct. 14 conference game last year at Campus Pool has been the favorite moment of their collegiate careers with both even pointing to the end of the match specifically.

“Best moment was by far end of the game last year at UCSB,” Ben said. “Knowing I did my absolute best and kind of my coming out party because since then I have played my game but just playing in front of that crowd, in that pool and playing in a place I saw games at growing up was amazing.”

“My favorite moment was after the game last year because we just gave each other a big hug after the match and just talked,” Shane said. “Everyone of our friends and family came up super stoked and we all reflected on the game and it was super cool.”

Looking ahead to Friday’s match, which could be the last time the two ever play each other again with Shane being a senior unless they meet at the conference tournament, both brothers are looking for the win, but even more than that, both are looking to cherish what could be the end of a fun era.

“I definitely want to make the most of this game,” Ben said. “With this being the last time we could play each other I am going to go all out, hope for a good result and I think it will be a good game between us.”

Of course, Ben is not particularly shy about making his goal known of hopefully being able to pull off the upset this Friday. In fact, it would be his version of a perfect ending to this brotherly trilogy.

“Perfect ending would definitely be beating UCSB which had been a huge motivation for me since coming here, I couldn’t ask for anything more than to score an upset over UCSB while he [Shane] is still around,” Ben said.

Getting more specific, Ben added he would like a “close one-goal game in overtime with SJSU coming out the victor with me scoring the final goal over my brother and against one of my closest friends [Justyn Barrios, UCSB’s goalkeeper] to seal the win.”

On the other side, Shane has never been one to tease his brother over the fact his team has gotten the better of him twice in this rivalry but he also recognizes, winning is better than losing.

“I’m not going to lie, I would be upset if we lost,” Shane laughed. “Not at him obviously but more so at myself and our team. He would probably rub it in to make me mad but it would also be a good memory. I would definitely want to get my revenge at that tournament at that point.”

With that, Shane’s perfect ending to this trifecta would be as follows.

“Perfect ending would be us coming out with a win but my brother comes out happy after a great game, then after the game, we hug it out, go get dinner with our parents and be happy.”

No matter the outcome, no matter the whose version of a perfect ending comes true, no matter anything, the two brothers have made it clear that this game means more than just the scoreboard.

The two have been connected for a long time thanks to water polo, and it’s because of water polo that they get this special platform to go head-to-head one more time.

Cherishing the moment is more important for them than ever holding ill-will toward one another for something as simple as winning and losing.

Because as far as this writer is concerned, both Ben and Shane Hauschild have already won at something much more important: happiness. A word that perfectly encapsulates the feelings this two share when they are in the pool whether it be with each other or against one another.