The Daily Nexus
Water Polo
No. 8 UCSB Wins Physical Matchup at Home Against No. 9 Pepperdine
October 6, 2017 at 8:05 pm by Calvin Thrift 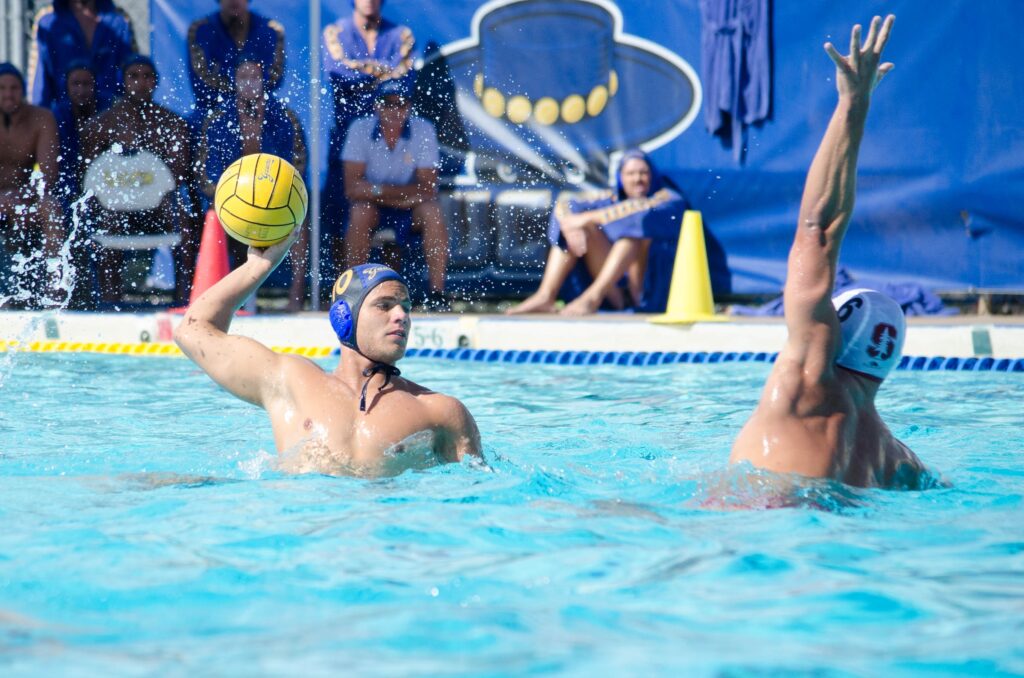 The UCSB men’s water polo team came out of the gates with something to prove Thursday night. Santa Barbara certainly made a statement with its 9-8 victory over Pepperdine in its midweek match.

UCSB is now 9-5 on the season, while Pepperdine falls to 13-7 overall following Thursday night’s game.

Despite their 12-9 loss to No. 3 Cal the past Saturday, the Gauchos demonstrated with their win over familiar opponent Pepperdine that they are focused on developing and sustaining momentum in the last stretch of their season.

The Thursday night game began with UCSB winning the sprint and being met by a pesky Pepperdine defense eager to disrupt the Gauchos’ game plan. After a few possessions in, which each team came up short of scoring, the Waves got on the board first via a Marko Asic goal with 5:18 remaining in the first quarter.

UCSB didn’t stay behind for long; however, as the Gauchos answered 18 seconds later with a goal of their own courtesy of redshirt freshman Adam Lott.

With the game tied 1-1, Pepperdine redshirt senior Mark Urban reached the net to give the Waves a 2-1 lead at 4:37 in the first.

Following a couple unsuccessful attempts at capitalizing on Pepperdine exclusions, UCSB eventually tied the game 2-2 after a steal at one end led to freshman attacker Cole Brosnan’s goal on the other, leaving only 1:29 left in the quarter.

With the quarter coming to a close, a Pepperdine exclusion led to a goal by none other than junior Boris Jovanovic. Jovanovic’s capitalization off the power play was perfectly timed as well, leaving the Waves with only two seconds before the break.

At the end of the first quarter, UCSB led Pepperdine 3-2.

After winning the sprint to start the second quarter, UCSB senior Reed Cotterill quickly extended the Gauchos’ lead to 4-2 when he scored at the 7:24 mark.

Pepperdine seemed to have plenty of opportunities following the Cotterill goal, but Barrios again came up big with talented saves to keep the Gauchos’ two-goal lead. With momentum off of their defensive stand, the Gauchos increased their lead to 3 through Adam Lott’s second goal of the night.

With 5:57 remaining in the second quarter, Pepperdine found themselves getting the ball back down 5-2 but still determined to get past Barrios. With 4:01 remaining, the Waves finally scored again with a goal from sophomore George Mooney to make the game 5-3.

Pepperdine seemed unable to catch up to UCSB; however, as the Gauchos’ leading scorer sophomore utility Ivan Gvozdanovic fired in a shot to goal which put the Waves down 6-3 with only 2:04 left in the half.

Following a hectic sequence in which both teams had chances to capitalize, the horn sounded to end the second quarter, leaving the Gauchos in the lead 6-3 at the half.

Despite losing the sprint to start the third quarter, the Waves increased their physicality to start the second half in order to generate offense. Sophomore Mate Toth earned the honors of bringing his team within two by taking advantage of a UCSB exclusion with 7:07 on the clock.

The Waves used this physicality to hold the Gauchos scoreless throughout the third, but Pepperdine failed to score again after a goal by senior Chandler Rockwell brought them within 1 with 6:07 still to go in the quarter.

The rest of the third quarter saw a handful of turnovers and missed shots by both teams, as well as some more crowd-sparking saves by Justyn Barrios.

Wasting no time, the Waves won the sprint to start the fourth quarter and broke down the Gauchos’ defense over a few possessions to eventually lead to Mate Toth’s second goal of the night with 6:48 remaining to tie the game up 6-6.

After a few minutes of back and forth play, the Gauchos again took advantage of a Pepperdine exclusion via a goal by senior attacker Josh Jordan. After converting on the power play to go up 7-6, UCSB went up 8-6 courtesy of Ivan Gvozdanovic’s goal with only 3:40 left on the clock, forcing a Pepperdine timeout.

After two more clutch saves by Barrios, an odd mix up from the Gaucho bench resulted in the Waves being given a free 5 meter shot. Asic eagerly scored the free shot to bring his team within a one-point deficit of 8-7 with 1:56 remaining.

The Gauchos refused to allow a Pepperdine comeback, as Boris Jovanovic scored his second goal of the game with just 1:14 on the clock. With just 13 seconds left on the clock and the Gauchos up 9-7, chants of “this one’s over” by the home crowd seemed to inspire the Waves to score their final goal, which was netted by junior utility/attacker Marko Asic with 11 seconds left.

The Gauchos ran out the remainder of the clock to secure the 9-8 victory.

While the Gauchos and Waves ended up only being separated by one goal, anyone at Campus Pool would attest to how important Barrios’ performance was throughout the game.

Head Coach Wolf Wigo had high praise for his sophomore goalkeeper after the game.

“He played great that game,” Wigo said, “had a lot of big saves. He definitely helped us build that lead.”

With an outstanding 13 total saves on the night, Barrios has shown he is worthy of his coach’s compliments.

Coach Wigo’s praise has a lot of weight to it, as the former captain of the USA Water Polo Men’s National Team and three-time Olympian has a good idea of what it takes to win.

UCSB will face No. 1 USC at noon this Sunday, Oct. 8 at Campus Pool.