Rust can be seen on any old beach cruiser and, while unsightly, it can become dangerous and costly if any metal undergoes the process of corrosion.

According to UC Santa Barbara chemical engineering professor Jacob Israelachvili, corrosion is a major problem, especially a form known as pitting corrosion, or pitting. Pitting is a form of extremely localized corrosion that leads to the creation of small holes in the metal.

Additionally, corrosion is a problem when it occurs in confined spaces, such as in thin gaps between machine parts, the contact area between hardware and metal plates, behind seals and under gaskets and in seams where two surfaces meet.

With the device, Israelachvili and his team were able to analyze the corrosion processes in real time.

Even with the EC-SFA, only a few techniques are able to directly measure and study corrosion in situ at relevant length scales, leaving even more uncertainty surrounding the initiation and early growth of dissolution or corrosion processes in confinement. As a result, the understanding of early-stage reactivity in confinement remains challenging, and more detailed nanoscale characterization methods are required to develop a deeper understanding.

“With the SFA, we can accurately determine the thickness of our metal film of interest and follow the development over time as corrosion proceeds,” Kristiansen said. The researchers’ setup also allowed them to have control of the salt composition of the solution and temperature as well as the electric potential of the nickel surface.

Pitting corrosion is driven by an aggressive ionic environment and oxygen depletion in the stagnant electrolyte of growing pits on a surface exposed to bulk solution. Crevice corrosion is a related form of localized or confined corrosion that may occur within cracks and crevices where depletion and reduced transport of species such as oxygen may lead to the development of aggressive media and local corrosion potentials. 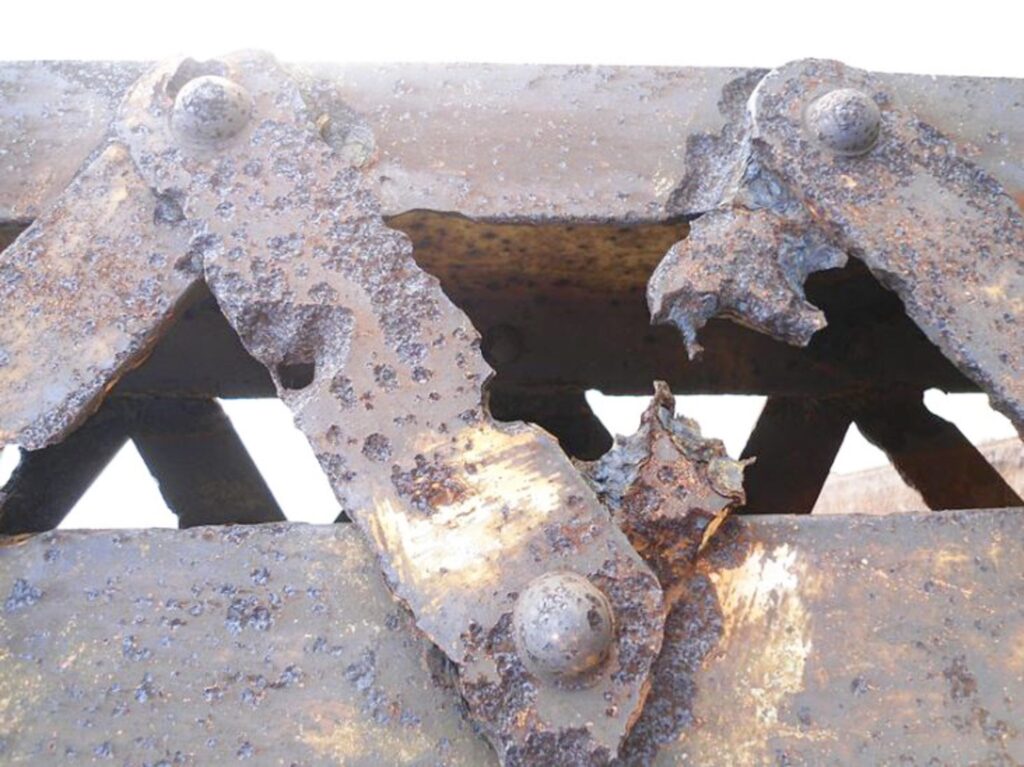 The picture above is of one of the trusses of the Nandu River Iron Bridge located in the Hainan Province of China. When pitting happens, holes like the ones above weaken the structure. Due to the corrosion, flooding collapsed the western part of the bridge in Oct. 2000, prompting safety concerns. / Courtesy of Wikipedia

For this experiment the researchers studied a nickel film against a mica surface. They focused on the initiation of corrosion, the point at which the metal surface begins to dissolve. They observed that the degradation of the material did not occur in a homogenous fashion. Rather, certain areas, like locations where there were likely microscale cracks and other surface defects, would experience intense local corrosion, resulting in the sudden appearance of pits.

This makes the process of corrosion anisotropic; its properties have a different value when measured from different directions. Even at the crevices, there are different things happening near the opening versus deep inside the crevice. This is due to diffusion occurring, which affects the rate at which the metal dissolves both in and out of the crevice. It is a very complex process, according to Israelachvili.

“One of the most important aspects of our finding is the significance of the electric potential difference between the film of interest and the opposing surface in initiating corrosion,” Kristiansen said. When the electric potential difference reaches a certain critical value, the more likely corrosion will begin and the more quickly it will spread. In this case, the nickel film experienced corrosion while the more chemically inert mica remained whole.

It is a matter of prolonging the lifetimes of metals and devices, Israelachvili suggests, especially when devices can be very small and can be put in the body. Understanding how to properly protect corrosion-prone surfaces will reduce the need to replace them due to damage.

Conversely, understanding how to accelerate dissolution where it would be appropriate would also be beneficial, such as with nontraditional cements that produce less carbon dioxide.

The study is published in the Proceedings of the National Academy of Sciences, and research on this project was funded in part by the U.S. Department of Energy.