The Daily Nexus
Science & Tech
Past Tsunamis May Predict Future Ones
October 5, 2017 at 5:43 am by Stephanie Pernett

Recent tsunamis created by large megathrust earthquakes in Sumatra, Chile, and Japan resulted in large losses of life and extensive damage to coastal infrastructure. Earlier work has documented the inland extent and frequency of past tsunamis; however, little is known about the magnitude of material eroded during prehistoric tsunamis and how erosion and coastal recovery are recorded in coastal stratigraphy.

A group of UC Santa Barbara geologists and their colleagues were able to image and quantify coastal erosion experienced during a late Holocene Cascadia subduction zone earthquake and tsunami along the northern California coast. The team used ground-penetrating radar (GPR) to search for physical evidence of a large tsunami in Crescent City some 900 years ago.

The team found that a giant wave removed three to five times more sand than any historical El Niño storm across the Pacific Coast of the United States. 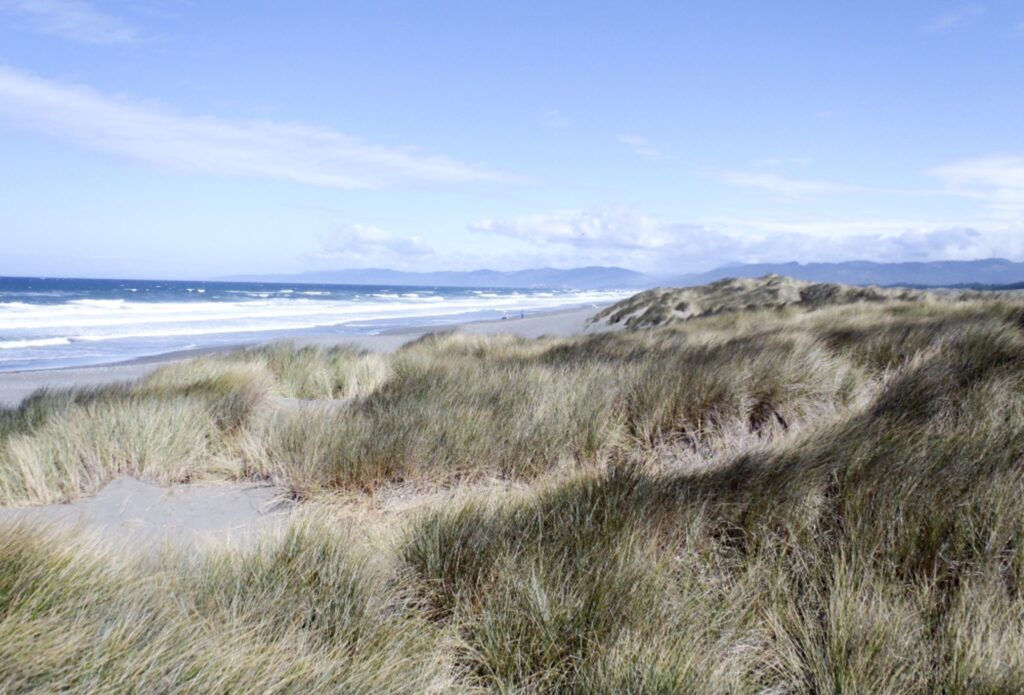 Above is picture of a beach near Cresent City. Along with the team finding that a tsunami removed more than three to five times the amount of sand than any El Niño storm, the researchers also estimated how far inland the coast eroded. The beach was eroded more than 360 feet inland. / Courtesy of Alexander Simms

The GPR profiles illustrate three stratigraphic signatures created during co-seismic subsidence and tsunami erosion and coastal recovery. The first is erosional truncation of the underlying seaward-dipping reflections created by pre-tsunami normal beach progradation. The second is a series of landward-dipping, flat-lying and channelized reflections marking the filling of erosional topography and coastal reworking of the irregular shoreline following inundation and erosion. The third is an abrupt landward termination of the stratigraphic unit marking coastal straightening and post-tsunami rejuvenation of normal coastal progradation.

“We found a very distinct signature in the GPR data that indicated a tsunami and confirmed it with independent records detailing a tsunami in the area 900 years ago,” lead author Alexander Simms, an associate professor in UCSB’s Department of Earth Science and the campus’s Earth Research Institute, said. “By using GPR, we were able to see a much broader view of the damage caused by that tsunami and measure the amount of sand removed from the beach.”

This study provides the first quantitative estimate of the amount of coastal erosion from a prehistoric earthquake and tsunami and outlines a strategy for estimating erosion during similar events elsewhere.

According to Simms, the magnitude and geography of that epic wave were similar to the one that occurred in Japan in 2011. Geologic records show that these large tsunamis hit the northwestern United States every 300 to 500 years. The last one occurred in January 1700, which means another tsunami could happen any time in the next 200 to 300 years.

When a tsunami recedes from land, it removes sand and reshapes the coastline. In the case of the event 900 years ago, the beach was eroded more than six feet down and more than 360 feet inland.

While the erosional scar can heal rather quickly, the coast is initially reshaped due to newly formed channels, cuts and scrapes. Once the beach fills in, the coastline straightens and returns to what it looked like prior to the tsunami, according to Simms.

The paper demonstrates this process after the Sumatra tsunami on Dec. 26, 2004, with satellite imagery taken before the event, one month after and four years later.

“The important thing to remember is that these tsunamis can erode the beach up to 360 feet inland,” Simms said. “That means you have to be far inland to be safe when one of them occurs.”

Their findings appear in the journal Marine Geology.