The Daily Nexus
Sports Blogs
Why Sports and Politics Must Mix: Introducing Uncomfortability
September 28, 2017 at 5:10 am by Omar Hernandez

Almost exactly one year ago, Colin Kaepernick made the decision to sit during the national anthem at a 49ers pre-season game. Although portrayed as a rash, attention-seeking maneuver by much of the press, the truth is actually quite the opposite. Kaepernick had been auditing classes at CAL with the guidance of doctoral candidate Ameer Hasan Loggins and reading up on the teachings of Frantz Fanon and Patricia Hill for months before the protest. Yet he was still depicted as ignorant by some and as cluelessly abrasive by many.

The protest lit up the media headlines like wildfire. Here was a young black athlete shunning one of the hallmarks of both American society and the sports world to call attention to the injustices that people of color continue to face in this country, which was not unprecedented considering the actions of a sports icon such as Muhammad Ali, who refused being inducted into the army in 1967 in defense of his civil rights. But it still felt shocking.

The reactions to Kaepernick’s protest were varied, from claims that he was “disrespecting the flag” to the eventual dismissal of his message because he was not a starter on his team. However, one of the most popular oppositional viewpoints was that he, and athletes as a whole, should “just stick to sports.”

The “stick to sports” mentality is birthed by a mix of both historical ignorance and racism, but through analyzing why people continue to hold onto this notion, we can actually get to the heart of the issue that Kaepernick is protesting, the endemic and systemic racism that continues to plague our country. 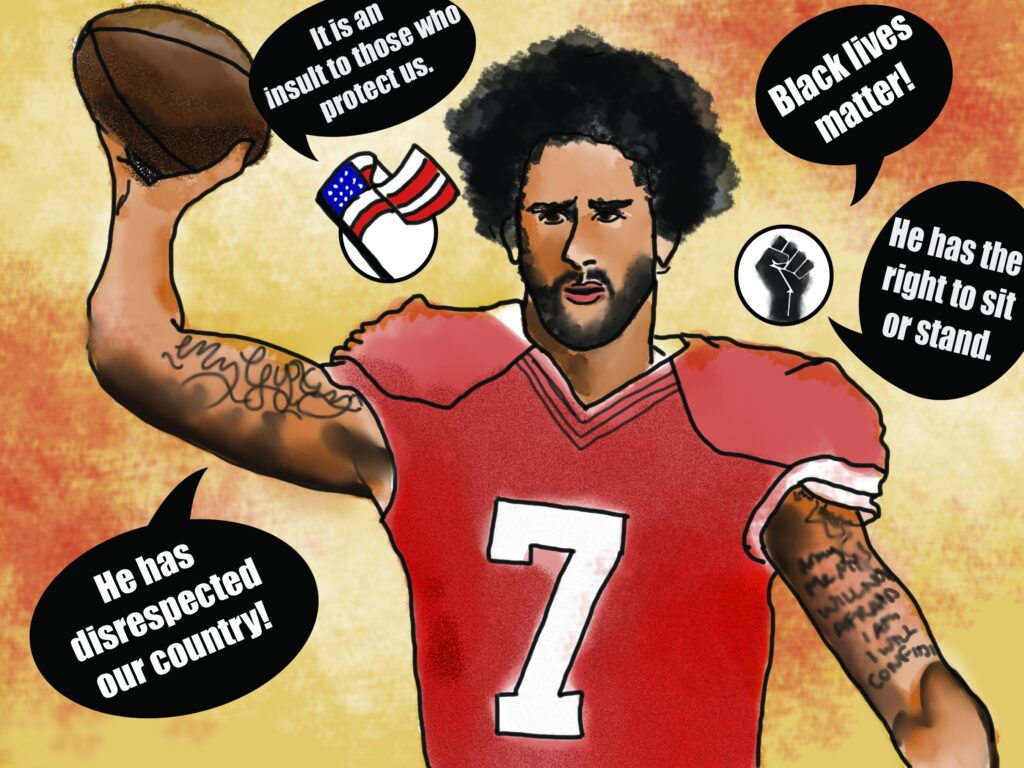 Sports, just like fine arts or music, holds the unique yet almost paradoxical position of both being a reflection of and creator of culture. Athletes such as Allen Iverson and Michael Jordan have established themselves in domains that are typically considered outside the boundaries of the playing field/court. Jordan created a streetwear empire and A.I. gave countless young black and brown kids the confidence and swagger to represent themselves and their cultures unabashedly.

They were not exempt from the stigma or restrictions that usually accompany emphatic expressions of blackness; however, Iverson learned the hard way when his style of dress was used as the basis for a racially tinged dress code established by the NBA at the height of his career. The fact that athletes themselves have the unique power to capture the minds of such a large audience while operating in the institution of sports (that, just like any other large institution, is marred with the racism and discrimination of its society) is reflected in the rich history of activism as well as the dark past of discrimination that has been a part of all sports since their inception.

The usage of sports as a conductor for social justice is not a new or novel concept, as exemplified from the gladiator uprisings of Ancient Rome to John Carlos and Tommie Smith raising their fists at the 1968 Summer Olympics. It is not too surprising that the “stick to sports” crowd is ignorant of just how antithetical that statement is to the core of what sports are or have been. However, it is not just ignorance that compels people to spout this backward thinking. There is a deep-seated sense of pain and discomfort for many white Americans in seeing this activism that is often not talked about but is rooted in the dehumanization of the black athlete.

We all mythologize athletes. Sports fans often will often talk about how basketball or football is an escape for them, a game that takes them away from the harshness of the real world. Athletes are the vessels for our hopes, our dreams, even our insecurities.

We rely on their labor for our entertainment; however, when their humanity interrupts or overshadows this very same entertainment, fans face a conundrum.

We must strip athletes of most of their identity or personhood because if athletes are humanized, then the illusion is shattered. Many white fans don’t want to look at the face of their favorite athlete and see blackness. I don’t mean phenotypic brown and black skin but rather the deep-seated pain of a people who have been oppressed for centuries.

Michael Jordan understood this very well. As the famous story goes, when asked why he didn’t speak up more for social causes, Jordan answered, “Republicans buy sneakers, too.” When Michael Bennett or Thabo Sefolosha speaks up against the police brutality they’ve encountered, or when Kaepernick elaborates on the school-to-prison pipeline, many sports fans are forced, for the first time, to truly look at these athletes as black and at just how much that affects their lives.

These athletes can no longer be everyone’s vessel, because to be a vessel is to be empty, to be neutral, and in the face of institutionalized racism and violence, neutrality is impossible. It is hard for many white fans to understand this because it is not what they were taught. Sports is supposed to be a meritocracy, a great equalizer, but the truth is that meritocracy in our current state is just another facade.

It then makes sense why the rallying cry is not “racism doesn’t exist” but “stick to sports,” because to admit the reality, that these black athletes are intelligent, that they do have a strong pride in their identity and that the institution of sports is not exempt but rather perpetuates the very same racism that is rampant in this country, would then force fans to disrupt the status quo, to have to take action, and for too many white fans, being comfortable is more important than working toward justice.

Ultimately, the biggest reason that the reaction toward kneeling and activism in sports has been so visceral and negative is not Trump, it’s not the military and “patriotism,” and it’s certainly not that athletes aren’t able to articulate their positions effectively. The reason is that, just like any other time a racial injustice is brought to the forefront of the national conversation, it is making those who find comfort in white supremacy uncomfortable. What athletes and other political activists know, however, is that change only comes from discomfort, and if “mixing” sports and politics is what is causing this discomfort, then that means we are on the right track.