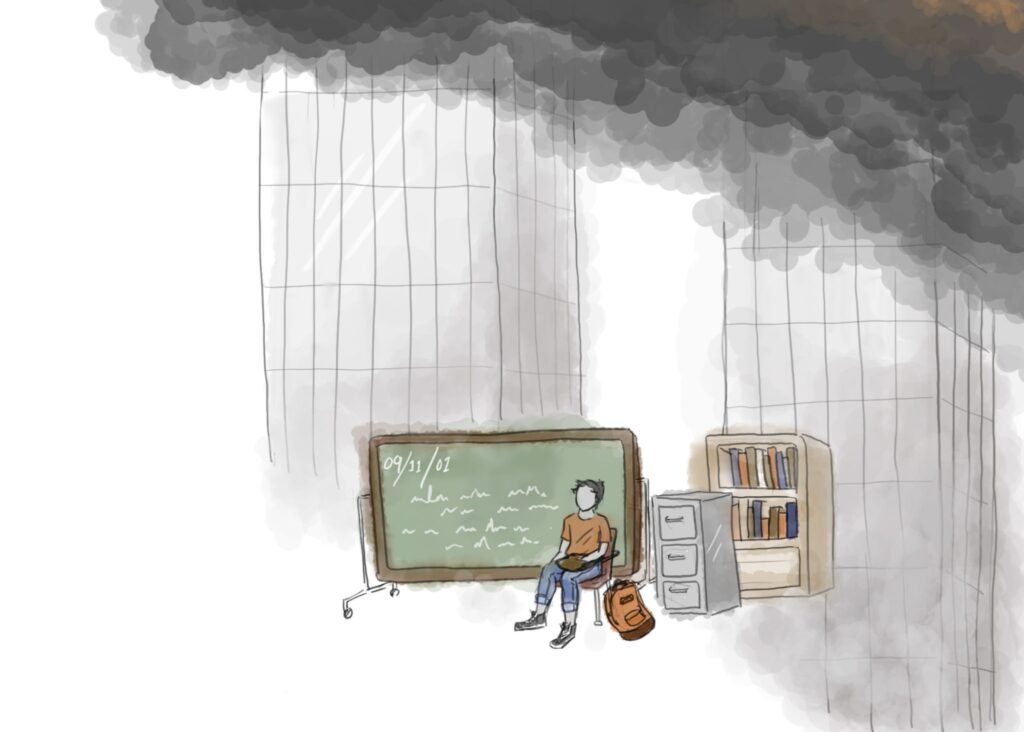 The attacks of September 11, 2001 struck our generation when we were just settling into rambunctious toddler years, and it’s often difficult to imagine how we would process this event if we watched it unfold today.

Sixteen years ago on this date, UC Santa Barbara students were wrapping up summer sessions and preparing for the start of Fall Quarter on September 24.

As phone calls and news reports reverberated through the country, UCSB students packed their bags and returned to college in a forever changed United States.

In memory of the lives lost on September 11, we have compiled some reflections from former students and Nexus editors who attended UCSB in 2001.

“I would have been on the plane that hit the Pentagon, but I’m not really much of a morning person and had booked a later flight instead. I remember wondering if M.J. — the chief flight attendant on Flight 77 — was flirting with me one time when she was a bit tipsy at the company Christmas party. She was a cool lady and really good at her job. Also looked good in her Santa dress. My mom knew both of the pilots.”

“The entire staff plus, including former Nexus staff members, were in Pismo at a beach house for the annual retreat. I woke up that morning and the TV was on, which was strange. There weren’t that many people awake, and everyone who was awake was sitting in front of the TV. I sarcastically asked if there was another school shooting or something.

Ted Anderson, outgoing editor in chief, turned to me and his eyes were huge. He told me the World Trade Center, the Pentagon and the White House were being attacked. That planes had been flown into them. We all watched TV all morning and saw the towers fall. Eventually someone decided to turn off the TV.  There was a lot of passing of cell phones around because they weren’t ubiquitous in 2001. I had to borrow a phone to call home. My Dad was traveling for work and was under lockdown at an Air Force base in Alabama. He works for NASA and nobody knew what else was going to happen.”

“Josh Braun — the science editor at the time — ran around in circles and woke us up. ‘It’s like [the movie] ‘Independence Day!’’ The atmosphere was chaotic, surreal and us journalists were on edge. Later into the night we began debating the pros and cons of war, whether the U.S. had brought this action on itself and so on. Many responded in a very patriotic way to defend the U.S. while others were quick to point out that the U.S. contributed indirectly to 9-11. I’ll never forget it.”

“I was alone in the office finishing an all-nighter and a summer school final paper. Then some crazy dude came in and started ranting that the war of the world had started, and it was all his uncle’s fault for owning stocks. Then crazy dude turned out to have been onto something. It was a pretty good introduction to the coming decade.”

“I was working at the Monterey County Agriculture Department that summer inspecting bean fields. I was just going into work late that morning, though. The TV was on. It showed the planes hitting the towers and I remember thinking, ‘Can that be a coincidence?’ Then they came down.

People were jumping out of the skyscraper. There was chaos. And my closest friend was supposed to be at an internship on that street. Thankfully he had a cell phone (rare in those days) and he briefly got service. He was also running late for work that day. He had missed his bus. I spent the whole day in the field inspecting beans and thinking about my friends in the military. It seemed stupid to be doing that when the world as I knew it was ending.”

“I was just waking up next to my pregnant wife, Lisa, when fellow former Nexite Joel Brand called my phone and said, ‘Turn on the TV, Andrew. A plane crashed into the World Trade Center.’

I turned on CNN thinking that Joel meant something like a Cessena had hit the tower and was horrified to see the entire thing in flames. Then the second plane hit.

We were all in L.A. and safe, but the world really changed for us that day. It was particularly poignant having a baby on the way, lots of loved ones in NYC. It’s hard to imagine how the world might be different today if that hadn’t happened.”

“I was waiting in line at the San Francisco airport, about to embark on a six-month journey teaching English in the Czech Republic. An airport representative walked out and said calmly. ‘We’re sorry, but two planes seem to have crashed into the Twin Towers.’ Total disbelief.”

“I was the Director of Athletics and Media Relations at UC Riverside, and that morning I had gotten up and driven into work as I usually did. About halfway there, I flipped the radio on and found out what was going on had no idea prior to getting on the road that this was all happening… The first thing in my mind was that our women’s soccer team … they were leaving that very morning on a road trip to go to Hawaii. So they had gotten on a bus first thing in the morning, and driven this bus to LAX to get on a plane to fly to Hawaii. Nobody knew what was going on with planes grounded .We were frantically trying to figure out what was going on with on with airplanes, and all that.

What had turned out was that their plane, it had pulled into the airport terminal just as the first plane hit the tower. Every athlete on the bus, their phone rang with their parents telling them not to get on an airplane. They immediately turned right back around and drove right back to Riverside but there were a few minutes, moments of freaking out, of terror, not knowing where our students were.

As the day went on we started learning more, like the woman who was going to be the Gymnastics coach at UCSB was on one of the planes. We started learning about connections with people we knew, and people who knew people we knew; it all brought it very much home. I remember spending that afternoon at a little memorial in Hinderaker Hall at UCR, holding up an American flag with a friend and wondering what the hell was going on in our world, and what the next step was.

I was living on DP when 9/11 happened. I was getting back from exercising in the morning and doing some stretches in front of the tv when I saw the 2nd plane crash into the second tower. I thought it was a movie and everything felt surreal. Now I live in NY and worked in 4 World Trade while they were building the Freedom Tower. I watched the snipers watch Obama when he came to sign the final I-beam to be installed in the building. I always feel a weird connection to UCSB whenever I’m in the area. – 2002… Read more »