The Daily Nexus
News
University of California Says It Will Support DACA Recipients in the Wake of President’s ‘Backward-Thinking’ Repeal
September 5, 2017 at 5:53 pm by Supriya Yelimeli

President Donald Trump announced Tuesday that he would repeal Deferred Action for Childhood Arrivals (DACA), a program that protects approximately 800,000 young people in the United States from deportation.

University of California President Janet Napolitano spoke out against his action Tuesday morning, saying she was “deeply troubled” by the president’s “misguided decision.”

“The University of California will continue to stand with Dreamers and their supporters as we fight to keep the program alive,” Napolitano said in a statement, explaining that Trump’s “backward-thinking move” could destroy families and the futures of young people.

The DACA program was introduced in 2012 when former President Barack Obama signed it into law with an executive order. The UC has since admitted thousands of DACA recipients, and currently enrolls approximately 4,000 undocumented students across all its campuses, according to the UC Office of the President.

Neil Yanga, a third-year accounting and sociology major, began his first year at UCSB in 2015. He immigrated to the United States when he was three years old and is a recipient of DACA.

Like many other DACA recipients, Yanga has now spent the majority of his life in the U.S. He said his parents faced a “perpetual fear” that their family would be torn apart when he was growing up.

“My parents didn’t want me to go back to a country where I didn’t know the culture or language,” Yanga said. “It’s cruel to send anyone back to a place they’re unfamiliar with.”

Following Trump’s announcement, Yanga is concerned that he won’t be able to provide for his family. He has an internship lined up for next summer, and said he worries about losing work eligibility in the next year. 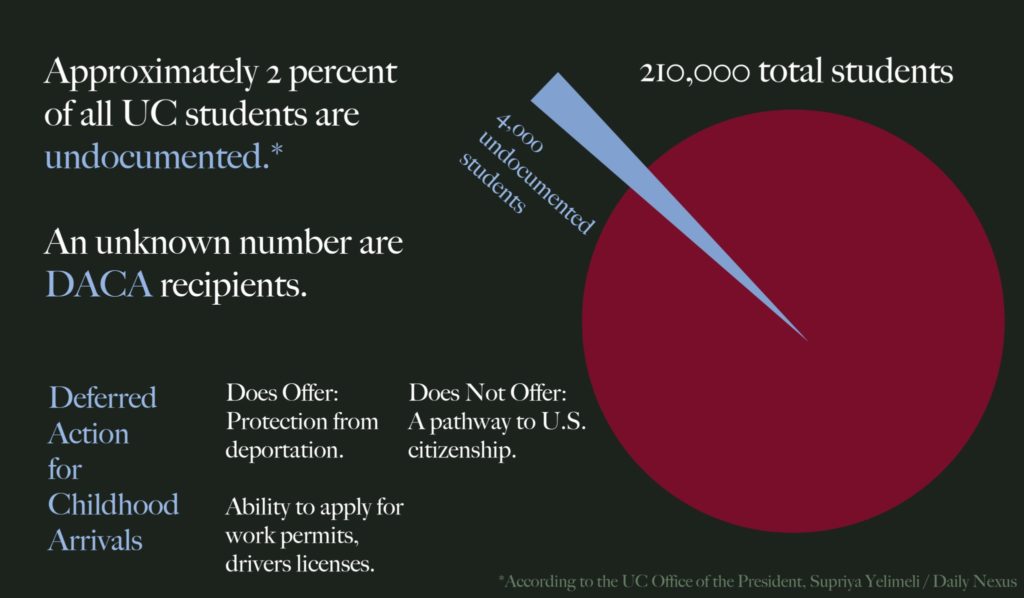 Several undocumented students have expressed fear and uncertainty over their status in the U.S., but Yanga said “we are an extremely resilient community.”

He appreciates the UC’s statements to support DACA recipients, but said administrative plans are not always executed in a timely manner, despite constant requests from students.

“There’s a disparity between what they say and what they do on campus,” Yanga said.

Yanga also noted that undocumented youth faced an uphill battle to secure Obama’s executive order, and they will now rely on activism and legislators to ensure protective measures that are not exclusive.

“We really need to reform the narrative so that it’s not a privilege to be here — it’s a right,” Yanga said. 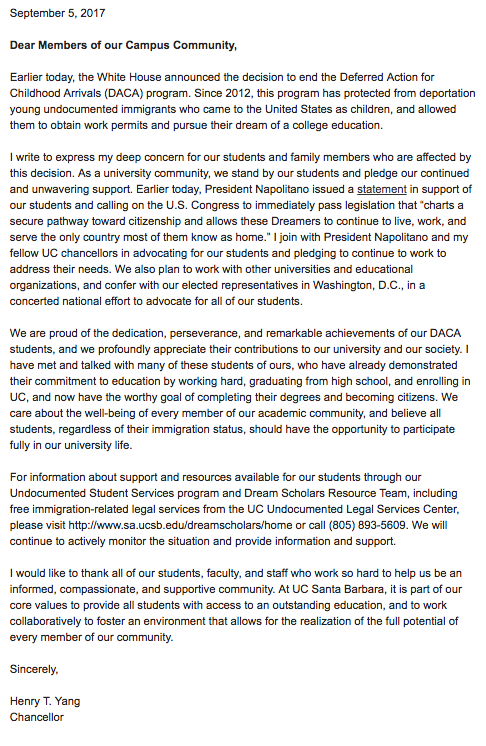 Trump has now handed over the repeal to Congress, which can suggest a replacement in six months before the president begins phasing out the program entirely.

Despite the prevalence of fear in many undocumented communities, Yanga said young DACA recipients will fight to protect each other.

“We have a really strong community that is filled with love and support no matter what kind of challenges we face,” Yanga said.

I don’t understand why everyone is making such a fuss about this… all Trump is doing is saying that this is a matter that should be decided by Congress. Let our democratically elected representatives decide the fate of illegal aliens, not one person (the president). Who knows – maybe they’ll let the illegal aliens (aka Dreamers) stay.

Just the fact that you are calling Dreamers “illegal aliens” is extremely offensive. Also “making a big fuss” you do realize this will change the lives of 800,000 people I think it’s reasonable we are making “a big fuss”.

Offensive or not, these illegal invaders are breaking our laws. For my part we ought to consider the effect on the rest of us citizens outweighs the effects on the 800K. For example, we’re spending money on their schooling that we otherwise wouldn’t be spending. That money comes from the pockets of the rest of us. Mexico certainly does not provide for illegal aliens living in their country, nor does Canada, so please spare me the sanctimony.

Correct. My parents work very hard to make a living, pay taxes, and send me to college. Why should these illegal invaders receive FREE college tuition while we’re here paying higher taxes for them to stay? They broke the law to begin with and now they want to bend the law in their favor. Shocking.

Dont be offended by definitions,
Reply to  Dreamer

By these statements, University of California President Janet Napolitano, UCSB Chancellor Henry T. Yang, Santa Barbara City College President Anthony E. Beebe are advocating breaking the current law of the United States. Favoring non-citizens over citizens is both morally wrong and makes no sense to the rational person. As federal law trumps state law, and especially so with respect to immigration, all are in violation of their oaths of office, in which they swore that they “will support and defend the Constitution of the United States and the Constitution of the State of California.” Napolitano, Yang and Beebe have chosen… Read more »

Not greasing the squeaky wheel

Differed action on children of aliens is not the law of the land. It was a statement made by your previous president, and a pledge not to deport illegal residents, unless they commit a crime. (Witch has been the standard since the 70’s) There is no disposition on the status of such “children”, even Obama stated his decree was unconstitutional. Now 9 states are suing Trump to overturn Obamas executive order, ending this dream of the dreamers. Trump is extending the order in an attempt to force the legislature to incorporate it into immigration law. Call it backward thinking, but… Read more »

“My parents didn’t want me to go back to a country where I didn’t know the culture or language,” Yanga said. “It’s cruel to send anyone back to a place they’re unfamiliar with.”

Ironic that DACAs are loved by progressives in the name of diversity, but our esteemed Sociology major admits no such diversity actually exists. Pass a law.