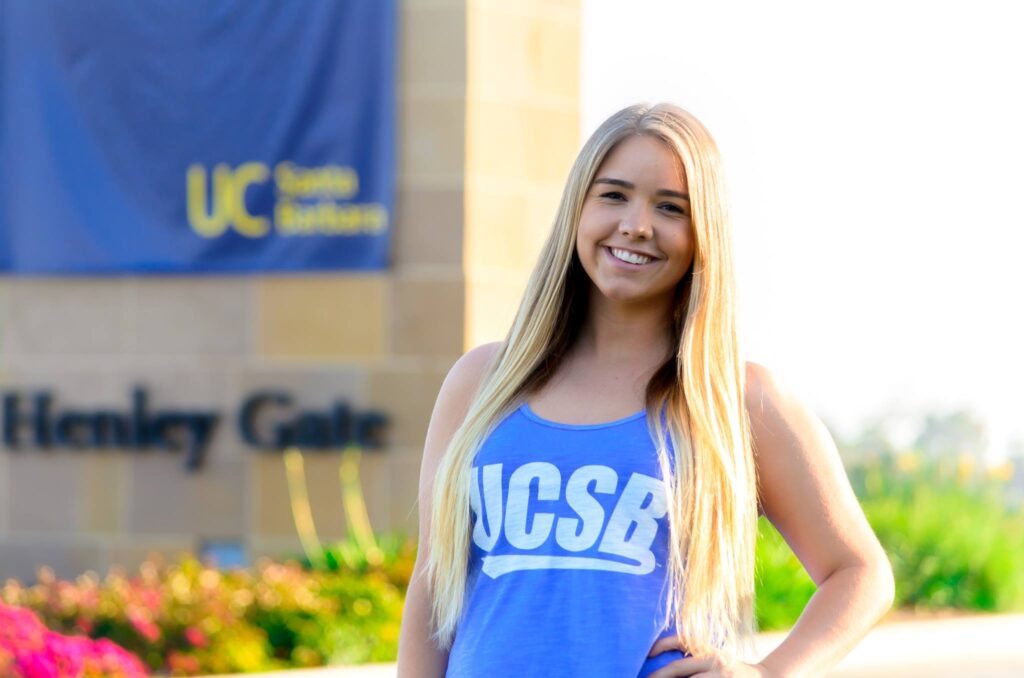 Kelly Pearman was born on April 9, 1995. She graduated from UCSB in June with a degree in political science, and belonged to the Kappa Kappa Gamma sorority, Associated Students (A.S.) and worked on orientation staff during her time at UCSB.

She participated in UCDC during the fall of her senior year and had plans to move to Washington D.C. to pursue a career in politics.

Friends said Pearman was a dedicated student and hard worker, but was always able to strike the balance between academics and making time for friends.

“She never shied away from taking responsibility, yet outside of work or school she was friendly, animated, and a wildly fun person to be around,” said Isabelle Ninh, Pearman’s friend and housemate.

“Kelly loved Isla Vista,” added Emani Oakley, who also met Pearman through A.S. “So when I imagine Kelly, I imagine her in that environment.”

Oakley said her friendship with Pearman was “natural” and came easily.

“She really had such a strong presence. You would be around her and you would just feel better,” Oakley said, adding that despite the academic rigor, Pearman made Political Science 15 a more enjoyable course.

Pearman loved pizza and Oakley said they dined at Pizza My Heart at least once a week to talk about their day.

“I want to remember her sitting in a booth at Pizza My Heart telling stories, because she was always really good at telling stories and she always had the best stories to tell,” Oakley said.

Gabriela Turner was Pearman’s “big sister”  in Kappa Kappa Gamma and said Pearman was an unconditionally loyal friend. A “Big” generally acts as a guide for their Little in a sorority, but Turner said Pearman was usually the one looking out for her.

Ninh echoed the sentiment, saying Pearman was constantly watching out for her friends — even at a music festival like Coachella.

“She was always checking in on everyone —  even strangers — offering water, asking to see if we needed to eat or sit down,” Ninh said.

Pearman enjoyed listening to a wide variety of genres, including country and electronic dance music. She went to Coachella twice and planned to go to HARD Summer Music Festival this year.

Pearman was attentive to her friends and provided them a comfort and solace, even as they dealt with worries about graduation and beyond.

“I would talk to her and we would have a heart-to-heart about the things we wanted for our lives and things we were really grateful for,” Oakley said..

Pearman impacted her friends’ lives by being present — from senior pictures to birthday brunches. As many friends reflect on their own time at UCSB, they recognize that Pearman was a vital part of it all.

“When I think about my best days in Santa Barbara — warm, sunny weather, a refreshing breeze, the beach behind me, friends by my side — I think of Kelly Pearman,” Ninh said.

“She was just there to have fun, and she did,” Hashemian added. “Never a dull moment with her. We are all so lucky to have known her.”

Pearman’s family started a UCSB memorial scholarship in her name. Donations can be sent to the UCSB Parents Fund.

A memorial for Pearman will be held on August 13 at her former home in Isla Vista.

What are the circumstances the surround her death?

It seems odd that how she died is just completely not mentioned.

How sad, how did she pass?

there’s no such thing as a deserved death you prying, judgemental tools

Hello, beginning journalist at Daily Nexus: Every obituary needs to list the cause of death, or else explain that the writer was denied that information: by mentioning that the family or the police did not want it reported, for instance. Of course, that only makes readers more curious about why the information is being withheld, a fact grieving families often don’t realize. You need to decide if you are publishing information for the sake of the readers (hint: you are) or are serving to publicize private or institutional interests (you’re not). Please report further. You can do it very compassionately.… Read more »

She passed away from alcohol poisoning.

She passed out. They put her on the couch thinking that should was fine, but she wasn’t.

Oh, Kelly. I failed you and I am so sorry.

Just alcohol and no drugs involved?
What was her blood alcohol?

Yes, other drugs were also involved.

Her parents don’t want it out there because they think that it will subtract from the memories of her.

How would you even know what her parents want?

I completely understand how her parents could feel that way, but it is clear that she was a darling, loving, talented and smart young lady, and that it what I think of when reading this story and will remember long after. It is heartbreaking to lose such a bright light. I think many want to understand the circumstances only to better educate themselves and their own children as to the dangers alcohol can pose.

But how do you know it was alcohol poisoning? Were you there with her? I am just confused on what exactly happened.

Not true. No drugs were show in the toxicology report. Just alcohol

Not true. No drugs. If drugs were involver it would be out there.

Heartbreaking – may her family and loved ones find peace.

A lot of us failed Kelly including me.

Dear Daily Nexus: Please note the very different treatment you’re giving to the toxicology report on Nikola Kapamadžin and the material that must be available about this young woman’s death. Please consider that reporting details about the circumstances might be relevant to other young people at UCSB and those who knew these young people, and to everyone who reads these stories online. This is an extremely important issue to the student culture at UCSB; substance abuse and its problems has been a focus of great concern for a very long time. It’s not ghoulish to report this carefully, factually, and… Read more »

I could not agree more.

Can’t tell if I’m reading The Daily Nexus or Fox News. Maybe they are the same.

I noticed that too!

You do realize that if a person dies in their he there is an autopsy done. He died July 5, the article about his cause of death was written August 10. Autopsys take a while.
She died July 29. There is no report yet. Maybe wait a month and see. And by the way Maura Fox is a great human. She is doing her job. Leave her alone. She’s not trying to #trigger anyone.

Both the Nexus and the Santa Barbara Independent reported the circumstances of Kapamadžin’s death within two weeks, and gave his name. Kudos to Maura if she does continue to report factually and compassionately about the circumstances of this young woman’s death. That would constitute “doing her job.”

On her Twitter page, “My only wish is that I die real.” Is this what she meant?

She references more than one alcoholic blackout on her Twitter – there is probably a gene dynamic here at work – her mom celebrated 23 years of sobriety (via Facebook a couple of years ago) – we have got to get rid of the shame and stigma and talk about this substance abuse that is killing people!

You are actually the worst type of human

Maybe in a few years you will understand what we are trying to say here. Life in college is MUCH different that life in reality. You’ll see soon enough.

This is all public information! Check out her twitter! Plus, healthy young women do not just “die in their sleep”. She put something in her body that resulted in her death. Why would we not want the entire student body to know? We might save someone!!

In reality I hardly knew Kelly we were in a couple classes in high school but she was always very nice. The fact how she died doesn’t change my opinion of her in the slightest she was very nice and actually cared about other people. The news shocked me that it was actually her everyone does dangerous things in their youth it doesn’t take away from who she was

First of all, shame on all of you insensitive pricks for thinking that the circumstances of her death should be shared with all of you strangers. You did not know her at all, nor did you feel the way her family, myself (her little), and her real friends have felt since she passed. You have no right to demand that a mourning family release any information they do not want to release and I’m shocked that we probably belong to the same school, yet your brains are allowing you to think in this way. Second of all, this is a… Read more »

There’s been an alarming number of alcohol/drug-related student deaths at UCSB over the past few years. That’s evidence of a widespread problem that should be addressed, not hidden. If it can happen to someone as bright and talented as Kelly obviously was, then it could happen to anyone. As awful as it is, her death could make someone think twice about taking the drink that pushes them into the danger zone at the next party. I’m very, very sorry for her family and friends.

Hmmmm in light of recent events, I would say that ADP is not enough. How did it help your Big?

Her brother passed away as well before her. How sad. Her poor parents. Can’t even imagine loosing two kids. Was the brother an OD death as well?

She died of Alcohol poisoning. No drugs in tox report. Her brother died of cancer.

Very sad. Seen people in IV arguing over calling 911 while their friend passes old cold from drinking too much. Alcohol is a dangerous drug on its own and will kill you as seen here. Putting your worry over getting a MIP over your friend’s possible death is just disturbing. Agreed that deaths like this from alcohol need more publicity on campus not swept under the rug over fear of tarnishing someones reputation. She was obviously an absolutely wonderful human-being and her manner of death takes nothing from that, just shows it can happen to anyone under the right circumstances.