California Highway Patrol (CHP) responded Wednesday afternoon to a call of a hit and run with major injuries on Pardall and Embarcadero Del Mar. 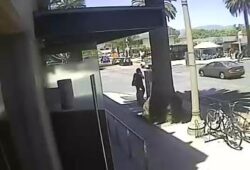 The suspect’s vehicle is on the right side of the image. Photo courtesy of California Highway Patrol.

CHP responded to a call of a hit and run at approximately 1:58 p.m Wednesday.

UC Santa Barbara student Benjamin Shelby suffered a broken femur after falling off of his bicycle when a driver in a dark-colored sedan heading north on Embarcadero Del Mar drove through the intersection without yielding. Shelby braked harshly, falling off of his bicycle and sustaining the injury travelling west on Pardall, California Highway Patrol Spokesman Jonathan Gutierrez said in an email.

The suspect then parked his vehicle to check on Shelby before eventually fleeing north on Embarcadero Del Mar in his car.

Shelby was taken to Goleta Valley Cottage Hospital for his injury.

According to CHP, the suspect drove a dark-colored sedan and was described as a black male wearing a white shirt. There is believed to be no damage on the vehicle as the incident was a non contact felony hit and run.