The Daily Nexus
Science & Tech
The Science Behind Grief and Tragedy
May 25, 2017 at 5:57 pm by Melanie Voskanian

In 2015, Psychological Science published a study conducted by the Columbia University psychology department concerning emotional responses to the shootings that occurred at Sandy Hook Elementary School in Newtown, Conn., in 2012.

The study, which took place shortly after the massacre, collected data over the span of several months on the content of tweets mentioning the Sandy Hook massacre. The study had two goals: The first was to observe whether or not there was a correlation between time and distance from the massacre and frequency of tweets containing words signaling either sadness or anxiety in relation to Sandy Hook. The researchers used only tweets from non-news accounts and attempted to filter out tweets that appeared to be spam.

The second goal was to observe what emotion — sadness or anxiety — was more often evoked by thinking about the specific events of the massacre itself (“concrete details”) versus thinking about the factors that led to it (“abstract causes”). This part of the study involved an experimental scenario with voluntary participants rather than observing events happening in the real world. Participants were randomly chosen to form a few sentences about either the “concrete details” or the “abstract causes” surrounding Sandy Hook and then rated their feelings of sadness and anxiety on a numbered scale.

Researchers found that as time went on, the general frequency of tweets related to the massacre decreased, and the content of the tweets shifted from more sadness-focused to more anxiety-focused. Additionally, as physical distance from Newtown increased, the same shift from sadness to anxiety was observed. They also found that thinking about the “concrete details” caused increased sadness and decreased anxiety in participants; thinking about the more “abstract causes” that led to the shootings produced the opposite result. 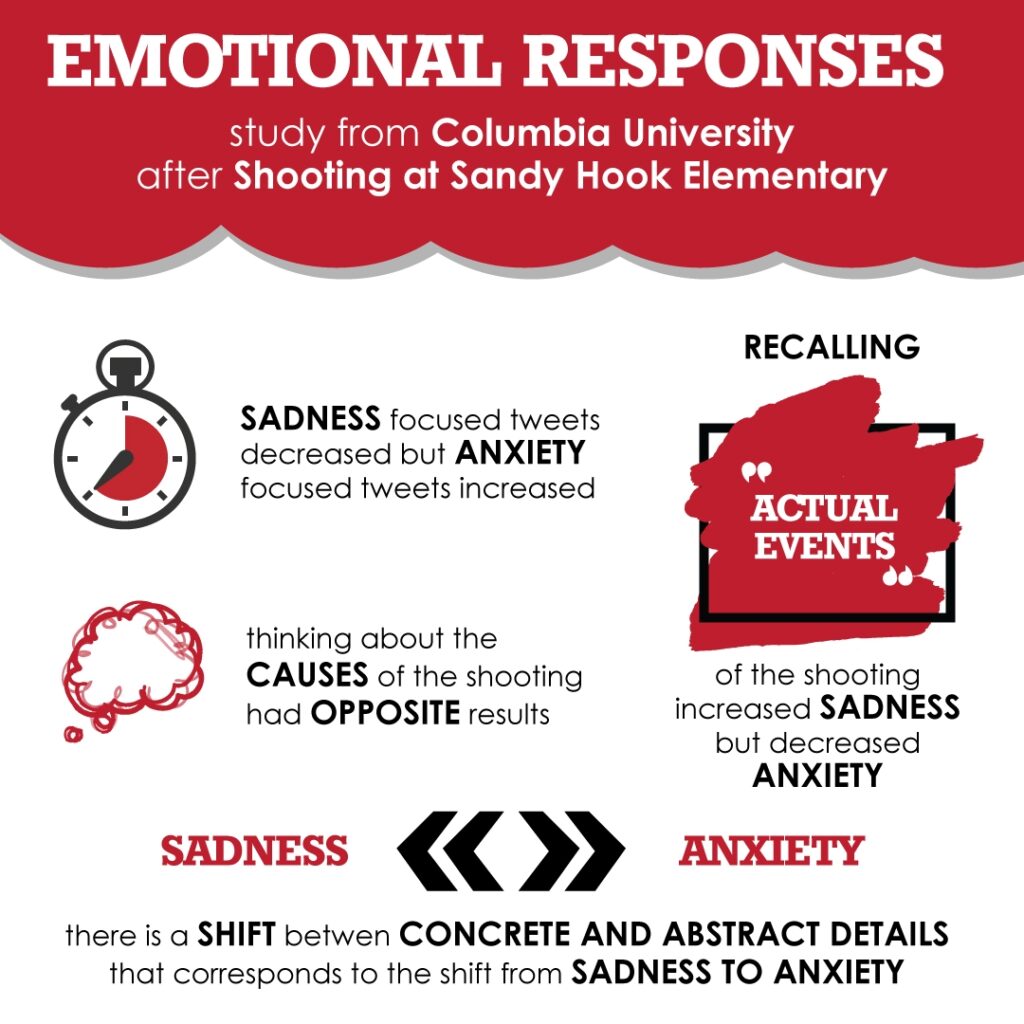 This study and future studies like it could help to develop a better understanding of the most beneficial resources to provide for those coping with a tragedy as time passes.

As the third anniversary of one such tragedy, Isla Vista’s May 23 tragedy, comes to pass and the last class of students here for the tragedy prepares to graduate, a shift is occurring. The new school year will begin with few members of the student body remaining who witnessed the events and their aftermath firsthand. We move from concrete to abstract.

Although the results of the Columbia University study do not confirm any causal relationships between time elapsed since a tragedy and emotional response, the observed correlations are worth taking into consideration. The potential anxiety that could come with no longer having a concrete attachment to the events of May 23, 2014, only adds to the already heavy load of living in a high-stress college environment.

Since not everyone grieves or copes in exactly the same way, not all grief warrants exactly the same treatment. The university offers a variety of resources for students in distress. At Counseling & Psychological Services (C.A.P.S.), registered UCSB students can sign up for group or individual counseling or visit the C.A.P.S. office during drop-in hours for more immediate assistance. Additionally, UCSB Health & Wellness runs multiple programs aimed at reducing and managing stress.

The full text of the original Psychological Science article can be found at ncbi.nlm.nih.gov/pmc/articles/PMC4398595/.

Junk “science”. What do the numbers (on which the conclusions are grounded) mean? Rating scale numbers are, AT BEST, of nominal value. They do not have unambiguous ordinal meaning. Suppose, you rate yourself 3 on a scale and I rate myself 2 (say, for argument, a scale of self-reported happiness). Who is happier? We have no idea. How does my 3 compare with your 2? What are the units (happiness!)? We can’t say. Depends on how one relates numbers (really just marks absent mathematical properties) to one’s phenomenology. Even statistical comparisons are basically content-free. One group rates themselves an average… Read more »