The Daily Nexus
Sports
Work Hard Play Hard: Kayte’s Journey Beyond College Life and Basketball Stardom at UCSB
May 18, 2017 at 5:10 am by Jorge Mercado 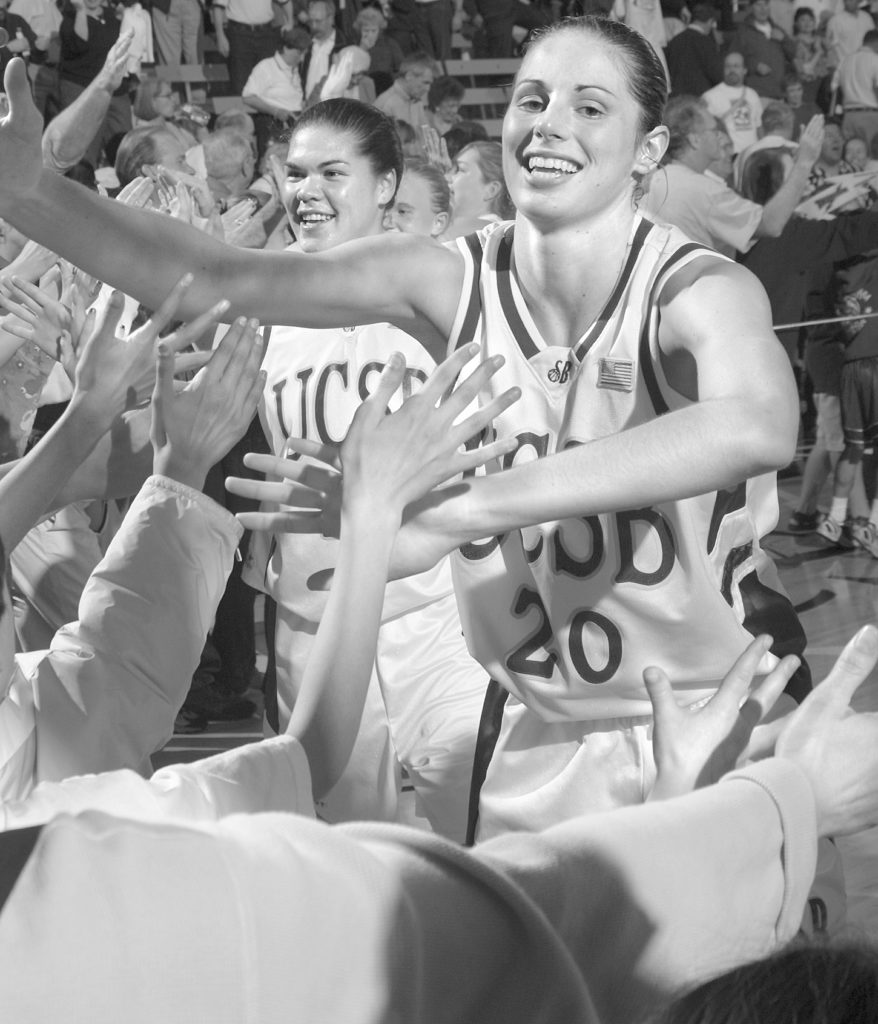 Life after college is something that scares every single one of us students here at UCSB. The random bouts of anxiety that hit us at various moments throughout our day are something we all can relate to. Just like us regular students, most athletes that participate in Division I athletics here at Santa Barbara feel that same pressure.

See, not every athlete has dreams of going pro in their respective sport. Even the few who do have that dream rarely have the opportunity to make it to the professional level coming from such a small D1 program.

Now that’s not to say there isn’t an advantage to being a student athlete here at a school like UCSB. In many cases, there are a bunch of small wins that come with being an athlete, such as being able to pick classes earlier, getting some great gear and most importantly for some, a free education at one of the nation’s top public schools.

But just like in the real world, what you decide to do with your opportunity at a free education is something that will play a factor in what happens down the road in your life.

Kayte Christensen is a perfect example of a woman who has taken every advantage of every opportunity given to her in life, including the sport she played for many years — basketball. During her senior campaign, she averaged 14.5 points per game and grabbed 9.1 rebounds per game leading to her winning the 2002 Big West Player of the Year.

“Mark French was a special coach and the whole coaching staff was great,” Christensen said. “I just think my senior year especially was my favorite year just because of the group of people I was with and the human beings that were here and what we accomplished.”

However, basketball was never really a part of Christensen’s life goals while she was here at UCSB. In fact, the former Gaucho always had dreams of one day living a life away from basketball.

“I wanted to teach classics and be a classics professor. That’s what I studied and that’s where my focus was, and I never thought about playing professionally,” Christensen said. “I didn’t want to play overseas; I played basketball to get an education, and I wanted to continue that path.”

You see, to Christensen, basketball was fun. It wasn’t her life; it wasn’t everything she wanted. To her, she saw it as an opportunity to get what she wanted: an education.

“I knew with five kids in my family that if I wanted a college education I needed to provide it myself and, to me, basketball was always just a tool for that,” Christensen said. “I [am] really fortunate that basketball has shaped everything in my life, and when I look back the one thing that sticks out to me is when you want something you figure out a way to get it and basketball was a tool to get what I wanted and it all worked out.”

When the final buzzer sounded on Christensen’s last game here at UCSB it seemed as though her mind was already made up to not try to play professionally. Like many athletes, her goal was achieved the day she received her degree, not the day she got drafted.

Fortunately, or unfortunately depending how you look at it, basketball wasn’t done with Christensen.

“I remember the coaching staff fighting really hard for me to even get an invite to the combine camp in Chicago, and, unfortunately, that’s one of the things about playing in a small conference … You don’t get a lot of the credit you deserve even though we were a national power here at Santa Barbara all my time here,” Christensen said.

Despite the effort it took just to earn her a chance at the combine, once the Lakeview, Ore. native was seen by scouts, she managed to catch the attention of a few.

“Draft day — I really didn’t know what to expect. I didn’t think I was going to get drafted, and when I did get drafted by Phoenix I didn’t realize that it is really difficult to make a team,” Christensen said.

On the evening of the WNBA’s seventh draft since its inception, Christensen was drafted in the third round as the 40th overall selection by the Phoenix Mercury, and just like that, she had an opportunity of a lifetime fall into her lap, playing in a professional league.

As with everything she had done in her life thus far, the former Big West All-Freshman did what she had done her whole life, work hard. To her credit, she did something not many people of that draft class can say, she made a WNBA roster.

“I remember going through the cut process, and on the last day I went to the practice facility and I asked a veteran, ‘How do we know if we made the final roster?’ and she looked at me and said, ‘You’re here aren’t you?’ and I remember thinking how unceremonious it all was,” Christensen said.

“But then I realized I was one of 12 rookies to actually make a roster, even everyone that was selected in the first round [16 players] didn’t make a team, so that’s when I realized how uncommon it was that I wound up in the WNBA and I was able to play a long time.”

Cut short due to injury, Christensen’s time in the WNBA lasted six years, and after that the UCSB classics graduate now had to search for a new job and pursue a new career, something that did not take long.

“At the end of what would be my last season because of my injury, I went down to L.A. and did an open call with 200 other people for this position for the Kings as a halftime and post-game reporter, and I ended up getting this great job,” Christensen said.

That leads us to the current day, where Christensen will be inducted into the Santa Barbara Basketball Court of Champions sometime later this weekend, an honor that has been bestowed upon some of the best individuals that have come from the city of Santa Barbara, both on and off the court.

“When you look at the names in that group, it’s a real big deal, an honor for sure,” Christensen said. “I think the great thing about the Santa Barbara Court of Champions is that it covers people and things that have made an impact not just in sports, but also in the community and that means a lot to me.”

Christensen is a perfect example of what most of us college students want, a motor that drives us to keep grinding away until we get what we want. Of course, luck comes into play in some stages of life, but overall, what gives us opportunities is the work ethic we show on a day to day basis.

Christensen was like us at one point, a college student who had no idea what she was going to do with the rest of her life. She had ideas, but like what happens with most people, life took over, and she rolled with the punches taking advantage of every single opportunity given to her and it all started with one decision, coming to UCSB.

“I said I have gotten lucky, but I’ve also worked my ass off. This work ethic is something I have carried with me throughout my life and they want people that have that work ethic around them,” Christensen said.

“I made a very pure decision to go to Santa Barbara. Every Pac-10 [now Pac-12] school except Stanford recruited me, but I chose Santa Barbara from the Big West. I didn’t know it was a big deal, but I made it because I felt like it was a place people would care about me and what I would be in my life.”

Whether you are a senior about to graduate or a freshman just finishing up your first year as a full-time student, do not panic. The same applies for student-athletes concerned with finding their niche outside the sport they’ve played for the majority of their lives.

As students, we must keep in mind that being a student doesn’t define our future, but rather it is the next step toward discovering our purpose, which has no definite pathway. Work hard, and stay humble, just like our favorite forward from the years 1998-2002, Kayte Christensen.