The Daily Nexus
Fine Arts
Syrian DJ Omar Souleyman Brings Beats to UCSB
May 18, 2017 at 5:11 am by Marisa Ratchford 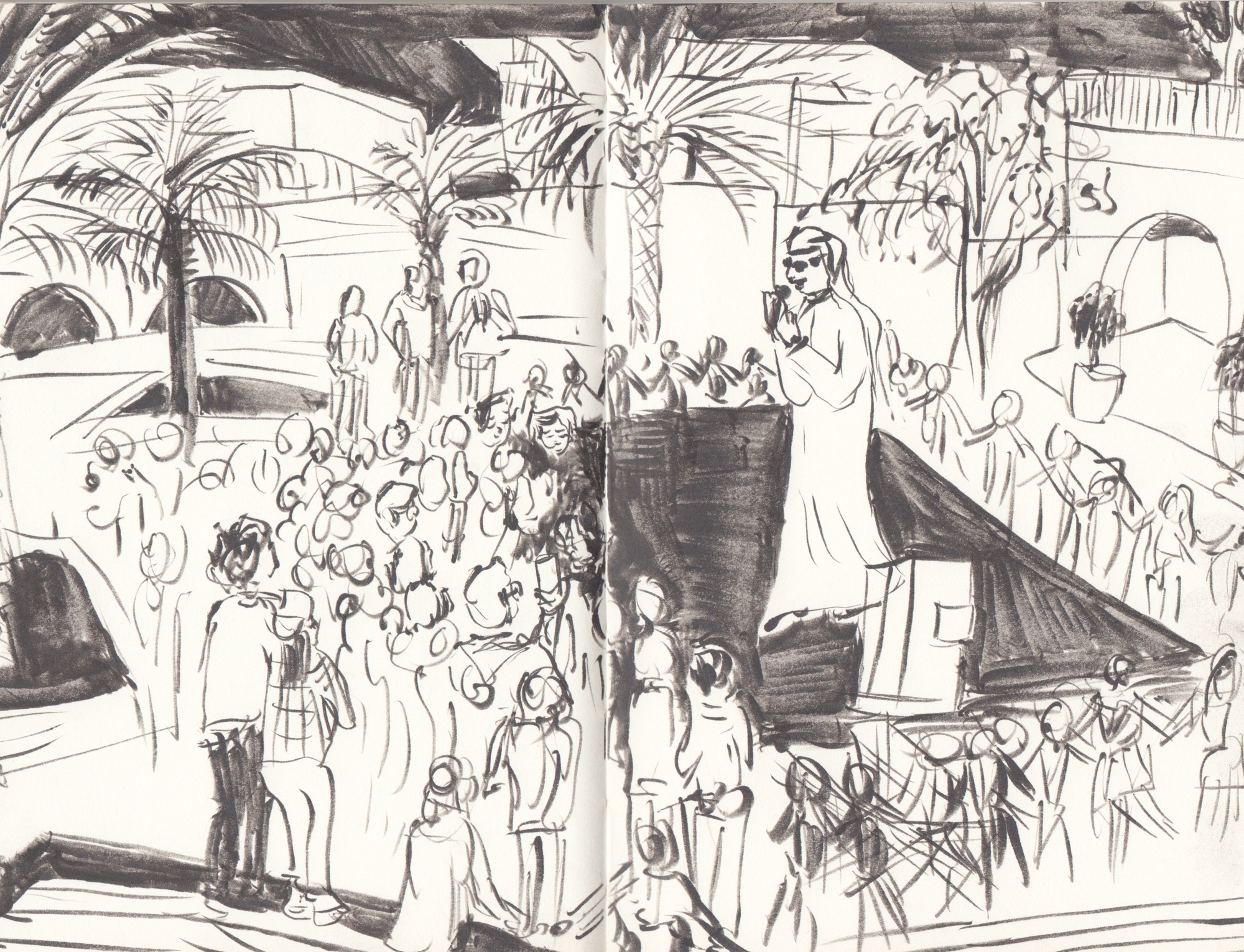 After rushing out of work, driving over the desired speed limit according to my grandpa or a local police officer and paying my university a mandatory $4 parking fee for the free concert I was attending, I sat down on the concrete steps of Storke Plaza for what would turn out to be an eventful night that I had not prepared for.

The outdoor concert was hosted by KCSB on Monday, with Omar Souleyman as the headliner and the UCSB Middle East Ensemble opening the show. Both captured the past and present sounds of the Middle East in an event that gathered the young and the old, students and community members and experienced and inexperienced listeners of the hypnotic rhythms that the regional music is known for.

The event featured lots of additional booths to check out along the sidelines of the main stage. Student cultural groups such as the Lebanese Club, the Arab Student Group and the Persian Student Group were in attendance to promote their organizations. Food was provided by local favorite Nimita’s Cuisine, who appears at multiple events in and around SB yearly. And, of course, there was a merch table promoting both KCSB and Souleyman’s swag along with the opportunity to donate to Souleyman’s promoted charity for the aid of his homeland Syria, “Our Hearts Ache for Syria, ” which works closely with Doctors Without Borders to aid the war-torn country.

The Plaza was lively with anticipation as the audience waited for the concert to begin. Typical to their character, the Middle East Ensemble kept us all waiting while they perfected their final checkups. This didn’t bother the audience, though; they talked amongst themselves as they sat cross-legged on the floor, while small children ran around playing tag or rode on scooters.

The concert was set to start at 6:30 p.m. but realistically did not begin until 7. The ensemble, about half the size of their normal group, took to the stage. Director Scott Marcus was sitting center stage as the choir members, oud players, flutists and drum section fanned out along his sides. The drum director, Susan Rudnicki, sat down and vigorously warmed up her hands before the show began. As Marcus began to announce the opening of the show, Storke Tower ceremoniously rang to initiate its beginning.

The Middle East Ensemble typically highlights many regional music styles, but, in honor of Souleyman, they focused a bit more on the musical selections of Syria, specifically songs from the revered Aleppo-based singer Sabah Fakhri. Their performance, as per usual, captured the imagination of the audience. They fed off each other’s energy, and the atmosphere was reminiscent of a campfire sing-along with just the right amount of sensational talent and lively ad-libbing. Many of their numbers were accompanied by dancers who dressed in sultry and shimmery costumes to grab the attention of the passersby.

The ensemble showed great technical skill, as everyone was participating with one unit seamlessly creating a rhythmic showcase to accompany the talented solo singers and instrumentalists as they demonstrated their technique. Even when a member arrived late, he jumped up on stage and began playing the drum so effortlessly I would assume he could produce those beats in his sleep.

Aside from the singers who demonstrated such emotion and capability in their voices, another standout solo came from Ziad Marcus, the director’s son, who performed a hypnotic drum solo that had the audience silently captivated as he manipulated the pacing, pitch and style of the drum all within a few beats. His fingers seemed to vibrate across the drum surface with ease. Although his face was concentrated and stoic, he seemed to produce these sounds without any strain. It was truly a virtuoso performance.

Toward the end of the opening act, the shadow of Storke Tower began to cast a chill over the audience. Being a food editor, I wasn’t going to not sample the culinary aspects of the event.

Nimita’s Cuisine, although having to deal with technical issues like a fryer that kept losing power, provided a delicious and cost-effective menu sampling Indian cuisine staples like naan, samosas and biryani. My biryani was delicious and paired with a cream sauce on the side that brought all the flavors together really well. I happened to arrive at the tent at exactly the time the shit hit the fan for the duo running the booth, so my naan took some time to get out to me. However, when I received it, it was warm and served with an acidic, green dipping sauce. I used the bread’s warmth to keep me from freezing as the sun had officially gone down, the KCSB team was setting up for Souleyman and the sea breeze was turning the night cold.

After what seemed like an eternity, the crew had finally perfected their sound equipment and the show could continue. Souleyman’s keyboardist and entourage took their places. The keyboardist wore an unassuming look of a hoodie and jeans; I almost mistook him for one of the KCSB sound crew until his fingers started producing a magical cacophony of sound that both confused and excited me. Before I could process it, shouting began in the audience as Souleyman himself, dressed in a traditional dishdashah and ghutrah and wearing sunglasses at 9 p.m., appeared on stage. And just like that, it was off. The concert had no introduction; frankly, it didn’t need one. It dove straight into the powerful combination of Middle Eastern rhythms, techno and hip hop that melded to create a new and modern style unique to Souleyman and appreciated by what seemed like everyone.

Although I didn’t understand the words, the infectious beat had me dancing and bobbing my head with as much excitement as my body could physically muster after a nine-hour work day. The rest of the crowd was just as enthralled as I was and only a few minutes in, the concert had turned into a huge dance party, which included Middle East folk dancing that involves holding hands, repeated footwork patterns and circling.

Each song seemed to go on forever, and the repetitive nature hypnotized the audience, as they grew more enthusiastic with their dance moves at the start of each verse.

The strobing, colored lights bounced off the palm trees in the plaza, and as I looked around, I saw people from all walks of life, backgrounds, ethnicities, religion and age dancing together under the infectious beat of Souleyman and his keyboardist. In that moment, I had hope for positive change for the future.