Sexual assault reporting and rape cases in I.V. have been increasing throughout the past four years.

It is unknown what exactly has prompted the increase, but the issue has been at the center of Associated Students’ elections platforms and the recent sexual assault sit-in on May 3 and 4 in Cheadle Hall.

Hoover said that, as of March, three forcible rape crimes have occurred.

Hoover said 74 percent of the 48 sexual assaults occurred on the weekends between 9 p.m. Friday and 11 p.m. Sunday. Approximately 74 percent of the cases also involved alcohol and/or drug consumption, alcohol being the most widely used substance, Hoover said.

The university Title IX office, Santa Barbara Rape Crisis Center and SBSO could not give specific measures to explain why reporting has increased.

I.V. Community Services District (CSD) board chair Ethan Bertrand said the increase in sexual assault reporting could be one of two reasons: more people are coming forward to report or more sexual assaults are happening.

Bertrand said he wants the CSD to “fill in the gaps” that exist within the policing and safety of I.V.

Hoover also gave an analysis of the increasing sexual assault reports in I.V.

“On the one hand, the reason for the increase in reported rapes and sexual assaults could be the result of more awareness regarding these crimes and victims feeling comfortable coming forward to report the incident,” she said.

Counseling and Psychological Services (C.A.P.S.) has created resources for students that are survivors of sexual assault and rape. Jeanne Stanford, the director of C.A.P.S. who has been working with sexual assault survivors since 1990, said there were only nine psychologists in 2005 when she first started. They now have 21.

Despite increasing resources, student activists and assault survivors were left confused over who has jurisdiction over crimes in Isla Vista after the May 3 and 4 sit-in.

The sit-in was a continuation of the 2015 sit-in that set out a list of demands eventually signed off by UC Santa Barbara administration.

Chancellor Henry T. Yang also signed off on this year’s demands, which included creating a sexual assault survivor resource center and paying in full the tuition debt of Ro’Shawndra Earvin, one of the sit-in’s organizers.

The sit-in eventually progressed into a town hall on Wednesday in the Humanities and Social Sciences Building where public officials, administration representatives, students, sexual assault survivors and activists were present to discuss the list of demands and public involvement in the process of realizing each demand. 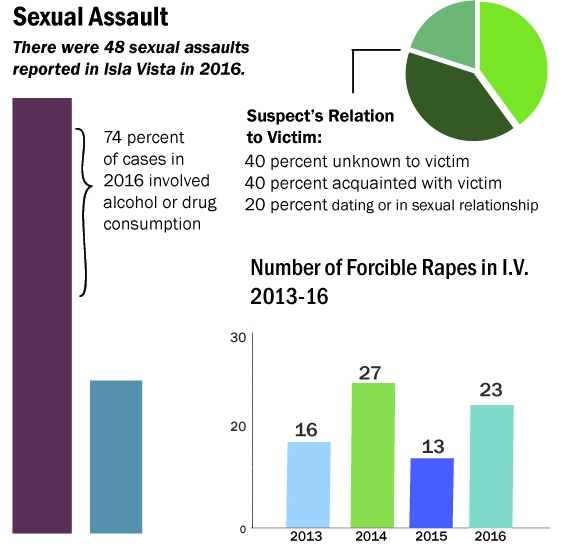 Earvin has publicly expressed her frustration with jurisdiction matters over her sexual assault case, insisting that the university mishandled her case.

Earvin told the Nexus she wanted to report her rape to the proper authorities who are supposed to make sure she is “protected and that justice is served.”
Earvin also said she felt her sexual assault case was not handled the same way that “a member of a society who pays for those services” should.

In response to the confusion of who has jurisdiction over crimes in I.V., Hoover said, “Regardless of who takes the report, a Sheriff’s deputy or UC Santa Barbara police officer, the report is taken seriously and will be assigned to the appropriate agency for the investigation.”

Hoover said that when it comes to reporting a sexual assault crime the victim will not be left in a “jurisdictional limbo.”

UCSB spokesperson Andrea Estrada said the university cannot discuss the details of any specific case, but “the emotional and physical well-being of sexual assault survivors is of paramount importance” to the university.

“With the utmost sensitivity and care, the university considers each case individually and expeditiously to determine the best and most appropriate way to assist a survivor in the aftermath of such physical violence,” she said in a statement.

48 sexual assaults were reported in Isla Vista in 2016? That doesn’t add up. I thought that 1 in 4 or 1 in 5 women were raped in college (as official UCSB school materials claim). If that were the case, there would several hundred rapes in Isla Vista every year. Of course sexual assault is an underreported crime, but to that degree? Either only a few percentage of rape victims report, or the school is lying to us.

You shouldn’t feel so comfortable being so publicly dense like this. It’s pretty embarrassing and only serves to highlight your supidity and ignorance.