The Daily Nexus
Tennis
Season Review: UCSB Women’s Tennis Repeats as Big West Champs
May 18, 2017 at 5:00 am by Andrew Hernandez

The remarkable run of the UCSB’s women’s tennis team officially has come to an end, leaving behind another successful season for the Gauchos. They finished at 17-10 and 7-1 in Big West play prior to enduring a disappointing, early first-round exit in the NCAA Tournament.

Santa Barbara’s season began with it looking to reach the same heights as the year before and seeking to repeat as Big West champions for the first time in program history. Following the achievements of winning its first Big West title since 1996 and first-ever NCAA Tournament victory last season, the amount of pressure was greater coming into this season.

The added pressure certainly made the team feel that it not only could reach the successful heights of decades prior but that this was expected of them.

The team was able to hover around .500 at the midway point through the season, which allowed it to keep pace with the rest of its conference competition, as the Gauchos hoped to remain near the top of the standings in case they could make a surge for the top.

UCSB took it upon itself to have its hopes fulfilled as the turning point of its season came in the month of April. The team had entered the last full month of the season with a 7-9 record. 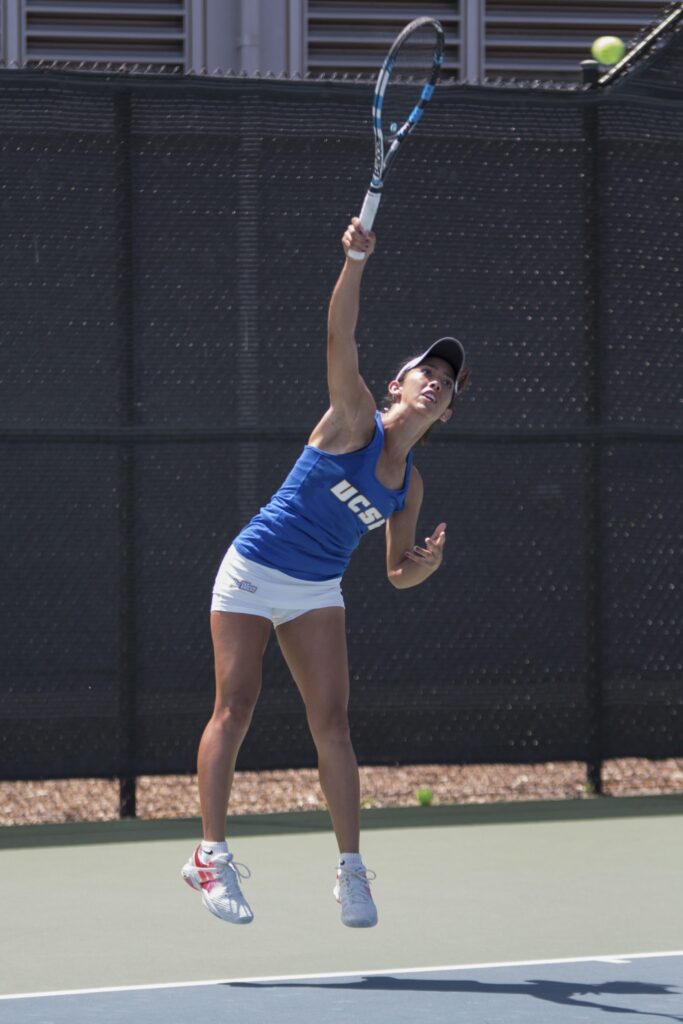 The Gauchos kicked off April playing a Sunday doubleheader, during which the team beat Cal State Northridge 4-1 and Loyola Marymount University 4-0. Santa Barbara then went on a tear through the Big West Conference, stringing together wins against opponents like Cal State Fullerton, Long Beach State and Cal Poly. Of the seven regular-season conference games they played in April, the Gauchos swept their opponents 4-0 a total of four times.

The impressive run of seven-straight victories carried Santa Barbara to the No. 2 seed in the Big West Conference Tournament, while three more wins to extend its streak to 10 matches led to an eventual return to the Big West Championships, during which the team played Hawaii.

Hawaii was responsible for the Gauchos’ sole blemish in their conference record, and the matchup between the two teams was extremely competitive. However, it was UCSB who was able to answer back against the Rainbow Wahine by winning the conference final match 4-1. The finish at the top of the Big West Conference punched the team’s ticket to the first round of the NCAA Tournament.

Results of the NCAA selection chose UCSB to face the No. 47 UCLA Bruins. The Bruins were a familiar opponent for the Gauchos, who had played them during their non-conference schedule. The Bruins were able to win that match 4-0, clinching the doubles point and leaving three singles matches unfinished.

The first-round meet between the two teams began with doubles play against the talented Bruin duo of freshman Ena Shibahara and junior Kristin Wiley. UCLA captured the doubles point after a loss by UCSB tandem junior Amanda Atanasson and senior Melissa Baker.

In singles play, junior Palina Dubavets and senior Stefani Stojic tried to give the Gauchos an early leg up on the Bruins, but the play of No. 5 Shibahara and sophomore Alaina Miller was too much for the Gauchos’ standouts. Junior Terri Fleming clinched the meet for the Bruins after defeating Natalie Da Silveira. Yet again, it was the Bruins winning the match 4-0, clinching the doubles point and leaving three singles matches unfinished.

Despite the early exit for the Gauchos, the team is still poised to be a contender in both the Big West and the NCAA Tournament.

The key players the Gauchos will be losing after this season are seniors Melissa Baker, Jaimee Gilbertson and Stefani Stojic. All three of these players were crucial to both UCSB Big West Championship titles and were key players in getting the team out of its regular-season slump this year.

The Gauchos end this season with a variety of accolades. The team has captured the first back-to-back conference titles since 1995 and 1996, which signaled the end years of UCSB’s six-straight Big West titles from 1991-96. The consecutive NCAA Tournament appearances were also the program’s first since then.

It certainly was an exciting season to follow, as the women’s tennis program is taking steps toward returning to its glory of being one of the top-tier Big West teams.