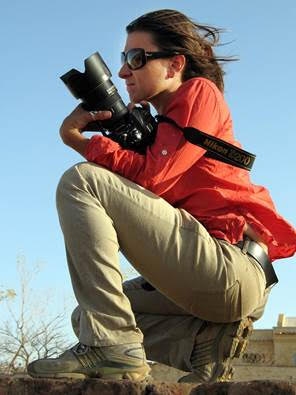 Addario is a freelance journalist who documents conflicts and humanitarian crises for National Geographic, Time magazine, and The New York Times. Addario’s memoir, “It’s What I Do: A Photographer’s Life of Love and War,” is currently being adapted into a film. The film will be directed by Steven Spielberg and will star Oscar-winning actress Jennifer Lawrence.

Addario took to the stage assuming the role of storyteller. As she spoke she displayed her photographs and told the stories behind them, in the process transforming the audience into captivated and often horrified listeners.

Addario began by explaining why she decided to cover war, jokingly attributing the desire to her childhood growing up the youngest of four sisters.

“That was probably the best war training ever,” she said.

Addario started covering human rights during her first visit to Afghanistan. She said that, at the time, her knowledge of the country was limited to a few New York Times articles that spoke of female oppression under Taliban rule.

“I was curious. Was that the reality or was that our western views imposed on them?” she said.

When she arrived in Afghanistan, she said she realized her gender could open new doors. Addario then displayed a photograph she took of a town seen through small holes in a heavy, obscuring cloth.

“This is the view from underneath a burqa,” Addario said. 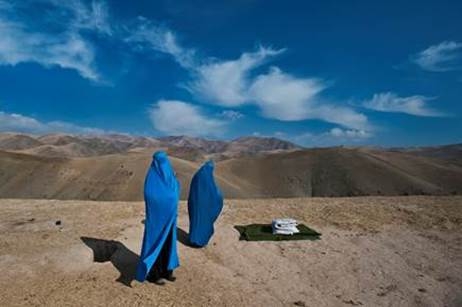 After the Sept. 11, 2001, terrorist attack in New York City, Addario asked The New York Times if she could cover the war in Iraq despite having no prior experience covering combat.

Addario witnessed and documented the fall of Saddam Hussein and the Taliban and the ensuing aftermath that followed. In 2003, when the insurgency started, Addario asked if she could embed with the military for the first time.

After being granted permission, she went into the heart of the insurgency in the Sunni triangle where she said she was not censored in her photography and reporting.

“As a journalist, one of the great privileges is being able to actually cover many different sides of the story,” she said. “That is now changing as the security situation for journalists’ overseas changes.”

When Addario heard Sudanese president Omar al-Bashir publicly claim that no government soldiers had been killed in a rebel conflict, Addario took it upon herself as a journalist to dispel those lies. She located the group of rebels and requested to be taken across the border and be shown the site where the conflict occurred.

Addario displayed a photograph she took and said, “When we got to the site, there were bodies clear across the desert completely negating what President Bashir had said.” The photo was later issued in The New York Times, and she said it symbolizes “the fact that if you have proof, no one can lie.”

In order to capture what otherwise would go untold, Addario has gone on various military operations, jumped out of Black Hawk military aircraft, gotten stuck in crossfires, met with the Taliban, endured military airstrikes and been listed among Newsweek’s 150 Fearless Women.

Addario was one of the four New York Times journalists reported to have gone missing in Libya in 2011.

Addario described the moment of her capture: “I was grabbed by one of Ghadafi’s troops. He stated pulling at my camera, and I very stupidly and instinctually was standing there pulling back as bullets whizzed past me.”

Explaining her access and entry into such perilous situations, Addario said, “Journalists can go wherever they’re crazy enough to go and wherever the military will allow them.” 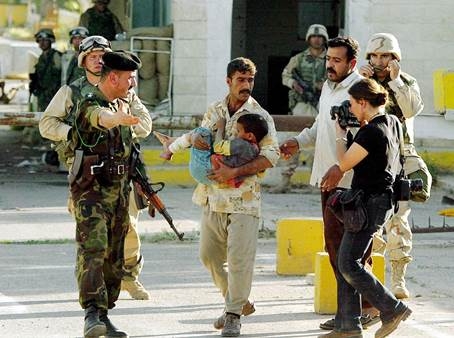 After her Libyan capture, Addario promised her family that she wouldn’t go back to Syria, at least for some time. For the last five years, she has been covering the Syrian refugee crisis.

Addario displayed a photograph she captured of Syrian refugees streaming into northern Iraq.

“This is especially poignant for me because 10 years before, I had been in Iraq and photographing Iraqis streaming into Syria,” she said.

Addario, who now has a young son, has been covering less breaking news lately, taking on more long-term stories rather than frontline conflicts.

“I have to stay alive, which wasn’t much of an issue before,” she said. “I know you all think I’m crazy.”