The Daily Nexus
Sports
Gauchos Win Final Series of Regular Season Against Conference Champ Fullerton
May 14, 2017 at 5:51 am by Calvin Thrift 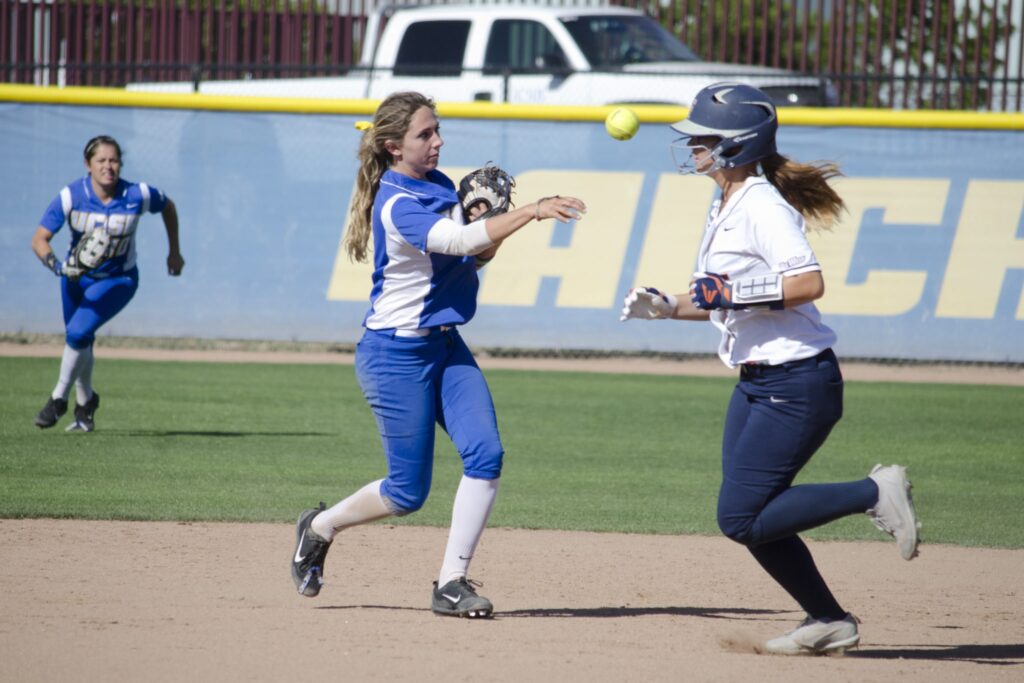 The UCSB softball team finished its season this weekend with a competitive series at home against Big West powerhouse Cal State Fullerton in which the Gauchos closed out the year on a high note, winning the series two games to one.

After winning Friday’s game 4-3, the Gauchos fell in the first game of Saturday’s doubleheader by one run, 6-5. With the series tied 1-1, Santa Barbara bounced back to win the pivotal Game 3 of the series 2-0, shutting out Fullerton.

With the conclusion of this series, the Gauchos cap their season off with a 31-26 winning record overall and an 11-10 record in conference games. The Titans ended their regular season with a strong 33-21 overall record to go with their league-best 16-5 conference record. With this record, Cal State Fullerton is the Big West Conference Champion this season while Santa Barbara is in a three-way tie for second along with CSUN and Long Beach.

In Game 1 on Friday, UCSB trailed 3-0 through much of the game until junior outfielder Jessica Johnston hit a clutch grand slam in the bottom of the sixth to give the Gauchos the victory 4-3.

After one scoreless inning for both teams, Fullerton took the offensive initiative in the top of the second inning. Sophomore Gaucho pitcher Veronika Gulvin had to deal with a one-shot homer from junior infielder Shianne Brannan, then two unearned runs before closing out the inning.

In the bottom of the sixth, still down by three runs, the Gauchos started making moves when they got the bases loaded. With Johnston up at bat, it seemed possible for Santa Barbara to get on the board, but Johnston exceeded expectations by getting the Gauchos a 4-3 lead off an incredible grand slam.

Despite recording three errors on the day, the Gauchos held on to pull off the victory 4-3, not allowing Fullerton to answer back in the top of the seventh inning.

After Friday’s win, Santa Barbara went on to lose the second game of the series on Saturday, falling to Fullerton 6-5.

The Gauchos struggled defensively in the game, making four errors just in the first four innings. Fullerton was first to strike again, scoring two runs thanks to an error made at second in the top of the third inning.

With eight hits on the day, the Titans saw a lot of time on base, and, luckily for them, they transferred those hits into runs.

Still in the top of the third, a foul out by freshman first-baseman Zoe Richard led to an unearned run for Fullerton. Then, an illegal pitch by the Gauchos extended the Titan lead by 4-0 with yet another unearned run.

While also notching eight hits on the day, the Gauchos struggled to convert their hits into runs.

In the top of the fourth, junior outfielder Samantha Vandiver’s double to center brought in two more unearned runs, making the score 6-0 heading into the bottom of the fourth, during which the Gauchos again failed to score.

While quiet up to this point, the Gauchos stomped back in the bottom of the seventh, starting with senior infielder Emily Brucelas hitting a single to shortstop, bringing in freshman infielder Alyssa Diaz for the RBI and moving senior outfielder Stacy Cavazos to second base. On the board with a run, UCSB started catching fire. Cavazos scored off of a throwing error made by the Titans, and then Brucelas reached home for an unearned run off another throwing error.

Despite their efforts, the comeback was cut short for the Gauchos as they fell 6-5.

In the second game on Saturday and the final game of the series, Santa Barbara junior pitcher Lena Mayer shut out the Titans, only allowing four hits.

Fullerton had quite a different game than Game 2, as they struggled against Mayer and failed to score at all.

Santa Barbara, on the other hand, was able to finally score in the bottom of the sixth after struggling in the first five innings. In what involved a trio of UCSB’s best this season, Clark reached home, and Johnston reached second off of Diaz’s single up the middle. Then, sophomore infielder Melanie Menor hit a single up the middle of her own, bringing in Johnston for the score and game lead of 2-0.

It looked as if the Titans may make an effort at getting on the board in the seventh, as they had two runners on base with only one out. However, Mayer came up big with two straight strikeouts to end the game and series. Mayer shut out the Titans for the first time in their last 18 performances.

Although the Gauchos fell in some games this season, their effort and hard work kept them close all year as they worked to improve upon last season and set another solid foundation for a successful season next year.

In their final game at Campus Diamond, seniors Clark, Brucelas, senior outfielder Jacqueline Hinojosa and Cavazos were honored before Game 2, but they aren’t done yet as the Gauchos will participate in the inaugural NISC postseason Tournament which is set to begin Tuesday.