The Daily Nexus
Science & Tech
Physicist Measures Small-Scale Fluctuations in Cosmic Web
May 11, 2017 at 6:05 am by Kevin Flores

Furthering our understanding of the universe around us has been a goal for many astronomers and cosmologists across centuries. In recent years, some great strides have been made toward this goal, with some of the most groundbreaking findings being made by scientists right here on campus.

Most scientists in these fields of study agree that the vast majority of intergalactic space is comprised of dark matter and energy. In the farthest reaches of outer space, only a single atom of hydrogen occupies a cubic meter of space. When viewed from a larger scale, these atoms align to form what are known as “filaments,” which further arrange themselves to comprise the “cosmic web” that spans billions of light years.

Joseph Hennawi, an associate professor in the Department of Physics at UCSB, along with a team of researchers, has managed to measure small-scale fluctuations in the cosmic web, a feat unprecedented in the field due to the lack of accurate forms of measurement for such minute patterns in the density of the matter that comprises the cosmic web.

What’s notable about Hennawi’s work is that he and his team were able to identify a pair of quasars in close proximity to one another, a very rare event. With this tool in hand, the researchers were able to examine the cosmic web at a much smaller scale than had previously been possible.

“The quasar is like a background light source; it’s very bright. These objects are hyperluminous because they are active, supermassive black holes that are being fed by matter around them,” Hennawi said. “Because we can observe their light travelling through the intergalactic medium, that allows us to characterize the distribution of matter in the cosmic web.” 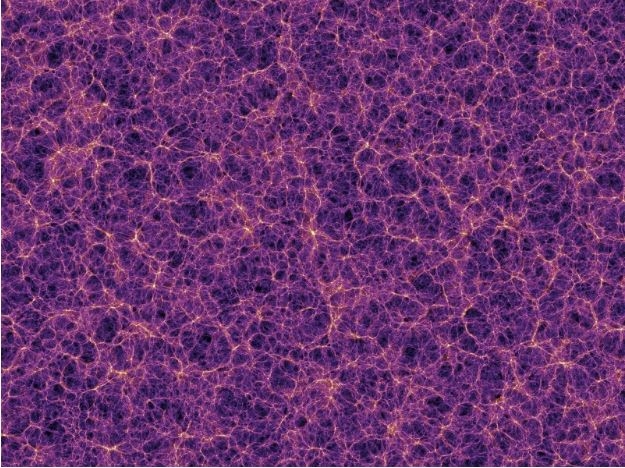 The above photo is the result of a digital simulation showing the large-scale distribution of matter, with filaments and knots. Matter known as ordinary, which makes up everything we know, corresponds to only 5 percent of the universe. Approximately half of this percentage has still eluded detection. / Courtesy of the Max-Planck Institut für Astrophysik

As light from the quasar pair travels toward earth, it interacts with matter that lies among the interconnected filaments that make up the cosmic web. Thus, by measuring the changes in density of matter, scientists are able to broaden their understanding of the material that makes up the vast majority of intergalactic space and how it behaves.

“They’re rare objects usually separated by very large distances. If you happen to find one, the probability of finding another one close by is very low,” Hennawi said about the quasar pairs. “We figured out a way to mine through massive amounts of data and actually find cases where two quasars are next to each other. This allowed us to study how the web differed between the two.”

While this previous single-quasar technique provided researchers with a very two-dimensional idea of what the cosmic web was like, this novel technique of utilizing the rare double-quasar has added a third dimension and in turn helped scientists understand a little more about how the cosmic web behaves.

“The novelty of the observations is that the pair allowed us to measure the structure of the web on very small scales,” Hennawi said. “Before, we had characterized the web using an individual quasar technique, but we didn’t understand what the web was like on smaller scales.”

In the past, it had been impossible to translate measurements made at vast scales the size of the cosmic web itself down to scales the size of at least a galaxy. At this much smaller scale, it is easier for researchers to reach a conclusion and make predictions about the activity of the cosmic web. Now that Hennawi and his team have managed to achieve this, they are able to make much more minute observations.

The next feature that Hennawi and his team hope to explore are the phase transitions of the gas that occupies the cosmic web. Over billions of years, this gas has gone from its basal, unionized state to an excited, ionized phase of gas that is caused by its interaction with light and energy from nearby luminous objects.

Hennawi and his team’s findings, recently published in Science, provide a number of opportunities for further research and exploration. Along with measuring small fluctuations in the cosmic web at scales never before probed, this new research allows scientists to expand their knowledge and understanding of this incredible, intergalactic phenomenon.