The Daily Nexus
Events
Master Storyteller David Sedaris Returns to SB
May 11, 2017 at 5:58 am by Ivan Gonzalez

After borrowing a friend’s car, I made the journey from UCSB to the Arlington Theatre excited and in high spirits. After arriving at downtown Santa Barbara, I realized I had forgotten my wallet. I drove aimlessly in search of free parking and cautiously in the presence of police. Since I was a little tense after navigating around the streets, I tried to ease up by telling myself this sort of situational mishap was in the spirit of David Sedaris. Finally, I made it to the Arlington, completely in awe of the mission-style red tile and fountain courtyard. Returning fans and new listeners, including myself, all entered the faux open-aired theater with the same hopes: a memorable, sidesplitting, “Oh my God!”-filled, storytelling evening with David Sedaris.

UCSB Arts & Lectures can’t seem to get enough of David Sedaris, and it’s very apparent why. For nearly a decade now, the best-selling author has returned annually to the Arlington, delivering his smart and equally crude humor and social commentary. Sedaris’s positively reviewed essay collections, Let’s Explore Diabetes with Owls, Naked and Me Talk Pretty One Day, and his breakthrough NPR-broadcast “Santaland Diaries” have garnered him a large following. In his autobiographical essays, he recounts outlandish childhood experiences, his family and culture, life as a gay man and other personal stories, all with self-deprecating and humorous tones.

The evening started with a welcome to the audience and a promotion of Sedaris’s upcoming book, Theft by Finding. The emcee also encouraged the audience to stay after the show to partake in a Q&A, followed by a book signing. They also introduced the night’s ASL translator, Amy Mass, who experienced Sedaris fans knew would be a wonderful addition. Finally, the man of the night came on stage, and the crowd cheered, and excitedly awaiting the humor Sedaris would cook up with today’s current events.

In his typical fashion, Sedaris walked onto the stage wearing a suit, jacket and shorts stitched together out of other shorts, which he claimed he picked up in Tokyo. Right from the start, he began his talk with Trump jokes. He then asked the ASL translator, Amy, to show the audience what the sign for Trump was. She then began to sign what seemed to be an imitation of a toupee waving in the wind. The audience roared with laughter, making apparent whom the crowd had voted for this past election and setting the tone for a no-holds-barred night.

His first act of the night was titled “10 Reasons I’ve Been Depressed Lately.” Most of the reasons revolved around his experiences before and after the presidential elections. Some of the crowd’s favorites include his descriptions of his bleak feelings of despair and uncertainty with the post-election results and his solace in knowing that somewhere in the world, Cher was feeling the same way. He believed that if Cher, whom he’s never met, could get through this feeling, he could too. His 10th reason was that he jokingly replied to an email from a longtime friend regarding her disappointed feelings about the election in a pro-Trump fashion, and before he could reply with “Just kidding,” he had been blocked. I, myself, am not a very outwardly expressive individual, but the women sitting next to me vocalized all my internalized feelings with her distinctive laugh.

His jokes were all received positively by the assumingly liberal Santa Barbara crowd. If he were to present the jokes somewhere in the more predominantly republican region of the United States, you can only imagine the outcry by the crow, as his rhetoric did include heavy generalizations and negative stereotypes of Trump and his supporters. But alas, here in California where the crowd favors the likes of Trevor Noah and Stephen Colbert, he was welcomed. 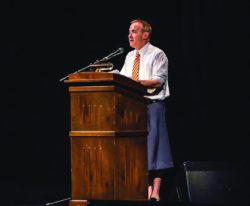 His ability to transition stories almost seamlessly into others is praiseworthy. I was imagining myself along the shores of his family home on Emerald Isle bantering with his Trump-voting father, and before I knew it, we were transported to a Hawaiian Airbnb home, where he began describing his reaction to watching an alcoholic defecating on top of his car on the show “Intervention.” He then brought it back full circle to his family, through a story of his mom’s alcoholic antics. Underneath his entertaining storytelling, he wove in underlying messages, like how although he could be embarrassed by his mother’s alcoholic tendencies, he does his best to understand and support her the same way she supported his imperfect self throughout his whole life. I realized then why his storytelling is so unique — I was able to draw connections to my own family and discovered that although Sedaris and I have very different backgrounds, we shared similar silver linings in our dysfunctional family dynamics.

He wrapped up the night with readings from his diary that he’s kept his whole life, which will be published in his upcoming book. My favorite was about an 11-year-old child who came up to him and asked him “What do you want on a pizza, but not on a pussy?” to which he said, “Uh, hot melting cheese? Mushrooms? Pineapple?” The child then responded, “Crust!” The show wrapped up on a high note, as the audience pondered whether their daily life was as zany as David Sedaris’s journal entries.

To my surprise, when the post-show Q&A began, the politically armed Sedaris did not receive many politically loaded questions. Rather, the audience asked him what other shows he liked to watch, how he wrote out his jokes and other basic questions. From the corner of my eye, I saw some die-hard Sedaris fans slyly leave their seats to get a good spot in the book-signing line that would eventually fill the lobby and extend up into the staircase.

The audience eventually flowed out the theater en masse, some grinning, some reciting their favorite jokes and others commenting their thoughts to their friends. Overall, no one left dissatisfied. The ever-so-charming State Street was lit up with smiles of Sedaris fans old and new — equally as bright as the lights lining the Mission Revival-style streets.