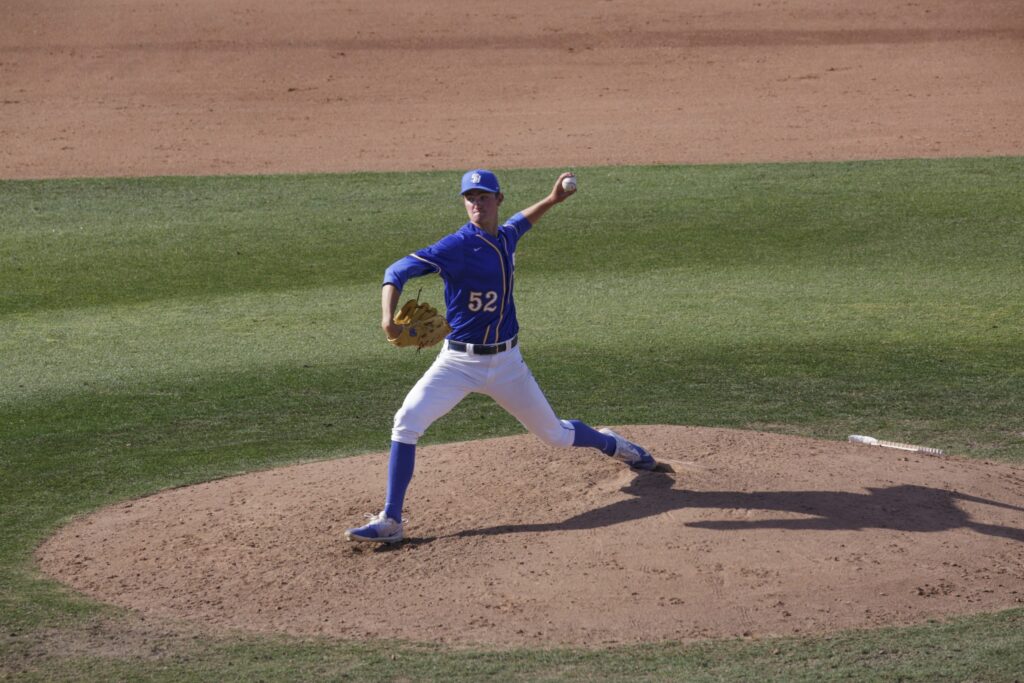 Mark this one on your calendars folks; the most highly anticipated game of the season has arrived. The UCSB baseball team, which currently sits at 20-25, will be heading to Cal State Fullerton to face the No. 15 nationally ranked Titans, who are 29-16.

Games 1 and 2 of the three-game series will be aired on national television, with ESPNU providing coverage on the opening game and FOX Sports Prime Ticket for the second matchup. Game 3, which begins Sunday at 1 p.m., has yet to have any scheduled TV broadcasting. Some may wonder why there’s so much hype surrounding the upcoming series considering the fact that the Gauchos don’t have much to play for; however, there are a few reasons why one should pay attention to the slate of games.

1) The Gauchos will be playing inspired baseball.

You can bet your bottom dollar that UCSB is sick and tired of hearing about how amazing Cal State Fullerton has been all season long. After coming off a College World Series campaign, the pain of another school within your own conference potentially being able to experience the same thing you did last year is a deep one, especially if you’re one of the returners. To compensate, the Gauchos will be fired up while going into enemy territory to take on the No. 15 team in the country.

2) UCSB Baseball has a lot of pride on the line.

Head Coach Andrew Checketts and his coaching staff will not be playing around with their lineup during this series as we have seen lately. Expect to see a lineup similar to what we have seen all year long. Guys on the DL, such as junior second baseman Colton Burns and sophomore ace Noah Davis, might make an appearance knowing that this series can give momentum to the team heading into next year. As much as coaches and players will tell you until they’re blue in the face about how last year’s series don’t matter, they do and people remember.

3) The ‘Chos have an opportunity to play spoiler.

As it stands, the Titans are second place in the Big West Conference with a 10-5 conference record on the tail of Long Beach State. On top of this, Cal Poly is only one game behind Cal State Fullerton.

The Gauchos have the fun opportunity to ruin a potential region bid for CSF and play spoiler. If UCSB wins the series, Cal Poly can take its spot in second while Long Beach State can run away with the conference. This would be a monumental blow, considering Cal State Fullerton was once ranked as high as No. 4 in the nation after beating some competitive teams poised to contend deep into the season.

Looking ahead to Friday, the projected starter for the Gauchos is junior left-handed pitcher Kyle Nelson. Nelson’s last outing against UC Davis was fantastic; he got the win, going nine full innings while giving up three earned runs and striking out six in the process.

Nelson will square off against the Titans’ junior ace Connor Seabold. Seabold is 7-4 on the year with a 2.81 ERA.  In the righty’s last start, Seabold got the win at Hawaii, pitching eight innings, giving up one earned run and striking out seven.

The series will continue the next day, during which Noah Davis is expected to return to the rotation. The sophomore has been out for a couple of weeks with an undisclosed injury, but in his last outing on April 21 against San Diego State, Davis pitched impressively, going 7.1 innings with one earned run and six strikeouts.

His anticipated competition is CSUF’s John Gavin, a lefty with a 5-2 record and 3.33 ERA. Gavin’s last outing was also against Hawaii, but the junior Titan lost the decision, pitching six innings and giving up four earned runs to the Rainbow Warriors. However, the lefty did strike out eight.

Make sure to tune in to watch some of the best baseballs the Gauchos will face this season. In many ways, this series will be a benchmark for what’s to come from the team moving forward, as many players are expected to return next season.