The Daily Nexus
News
Pro-Israel Mural Defaced Amid Divestment Debate
May 10, 2017 at 6:40 pm by Maura Fox 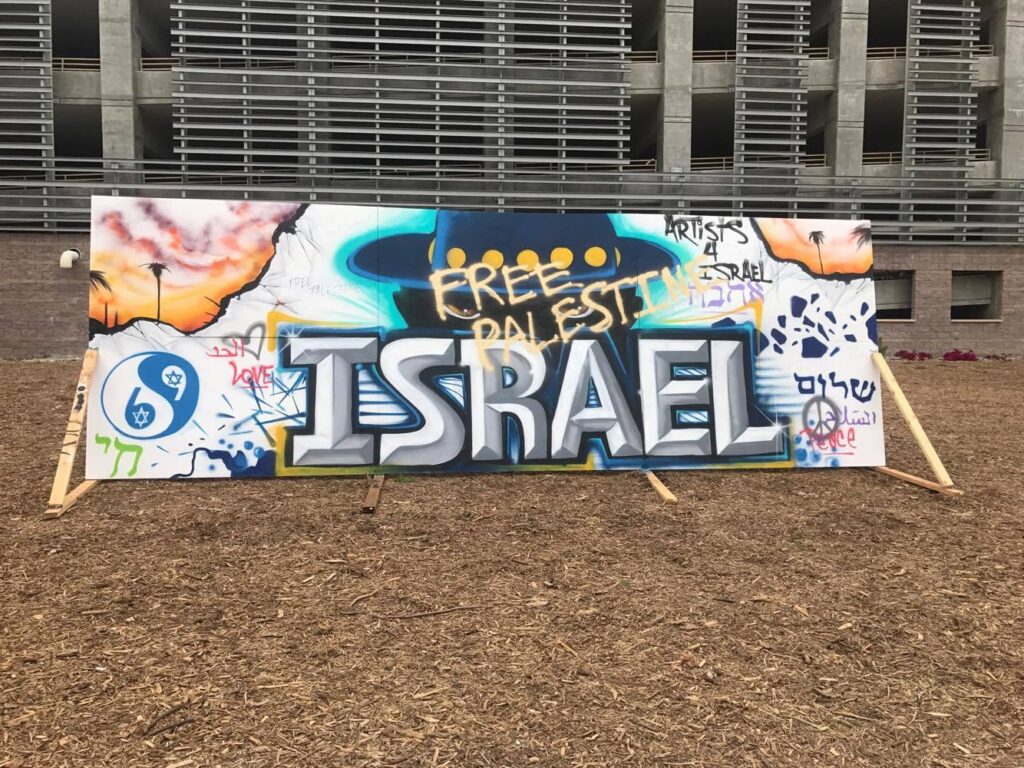 A pro-Israel mural near Pardall Tunnel was vandalized for the second time in three days on Tuesday, increasing tension between pro-Palestine and pro-Israel student groups days before a divestment resolution goes before Associated Students Senate today.

UCSB’s Students Supporting Israel, an international movement in support of the Jewish-Democratic state of Israel, created the sign with the support of Santa Barbara Hillel and Artists 4 Israel last week during “Israel Peace Week.” They installed the sign on May 4.

The sign displays the word “Israel” in large block letters. Defacers spray painted the words “Free Palestine” across the front of it.

Students for Justice in Palestine (SJP) proposed a resolution on April 23, urging A.S. to divest from companies that “occupy” Palestine territories. The A.S. Senate will vote on the resolution during tonight’s meeting in Corwin Pavilion.

SJP specifically asks that UCSB and the UC Regents divest from Raytheon, Northrop Grumman, Caterpillar and Hewlett Packard, although the group is asking the UC to divest from all companies that contribute to humans rights abuses in Palestine.

UCSB A.S. is the only UC government that has not passed a divestment resolution in recent years.

SJP released a statement on its Facebook page Wednesday morning “firmly and unequivocally” condemning the acts of vandalism and the accusations that SJP was affiliated with the incident.

“Our group was in no way involved in this incident, and denounces vandalism of any student group’s displays,” the statement reads. “It would be foolish and inflammatory to lay blame upon this SJP for acts perpetrated by those who are not involved in our organization and act independently from us.”

Nate Erez, the president of Students Supporting Israel and a fourth-year economics and accounting major, said he is not surprised the sign was defaced because “Free Palestine” was already written on the sign Friday in Sharpie. 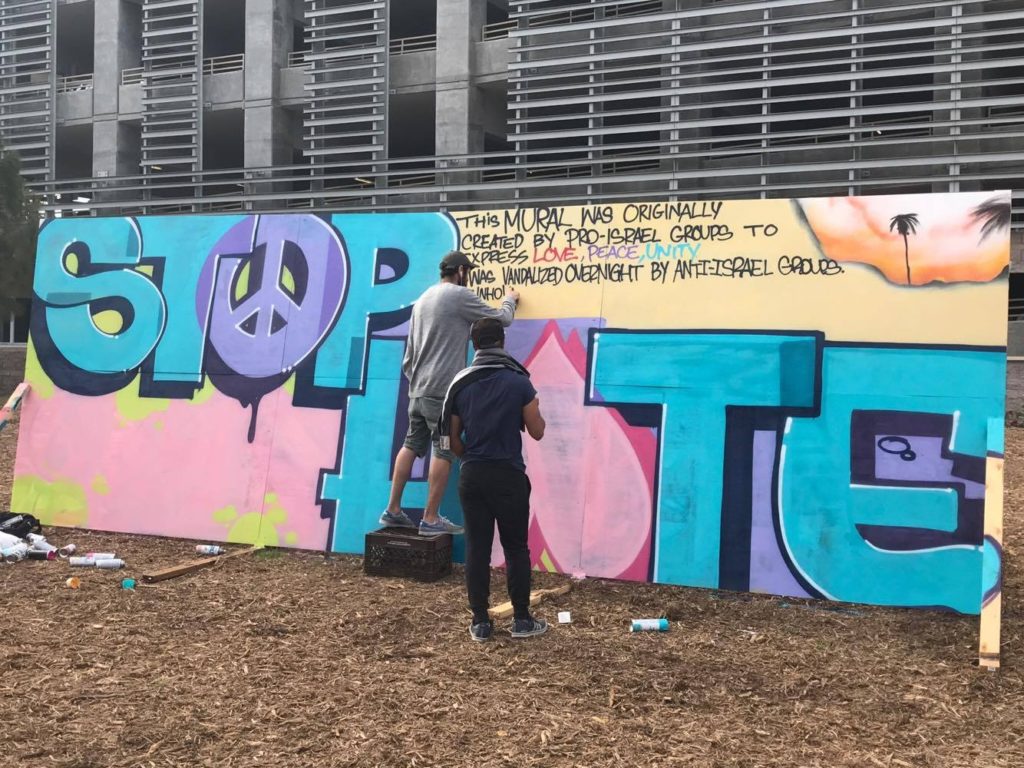 Erez said, however, that he is “personally saddened” by the vandalism.

“I personally worked so hard to get these artists up here to create something positive for not only our community, but what we felt was the entire UCSB community,” Erez said.

According to Erez, Artists 4 Israel wrote words such as “love” and “peace” in Arabic, Hebrew and English across the front of the sign and allowed student groups to write messages of love and unity on the back.

Erez said BDS “brings out anti-Semitism” on campuses across the nation and said divestment resolutions are “discriminatory” toward Jewish students and the religion.

He said such resolutions and groups “single out” one side of the complex conflict between Israel and Palestine and place blame “solely and squarely on Israel.”

“I believe you can be pro-Israel and pro-Palestine and pro-peace all at the same time,” Erez added. “And we should invest in peace, not boycott one side or the other.”

False flag, typical. These are the kind of vipers that will cry out in pain as they strike you. No, not all Jews, just the Zionist ones who support racism, colonialism, and apartheid. I shouldn’t be sorry for calling a spade a spade; Israel and her apologists exploit the Holocaust just to score political points and to distract everyone from their human rights violations. That’s not worth the dirt on the bottom of my shoe.

Someone explain to me how putting up a big ass poster that says “Israel” is supposed to support unity and peace? If you wanted to do that, why not add Palestine in there too? What a bunch of idiots. Own up to your shit. Stop playing victim.