The Daily Nexus
Water Polo
Beyond the Shore: Taylor Helps Lead Best Buddies
May 4, 2017 at 5:18 am by Tommy Pardini

Taylor Shore has other best buddies beside her beloved sport of water polo.

The standout senior utility player on the UCSB women’s water polo team is a leader both inside and outside of the pool.

As the team captain this season, Shore faced a tremendous task in leading a freshmen-filled squad just one season removed from a historic championship run.

“It was very challenging because we lost a lot of our seniors last year who were pretty strong personalities and were big leaders on our team,” Shore said. “Taking control and stepping into that leadership role was challenging but really rewarding.”

After being named a 2017 All-Big West second team selection after notching a team-high 46 goals this season, placing her sixth all-time in Gauchos goal scoring history with 141 career scores, Shore affects the game in many ways when she’s competing in the pool. 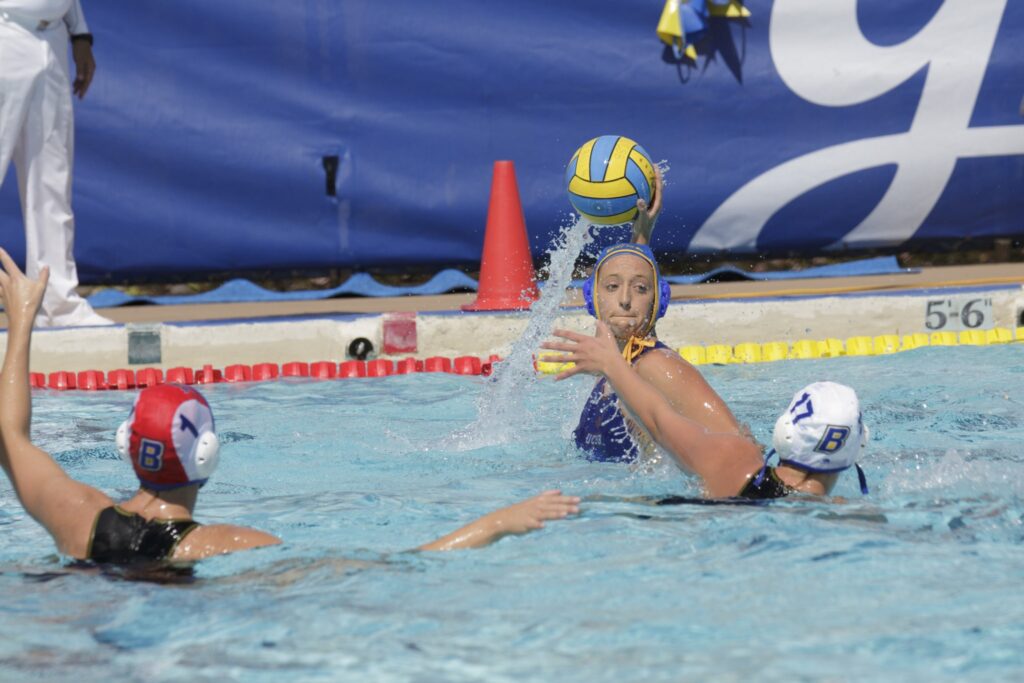 Although water polo has consumed a large portion of her life, Shore realizes that there’s more to her purpose than just her treasured sport.

When Shore was a freshman on the UCSB water polo team, a fellow teammate asked if anybody was interested in joining an on-campus club called Best Buddies.

“I like being involved in other things so I was like ‘why not?’” Shore said. “Then I came to really love it and it grew on me every year.”

Best Buddies is an international nonprofit organization with the mission of enhancing the lives of individuals with developmental and intellectual disabilities.

“I taught swim lessons in high school, and [people with disabilities] were always my favorite to work with,” Shore said. “I’m volunteering in a special needs classroom right now, so it’s just something I really like to do.”

The club organizes and attends one event per month where they develop friendships and connections with the disabled people or “buddies.”

“This year we kept them all on campus so more people could go,” Shore said. “Last month we had a picnic, played games and there’s always food, which is a positive. It’s really fun and pretty easygoing, which is good for me especially because balancing school and water polo isn’t the easiest thing to do.”

In the past, the club has gone to other places away from the campus, but this year they have tried to switch it up a little. No matter where they arrange these events, the connections are still refined.

“I’ve made a lot of friends in the club and also with the individuals with disabilities, I feel like I developed some strong relationships with them too,” Shore said.
A four-year member now, Shore has been the vice president this past school year in which she displays her leadership skills that she brings out every day in practice at Campus Pool.

“There’s a leadership aspect to [Best Buddies],” Shore said. “We have to coordinate with the board and things like that, so stepping up and doing different tasks is kind of similar as my role as captain.”

Everyone’s aware of the wide range of life lessons that sports provide, but not everyone knows what it’s like to make a difference in the lives of individuals who are less fortunate.

“It’s a really humbling experience and it shows you there’s more to the world than just water polo,” Shore said. “I’ve dedicated my life to water polo these past however many years, but it’s nice to get involved in other things and meet other people. It’s fun to be involved and make a difference in other people’s lives.”

Complementing the Corona, the California native’s ability to collaborate and lead others was also influenced by her role in dealing with essentially a fresh team. Yet, she withstood the process of instilling the culture amongst a pool of many newcomers.

This process occurred over the course of the entire season, whether it was just setting up the pool or going up against top-notch talent.

“It didn’t turn out how we wanted it to which is kind of a bummer, but I just try to remind myself of the journey,” Shore said.

Taylor Shore’s water polo journey began when she was just nine years old. She was almost destined to play the sport considering her family’s history with it.

Water polo was love at first sight for the crafty do-it-all Gaucho. Her admiration and dedication helped her achieve the goal of playing in college.

“I just remember day one falling in love with [water polo], and I’ve always been passionate about it,” Shore said. “Playing in college was always something I wanted to do; it was one of my goals for a really long time.”

Shore brought her competitiveness that she learned from growing up with her two brothers to UCSB where she excelled.

Even with the prominent role of captaining a young team on her shoulders, the team captain didn’t sink.

In her final season, Shore also led the team in points, steals and earned ejections. UCSB was 8-0 this year in games where Shore scored a hat trick.

While her days of scoring in a UCSB cap and suit uniform have come to an end, Shore’s philanthropic endeavors do not end as her collegiate career prepares to conclude.

Shore’s passion for helping people with developmental and intellectual disabilities will not stop here.

“I got a job recently at a place called PathPoint,” Shore said. “What we do there is kind of similar but a little different. I would work with adults with disabilities and help them develop life skills or find jobs or teach them how to pay their bills and things like that. I‘m going to do that over summer.”

However, she still isn’t done with water polo. After working over the summer, Shore plans on testing the professional waters overseas.

Very few players in UCSB women’s water polo history can match up with the career thatShore put together.

From winning the program’s first-ever Big West Tournament championship to leading a young group of players a year later, Shore has been a role model while laying the groundwork for the future of UCSB women’s water polo.