The Daily Nexus
On The Road
A Vegetarian Delight on a L.A. Getaway
May 3, 2017 at 12:00 am by Deepthi Sampathkumar

Coming to college, I was scared about the quality and taste of dining commons food. My fears very soon came to life as I grew tired of De La Guerra’s cheese pizza and Ortega’s waffle bar. Thus, I sought to attain an outlet for my food cravings. Although I usually would venture out into I.V. on weekends, sampling the classics from all of the restaurants, nothing matched the opportunity for food in Los Angeles. 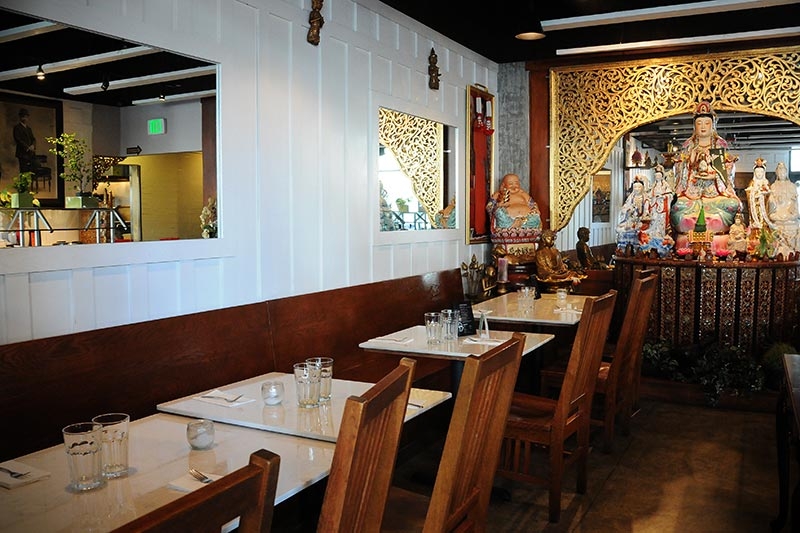 As a die-hard foodie from the Bay Area, I decided to take up this opportunity of being one and a half hours away from one of the food capitals of America. The times I decided to visit Los Angeles, I ensured that I would go on a food adventure seeking the best restaurants the City of Angels had to offer.

It was 12:30 p.m. on a sunny, bright Saturday in Los Angeles. I was standing in front of the world-renowned Dolby Theatre vigorously scrolling through food options on my cellphone. My restless and hungry friend urged me to find a restaurant quickly. “I’m trying to find the best Thai restaurant close by,” I barked back at her. That’s when I found Araya’s Place. I quickly looked to the bright 4.5-star rating it had on Yelp with numerous positive reviews and immediately informed by starving friends that I had made my decision.

Although the Uber maps said the restaurant was only four miles away from Dolby Theatre, the ride took a good 30 minutes before we arrived. The place was nestled in a small complex in the middle of a laundromat and a florist shop. As we walked in, I was taken aback by the size of the entire place — it was puny. Although the place was small, it was decorated neatly with classic Thai sculptures, vases and various other ornaments. We were immediately greeted by the enthusiastic owner of the restaurant as she directed us to a nearby table. Sitting down, we could smell the aromas of spices coming from the kitchen and taunting our enormous appetites even more.

Upon scanning the menu, I tried to look out for the vegetarian options, but I was later reminded by the friendly server that EVERYTHING in the restaurant was vegetarian- and vegan-friendly. Thrilled by this, my friend and I decided to dive into our selection as we went for the spiciest and highest-rated dishes we could find. We decided to order the Phad Phet Makhua — a fried tofu stir-fry served with veggies in a spicy yellow bean chili paste — and the Green Curry with soft tofu. As the server asked us for the spice level for the dishes from one to five, we hesitated to say five in fear that the spice would kill the taste of the food. However, the server reassured us that we would be very much able to handle the five, as the restaurant sported a “Hollywood” style of spiciness.

Thus, after placing our order, we eagerly awaited the arrival of our dish. As I took a look at the tables around me, I spotted an array of hot sauces and condiments placed at every table. As a result, even before our meal arrived, I, too, asked for the sauces for our table. As the server placed the sauces down at our table, I was delighted to see their variety — from the classic red chili paste to a black chili and white sesame oil.

Our prayers were answered after 20 minutes when the server brought out the food. The stir-fry came in first, and upon laying my eyes on the dish, I fell in love. As I dumped white jasmine rice on my plate, I scooped up the stir-fry from the serving plate and onto the white bed of fluffy rice. The Phad Phet Makhua was spectacular. The sauce was the right amount of spiciness mixed with a flavorful combination of distinct Thai flavors. The eggplant in the dish was seared perfectly, as I was able to cut into it with ease. As I chewed the eggplant, It was both crisp and juicy — oozing out the stir-fry sauce it was cooked in. My friend and I attacked the dish as we continued to heap on spoonfuls of the stir-fry onto our plate.

Five minutes later, the Green Curry came to the table. It was a familiar sight, as it did not look different from other Thai green curries I had seen in the past. The dish sported a light green color, with dark vegetables peeking out from underneath the coconut sauce. As I poured the curry onto plate, I was delighted by the crisp tofu pieces that stuck out under the sauce. The Green Curry was good but far from excellent. The curry was hearty, yet it lacked a more tangible and bold flavor, unlike its stir-fry companion on the table. The vegetables tasted fresh, but my friend and I were disappointed to find more veggies in the curry rather than tofu.

Thus, after some semi-disappointed bites of the curry, we resorted back to the stir-fry, inhaling every last piece left on the plate. The server checked in with on us multiple times to ensure everything was to our satisfaction.

Overall, Araya’s Place proved to be one of the best Thai restaurants I have ever been to. I strongly recommend the Phad Phet Makhua for foodies who want to experience spice with amazing flavor. Although the Green Curry was not a favorite of mine, I realized that the curry was a good palette complimenter to the spicy stir-fry dish we ordered.

This is awesome, I’m so hungry after reading this.

so tempted to checkout this place ,Very Well Written !