The Daily Nexus
Fine Arts
‘High Fidelity’ Tackles Sex, Manipulation and Rock and Roll
May 2, 2017 at 9:12 pm by Sam Wulff

The cast of Out of the Box Theatre Company in Santa Barbara took their closing night bows to a full house on Friday, March 28, for their stunning and high-energy performance of “High Fidelity,” a musical based off the 2000 movie hit.

The intimate black-box theatre was transformed for this production into a hip record store, complete with disco lights and a live DJ playing 1970s hits such as “Heart of Glass” by Blondie and “Let’s Get It On” by Marvin Gaye. The vibe and atmosphere of the room was any classic rock enthusiast’s dream, as the walls were plastered with concert posters of Jimi Hendrix, The Doors and David Bowie.

Powerful voices filled the cast of young actors, such as leads Will Schneiderman, who played pathetic and aimless record-store owner Rob, and Renée Cohen, who played rocker-turned-lawyer Laura. However, supportive characters such as Dick, played by the charming Gavin Juckette, and Anna, played by Katherine Bottoms, stole the show with their clear vocals and endearing characters that had the audience cracking up anytime they entered the stage.

“I love playing the character of Rob; it’s my favorite character I’ve ever played,” Schneiderman said. “It is a large, wordy role and one of the biggest roles of converging dialogue and songs.”

The musical is jam-packed with catchy, upbeat songs that draw from 70s influence, with genres ranging from Motown to rock to pure Broadway. David Hatfield closed the show with the soulful “Turn the World Off,” which, with its three-part harmonies from chorus members Nikko Arce and Rob Grayson, had the audience clapping and singing along.

“One of my favorite things about this musical is that it uses music to further tell the story,” director Samantha Eve explained. “A lot of people see musicals as just jazz hands, but with the shows we choose, the songs either develop the plot or character, and they tell the story in a more full way.”

Although the score and lyrics promise an enjoyable time, the plot of “High Fidelity” is problematic. The musical opens with leads Rob and Laura at the start of their breakup, though the audience is left in the dark as to the cause.  For most of the musical, heartbroken Rob is calling, yelling at and stalking his ex-girlfriend. Eventually, the audience learns the cause of the breakup: that Rob slept with another woman, causing secretly pregnant Laura to get an abortion. 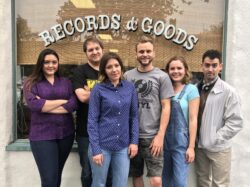 Courtesy of Out of the Box Theater

With this as a backstory to the characters, the entire storyline feels wrong, as you are expected to be rooting for the two leads to reconcile, but as they embrace and reunite with a kiss by the end, it seems that Laura is falling into the trap of a cheating, manipulative jerk who should have been left in the past.

The entire musical seems to be portrayed through the sexist eyes of the male leads, as woman are referred to as sluts and sloppy seconds, and while one could make the argument that these are the actions of an inconsolable, purposeless man who is capable of change, the character of Rob is simply not remorseful enough by the end of the musical for the audience to be able to root for his relationships. In fact, aside from the characters of Dick and Anna, none of the characters are sympathetic or even likeable, as they all appear apathetic to one another’s problems.

At the end of the musical, Rob musters up the admitted first apology of his adult life, and it seems like an episode of “The Twilight Zone,” as Laura forgives all of the cheating and manipulation of the past, and the audience is meant to feel uplifted. It seems that although Rob “is not the bad guy, not all the time at least,” his character lacks any true repentance and, well, fidelity, but still gets everything he desires out of life. If one can look past the main romantic plot line, “High Fidelity” offers fun songs and dances that the performers at Out of the Box bring to life.

As the only theatre in Santa Barbara performing contemporary productions, Out of the Box focuses on bringing new material to the stage. Past shows include “Spring Awakening,” “Wild Party” and “Heathers the Musical.”  Eve is not only a seasoned actor herself, as she is seen in many of her own productions as well as others, but she is also a talented director who sees to the smallest details of production, down to the themed mixtape cookies in the lobby. The meticulousness and professional quality of the small theatre is demonstrated by the talented actors on its stage as well as the shows produced.

I think you linked the wrong website at the end. It should be outoftheboxtheatre.org.

Wow, well said! Based on this review of the show, I sure would like to see it! It sounds like this author really understands the value of the arts and the relevance to college students. I also enjoyed the quotes from the people involved. Keep it up Daily Nexus writers!