The Daily Nexus
Sports
UCSB Gears Up for Summer Basketball Camps
April 27, 2017 at 5:07 am by Sean White

The mission to rebuild the UCSB men’s basketball program is in full effect during the team’s busy offseason. At the forefront of the Gauchos’ resurgence have been the hirings of new Head Coach Joe Pasternack along with the additions of Associate Coach Louis Reynaud and Director of Basketball Operations David Miller to the coaching staff thus far.

But the offseason grind isn’t just full of madness. Rather, it includes some fun, as the team’s Twitter account announced it will be holding UCSB basketball summer camps last Tuesday. 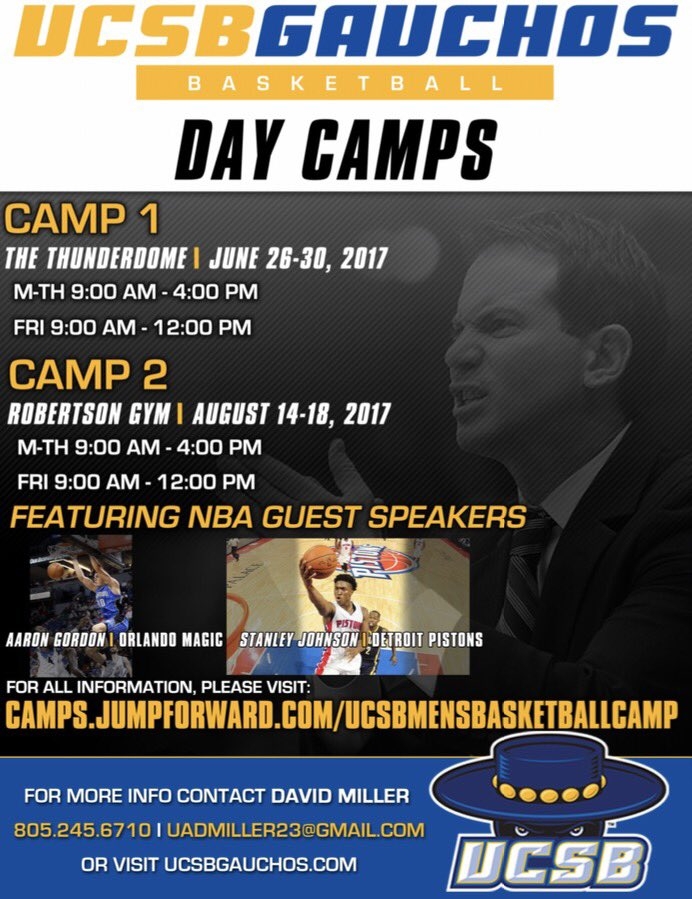 “Our focus with this is that Coach Pasternack really wants to get out in the community,” Miller said. “[We want to] let everyone in Santa Barbara meet our new staff, get to know all the kids and, hopefully, make new Gaucho fans.”

The camp aims to “provide boys heading into grades 2-8 the opportunity to work with our coaches and players on the basic fundamentals of the game of basketball.”

Adding incentive to the camps are the scheduled appearances of NBA guest speakers — current Detroit Pistons forward Stanley Johnson and Orlando Magic forward Aaron Gordon — who were both former University of Arizona stars during Pasternack’s tenure with the program.

“We wanted to link Coach Pasternack’s former players at Arizona that have had a bunch of success,” Miller said. “Also, to show the community that those are the type of players that we’re looking to bring here: high quality, character kids that are successful on and off the court. It will be good for them to speak to the kids and let them know about basketball but also about taking care of business in the classroom and community.”

The city of Santa Barbara is no stranger to NBA presence as it has developed into a basketball hub over the years.

With teams such as the Sacramento Kings, Memphis Grizzlies, Cleveland Cavaliers and Los Angeles Lakers electing to have their training and minicamps at UCSB, Santa Barbara’s mellow, relaxing atmosphere has become a popular commodity amongst teams looking to work hard and develop genuine bonding.

The P3 Sports Performance facility, located near the beach on the American Riviera, serves as one of the main offseason attractions to many players and teams relocating to Santa Barbara.

Defined as the “Peak Performance Project,” P3 has served as home for training and performance enhancement to an array of professional, amateur and out-of-state athletes.

“With P3 being here, it’s huge for us because, NBA guys in general, we want them to come work out on our campus; we want them to come play in the gym. We want to bridge that gap,” Miller explained. “They’re all here and training, [which] is perfect because we’re less than 10 minutes away from P3. It’ll be good to be able to get NBA players to [UCSB], especially if they have time to come speak to the campers.”

UCSB has even become home to the likes of Kobe Bryant and Michael Jordan as the hosting location to each of their youth basketball camps.

With plans to reinvent the culture of UCSB men’s basketball, the team’s staff is committed to taking the program beyond the court by establishing a universal influence amongst its supporters.

“We want everyone here to see what Coach Pasternack is about,” Miller said. “He’s a big guy with the kids; his own son is going to be here, so he’ll be a camper, too. He really wants to show the community that it’s not just about winning games; there’s a bigger picture. If we can get the whole community involved, that’s great. That’s what we want to do, especially with these camps so [people] can get to know him and our staff.”

Determined to utilize its resourceful platform at hand, the UCSB men’s basketball coaching staff is focused on reinventing Gaucho basketball with one primary influence: a love for the game.