The Daily Nexus
Opinion
Abusers in Office: Do Wealthy Men Pay for their Actions?
April 27, 2017 at 5:00 am by Hannah Jackson 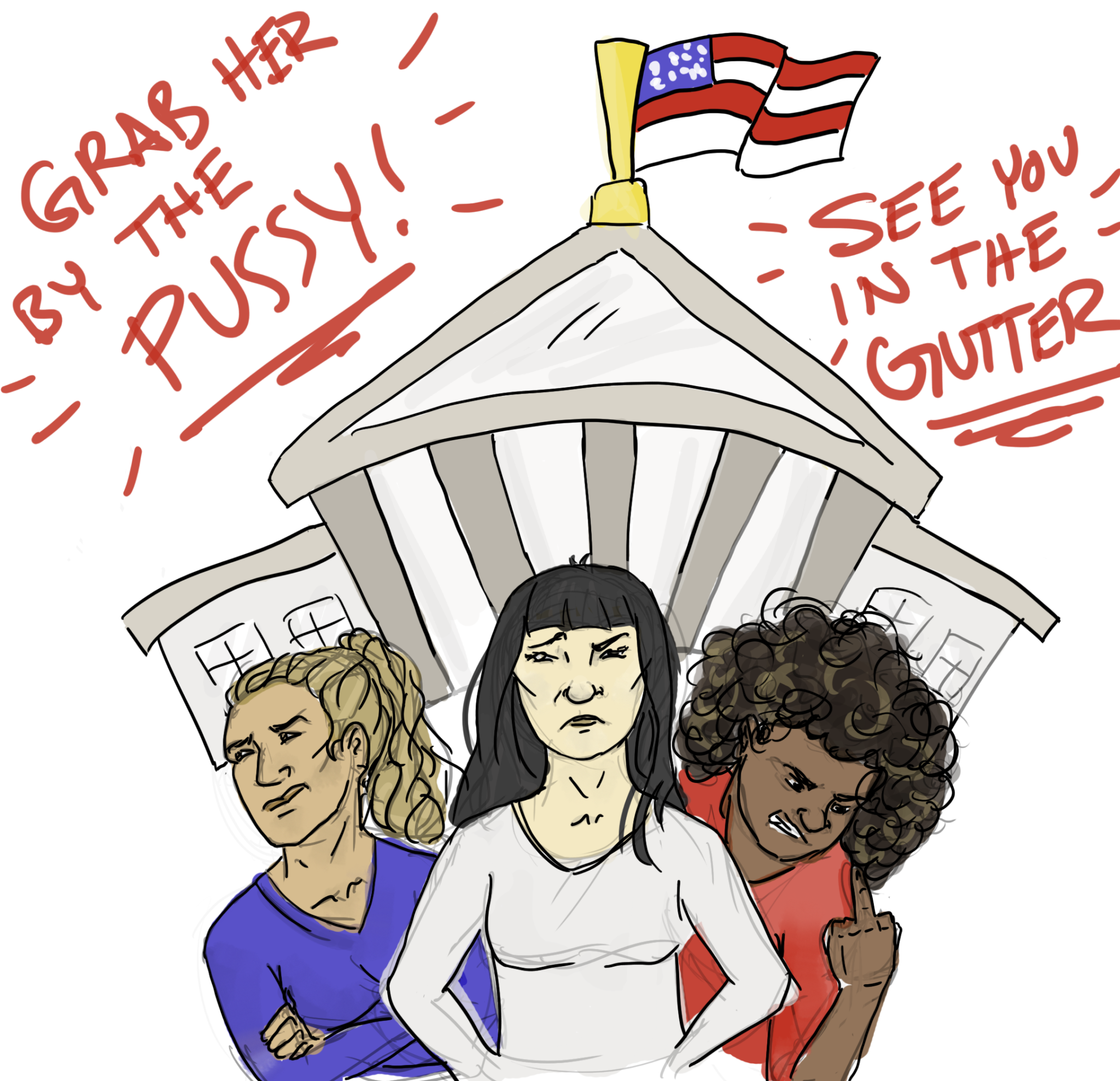 Allegations of abuse are charges that can get an employee fired from your local Chili’s, yet with time it has become apparent that this kind of behavior runs rampant in the White House. Since the election, reports of abusive behavior have surfaced (and resurfaced) about the president, his top advisor Steve Bannon and his former nominee for labor secretary Andy Puzder. If this kind of conduct doesn’t fly in jobs held by everyday workers, why is it normalized and accepted in the case of the leader of the free world and his staff?

The beginning of claims of Donald Trump’s abuse began with his first wife Ivana, who attested in their 1989 divorce deposition that Trump raped her a year earlier in a fit of rage over a painful procedure to reduce a bald spot. Trump has since faced a barrage of claims of sexual violation, from Miss Teen USA contestants, who attest to the former pageant owner walking in unannounced while they were changing, to the 13 women who came forward during his presidential campaign to detail his unwanted and unreciprocated sexual advances.

President Trump has vowed to take legal action against all of the women who have made allegations against him, though he has yet to do so. Even if these statements were not true, the concrete evidence of Trump’s lewd behavior is disturbing enough. The sexualization of his daughter Ivanka when commenting on her figure in interviews and the release of his infamous “locker room talk” video in which he brags about the power his celebrity grants him to accost women have proven his utter disrespect for women, as he sees them merely as objects.

Andrew Puzder, Trump’s original pick for labor secretary before Puzder withdrew from consideration, also faced allegations of abuse from his ex-wife, Lisa Fierstein, who went public on the Oprah Winfrey Show in 1990 to discuss battery of high-class women. Fierstein claimed that in a custody battle over their children, Puzder threatened wife, saying, “I’ll see you in the gutter.” Months after the episode aired, Fierstein recanted her testimony as part of her custody agreement. Though it is said the two now have a civil relationship, that does not change the fact that he is a perpetrator of domestic abuse and one who was very close to having a position in the highest office in the United States.

While domestic violence knows no gender, sexuality, political party, wealth, religion or race, it is certainly easier to have an outcome that protects the abusers when they have the financial means or status to buy the silence of their victims…

As his own former wife said, “Most men who are in positions like that don’t leave marks. The damage that I sustained, you can’t see. It’s permanent, permanent damage. But there’s no mark and there never was,” she continues as the credits roll on the episode. “They don’t hit you in the face, they’re too smart.They don’t hit you in front of everyone.” It is also notable that much of the backlash Puzder faced was for employing an undocumented housekeeper, rather than for his abusive tendencies.

Steve Bannon, former executive chair of the alt-right website Breitbart News and current aide to President Trump, has also faced his fair share of domestic violence charges. Though Bannon is rumored to be circling the drain with his position in Trump’s administration, his abusive past is unsurprisingly not the cause. On January 1, 1996, police arrived at Bannon’s home following a 911 call. His then wife claimed Bannon grabbed her by the neck (while eight months pregnant with twins) and broke the phone she was using when he realized she was trying to call the police.

Officers found the crying woman with marks on her necks and wrists. The court documents also account that the couple had gotten in three or four more physical altercations, for which they went to counseling. The charges against Bannon (including domestic violence, battery and dissuading a witness) were dropped after he threatened his ex-wife, telling her if she proceeded to court he would make sure that she would be found guilty, and bought her off.

The trend of wealthy men using their power to exploit women and buy their silence is not a new one. While domestic violence knows no gender, sexuality, political party, wealth, religion or race, it is certainly easier to have an outcome that protects the abusers when they have the financial means or status to buy the silence of their victims, as seen in the case of Donald Trump, Andy Puzder and Steve Bannon.

The United States appears laughably hypocritical in its actions taken against sexual assault and domestic violence (like when Trump proclaimed April to be Sexual Assault Awareness and Prevention Month) and sets a terrible example by allowing abusers access to the highest office. This notion that sexual assault charges can ruin a man’s career has been clearly negated by the outcome of the 2016 election and essentially screams that powerful and wealthy people do not have to pay for their actions.

Hannah Jackson believes no amount of money and/or power should excuse sexual assault.

So when it comes to Democrats who have a history of sexual abuse, e.g. Bill Clinton, Eliot Spitzer, Anthony Weiner, John Edwards, multiple Kennedy’s, etc. all I hear from Ms. Jackson is crickets. Hypocrite. Her comments are politics, not morals, and no Democrat is going to hold a Democrat accountable because they are on their team. Mary Jo Kopechne was not available for comment.

She wasn’t available for comment (unless you read neurally neutralized “minds”) when she “was available”.

Did you have a point with that insertion — or just a proclivity for non sequitur (like our current “President”)?

Running away from the facts aren’t you? Or do you even know who Mary Jo Kopechne was and what happened to her (hint Google is your friend)? Simply put the Kennedy’s (and other Democratic politicians) do much worse things to women than Trump and it’s Trump you Democrats want to beat up on. You don’t want to get the point so of course you won’t get the point. Others who pay attention to the facts will get it.

Are you an idiot or just as brain dead as Mary Joe was after the accident (perhaps both)? I asked about your inclusion of that sad moment in US political history (using a brain dead woman as a political football) and you respond with yet another non sequitur as well as a gratuitous assertion bearing no resemblance to fact. Hint for those with impaired reading comprehension — my query “Did you have a point with that insertion?” is not logically followed with a false inference (e.g., I do not know who she was) and more off-my-point blather about which party… Read more »

I said the author was a hypocrite. Looks like you are too.

What in the name of sanity did I state that was hypocritical?

My moron filter now is turned on (since the Nexus will not provide one).

BILL CLINTON IS A RAPIST INFOWARS.COM