In the final match of the regular season, the No. 48 UCSB women’s tennis team was able to beat the rival Cal Poly Mustangs at home by a final score of 4-1.

The meet began with doubles play, during which UCSB was able to quickly take the doubles point in two straight sets, despite not fielding any of the three ranked pairs the Gauchos currently have according to the latest ITA rankings. The tandem of senior Melissa Baker and junior Amanda Atanasson defeated the Cal Poly pair of freshman. 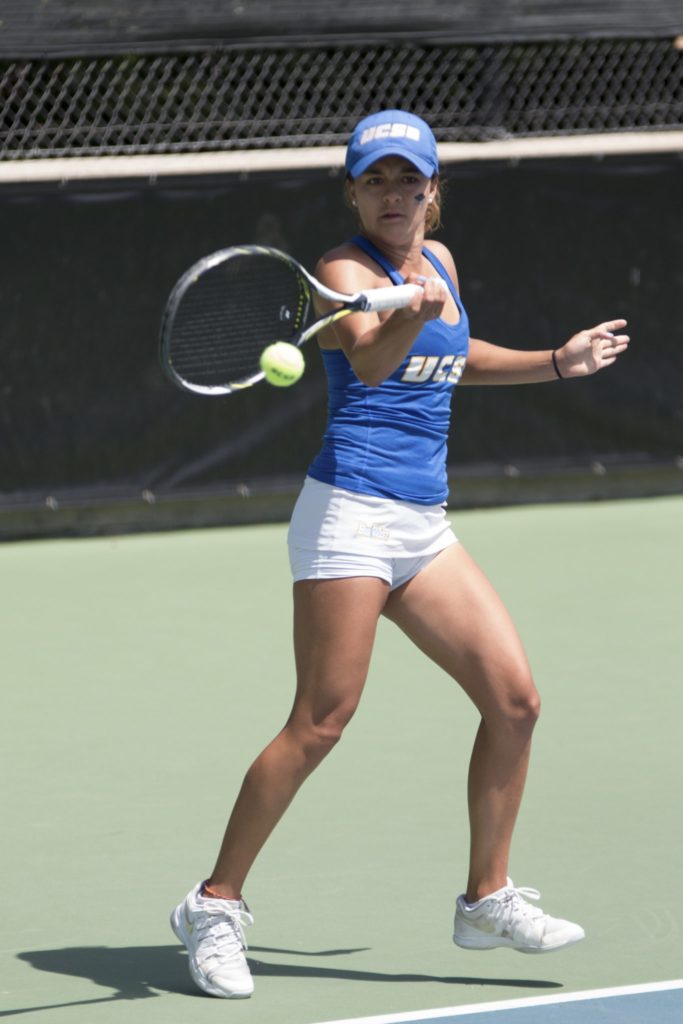 At a score of 1-0, UCSB looked to continue its momentum into singles play, during which Yamada gave the Gauchos their first singles victory after defeating Mustang sophomore Celine Gruaz, 6-0, 6-1.

However, the Mustangs were able to respond with a singles victory of their own after Reed bounced back to beat Atanasson 6-0, 6-2 after suffering a loss to Atanasson in previous doubles play action. With Cal Poly getting its first points on the board, the meet was at 2-1 in favor of the Gauchos, but the UCSB women’s tennis team was able to regroup and run away with the rest of the meet.

With Cal Poly getting its first points on the board, the meet was at 2-1 in favor of the Gauchos, but the UCSB women’s tennis team was able to regroup and run away with the rest of the meet.

The team went on to win the final two matches needed to clinch the victory in consecutive fashion as freshman Jaimee Gilbertson defeated Saltzen 6-4, 6-2. Gilbertson’s win over Saltzen increased her already team-leading record of 17 singles match victories to 18.

Baker delivered the final blow to Cal Poly after defeating senior Sayaka Tsugai 6-3, 6-1, and the Gauchos officially became the winners of the women’s tennis Blue-Green rivalry three years in a row.

Both Da Silveira and Baker were participants in last year’s Blue-Green rivalry, and it was good to see both players make significant contributions to this year’s rivalry in the form of picking up a victory in doubles and singles play.

During the seven-game streak, the team was able to beat six conference opponents, which allowed for the Gauchos to improve on the 1-1 record they had before the month of April.

Their play on this hot streak has resembled the play of last season when the team won the Big West Championships, and they are hoping to carry their current momentum into the tournament to win the title two seasons in a row.

In order to have the right to share the Big West Conference title, the Gauchos needed to get a win over the Cal Poly Mustangs and a loss by Hawaii to Cal State Fullerton.

Although UCSB won its match this weekend, the Rainbow Warriors were able to get by a tough Titan team, winning their match 4-0. The Gauchos will enter the tournament at the No. 2 seed without the Big West title they won just a year ago.

The UCSB Gauchos will travel to Indian Wells to kick off the Big West Championships, playing their first game on Friday, April 28, with a time and opponent yet to be announced.