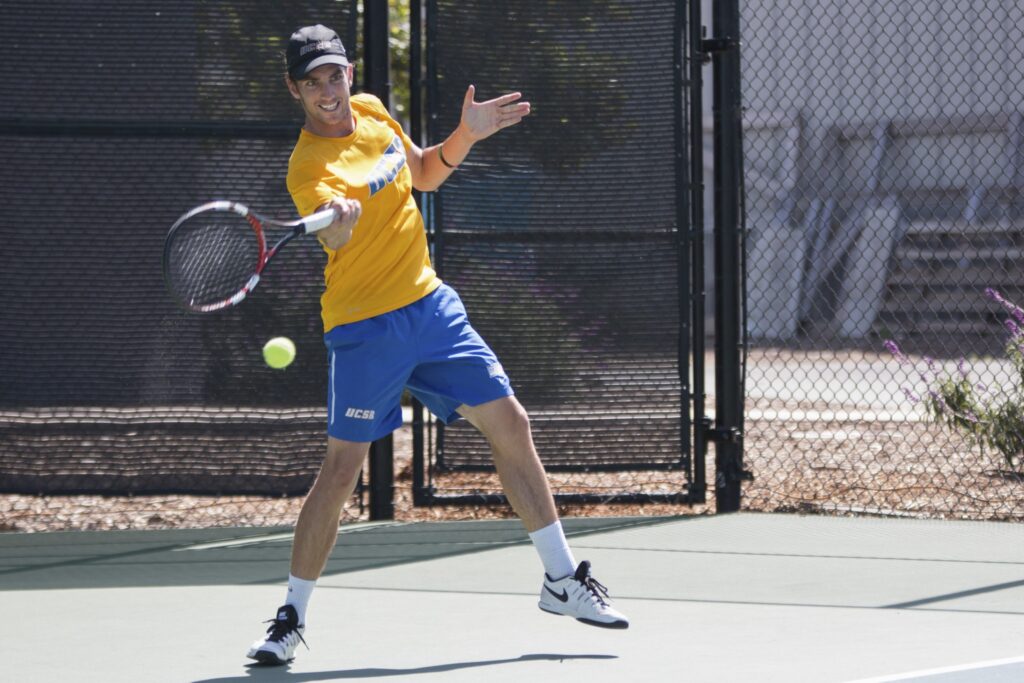 The UCSB men’s tennis team finished the regular season with a bang, as they bested their Blue-Green rival Cal Poly last Saturday at home. The 5-2 victory against the Mustangs gave the Gauchos the first-place seed in Big West Conference standings and their 10th consecutive win to close out the season.

Following this stellar performance, the results now have Santa Barbara at 17-5 overall on the season, with an undefeated Big West Conference record of 5-0.

Cal Poly dropped to 16-7 on the season and also fell to the third seed in the Big West standings, as UC Davis swept its dual-meet matchups against UC Riverside and UC Irvine.

The Gauchos’ April campaign still remains unblemished, as their last loss came well over a month ago. This is also the second straight year in which UCSB went undefeated at 5-0 in the Big West.

There’s a lot to report in regards to Saturday’s meet, as an action-packed doubles portion went underway. Court 2’s sophomores Nicolas Moreno de Alboran and Anders Holm tipped the balance early in favor of the hosts after a solid 6-1 victory. Court 3 saw a hard-fought 6-4 win for Cal Poly as the doubles sets were split evenly at 1-all.

Court 1 proved to be a nail-biting decider, as the No. 55 doubles duo of Cal Poly, seniors Corey Pang and Ben Donovan, went head-to-head versus the No. 29 UCSB duo senior Morgan Mays and junior Simon Freund. The greater ranking ultimately prevailed, as the Gaucho pair earned the 7-6 victory and clenched the doubles advantage point for their team.

“I thought I played well,” said Mays after the match, “I had a lot of fun and left it all out there on senior day, my last day here.”

At the halfway break, Mays, along with fellow senior Teague Hamilton, were the recipients of team honors, as Saturday was men’s tennis senior day.

As UCSB entered the singles portion at 1-0, the home side just needed a 3-3 split in court results in order to win the day and earn the first-place seed.

The final singles match was perhaps the most heated; Court 1’s Mays and Pang battled it out into the meet’s third hour. The match went into three sets and remained heavily competitive throughout. Unfortunately, the result favored the visiting side as Pang defeated Mays at 3-6 / 6-1 / 6-4.

It was to no avail, as the Gauchos took the 5-2 victory in the meet as well as a potential bid for NCAA tournament consideration.

This concludes the men’s tennis regular season, as the Big West Tournament is set to commence this Wednesday, April 26, at Indian Wells, Calif.