A common complaint during A.S. Elections season is that candidates make promises they think will get them elected, despite not having any prior work to show for such a promise. 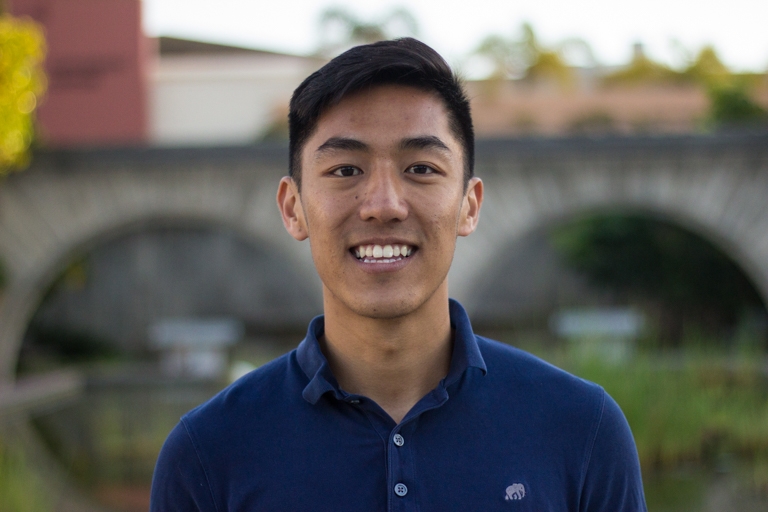 Le, a transfer student from Sacramento, makes his bid for president having only spent a little over two quarters at UC Santa Barbara. His work as a student advocate, however, extends years before his arrival at the university, granting him the privilege of now rubbing elbows with some of California’s key lawmakers.

The newly formed Isla Vista Party runs on a platform of eliminating tuition and representing all student groups, especially those pockets of campus that have been historically underrepresented in A.S. The best candidate for accomplishing this, however, is not the Isla Vista Party candidate. It is Le.

As a delegate to the California Democratic Party, he has already been working with the state legislature to eliminate college tuition. Whether he wins the election as A.S. president or not, he will continue in this task.

Le also seems more privy to a wide range of student voices in his decision-making process than Nawar Nemeh. When asked how he plans to “reach across the aisle” if elected A.S. President, Nemeh told the Nexus that he has a set of goals and “others can choose to work with me or not.”

Though he is readily qualified, a few pieces of Le’s platform may need some work. For one, Le plans to address student fees by implementing a program for students to run their own businesses on campus.

The Nexus questions the feasibility of such a program.

The campus should consider it a privilege that students have to pick between highly qualified presidential candidates. Le could take a few lessons from Nemeh on the inner workings of A.S., but ultimately Le is the representative for all students at UCSB.

Hey! For anyone reading this I believe its important for you to know that Le’s plans to cut student fees hurt the very students that the Nexus believes he is “representative of.” The reaffirmation bill (makes it harder for orgs to get their funding passed) recently pushed and passed by Campus United senators puts CAPS, DSP, MCC, IV TENANTS UNION, EOP, HEALTH AND WELLNESS, CARE, RCSGD, and literally every other OSL and AS funded group on campus in jeopardy. (Including the Daily Nexus) Stay informed about elections and protect our student services from irresponsible cuts!

No not really; it only puts them in jeapordy if they don’t prove themselves as valuable assets to the voters. Go look at past reaffirmation numbers, if the rule had been changed 10 years ago almost all of them would’ve passed still.

That not entirely accurate. The Association pre-2006 did not offer lots of student services because the threshold was so high. Luckily they were able to make a deal with the student body to lower the threshold in 2006, right before the recession. When the recession hit, funding from the state of California and from the UC system lowered significantly. Associated Students was the only institution on campus with money, and with that money it provided services that students needed that the State stopped providing. When you say look at the last 10 years, you are suggesting taking a look from… Read more »

I could be wrong but I believe the suggestion is over the past ten years, even though the threshold is only 50+1, those that passed would almost always hit 2/3

You are conflating new fees and reaffirmation. In 2006 yes the threshold for new fees was lowered in preparation for the students initiative. However, reaffirmation is the act of voting to preserve existing fees. Right now, you need a 60% NO vote to not reaffirm a fee. This bill seems to change it to 50+1, so if 50+1 of the student body don’t want a fee anymore, then it’s gone. However, my point was that from 2007-2017 the fees that were up for reaffirmation all got over 50+1 YES votes

This is dumb. Hieu repeatedly stated that he doesn’t want to cut services. He just doesn’t want 100% of AS revenue to come out of students pockets – hence money making student-run businesses. If you’re gonna criticize the guy, at least accurately summarize his position

Hi! First, the reaffirmation bill was pushed by Campus United senators and puts many orgs in jeopardy bc they might not have as much broad support because they are services for populations of students that are minorities on this campus, that is why the reaffirmation bill is dangerous. Second, prioritizing reforming the source of student fees at a time when we should be using the president’s office to build broad student support to push for CA investment in the UC system is too small of a vision. Third, you’re right i was incorrect about his position and i apologize, but… Read more »

You’re kidding. The guy supports the 48 Dollar fix. Did you read the article? How would that not be using the Office of President to advocated for reinvestment in the UC?

Copied from below
“Funny thing about this is that the party bus in question was paid for by UCSA so any accusations of misuse of student fees (yes this was a waste of student money) should be directed at UCSA not a student that took a snap to poke fun at said misuse.”

PULL UCSB OUT OF UCSA! UCSB STUDENTS PAY FOR 1/3 OF THE TOTAL BUDGET, WHILE ALL OTHER CAMPUSES FREE RIDE

Hey! For anyone reading this, UCSB STUDENTS (you) PAY $600 A YEAR IN FEES. That’s more than any other UC campus! Hieu does not want to cut fees – in fact, there is no proposal to cut fees. He wants to raise funds to offset the tax you pay.

Did you know that UCSB students also get the best return on our student feed than any other UC! Our CAPS services alone are the best in the UC system and this is a result of the funding CAPS receives from student fees.

Le hasn’t even been a student for a year.

And he’s done more than you have in three

Nawar hasn’t held a position for a year

Nawar has literally quit every AS position he’s held

I heard Nawar used student fees to pay for his party bus during a progressxve conference –> imgur.com/a/khgPo

SCANDAL: NAWAR MISUSED STUDENT FEES TO BUY A PARTY BUS. STUPID ENOUGH TO BRAG ABOUT IT ON SNAPCHAT! Sad! –> imgur.com/a/khgPo

Funny thing about this is that the party bus in question was paid for by UCSA so any accusations of misuse of student fees (yes this was a waste of student money) should be directed at UCSA not a student that took a snap to poke fun at said misuse.