The Daily Nexus
Music
Phantogram Performs Haunting Indie-Pop at Arlington
April 20, 2017 at 2:59 am by William Emmons

Dream pop duo Phantogram showered spacey reverberations over Santa Barbara’s Arlington Theater Tuesday night. In the wake of their Coachella performance, Josh Carter and Sarah Barthel brought an assortment of tracks to the venue, mostly those featured on their latest LP, Three. This is the band’s third studio album from a discography full of successes scattered over the past several years. The group’s sound is airy, atmospheric and eclectic. It is in a barn in upstate New York, near their home of Greenwich, where the duo writes and records their sounds. Within this music one can observe the influence of artists such as David Bowie, Sonic Youth and J Dilla. Phantogram’s collaborative history is impressive: working with figures like Outkast’s Big Boi and The Flaming Lips, in addition to being sampled by Kanye West and A$AP Rocky.

A new creative direction came to fruition for the group with the release of Three, a project that helped refine sounds of melodic electronica and pop-rock that were explored on previous projects like Eyelid Movies and Voices. Opening for Phantogram was local Santa Barbara garage rock band Clean Spill. The quartet ripped through surf-flavored, animated indie cuts as a mob of what appeared to be the members’ friends cheered ecstatically. As Clean Spill concluded their set, the Phantogram team began to strip down the stage, postulating a more minimal appearance and coating the stage and its backdrop in white cloth. The drum set and synth were elevated, giving the stage more depth and pulling the front closer to the crowd. Concertgoers steadily filed into the auditorium, clutching their drinks as they found their spots in the red velvet seats of the Arlington. There was no time to waste as the entirety of the crowd planted their feet and jolted upward to greet Phantogram’s vibrant entrance.

The duo kicked off their set with an energetic rendition of “You’re Mine,” during which Barthel and Carter each oscillated between a duality of voice and instrument. The crowd reciprocated the track with vivacious singing and dancing, many attendees never missing a lyric. One of the most notable aspects of Phantogram’s performance was their live visual production. An amalgamation of psychedelic lights and projections saturated every inch of the venue, allowing the audience to delve deeper into the band’s richest sonic elements.

Barthel and Carter were warm in their interaction with the audience. On numerous occasions, Barthel locked eyes with a concertgoer as they both lost themselves in song. The crowd was comprised of an assortment of individuals, many of whom appeared to have waited a long time to witness Phantogram in concert. At one point, a father carried his son to the front of the venue and shared the endearing moment with the duo, lovingly swaying to the music. 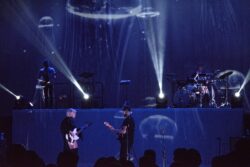 Another highlight of the show was the track “Don’t Move.” The song’s whimsical vocal samples heightened the emotional glow of the room and posited warm sentiments to all in attendance. Additionally, Barthel’s vocal skill bled through on the cut, exhibiting a dynamic range of tones and cadences. Perhaps the most encapsulating moment of the performance was “When I’m Small.” A dusty drum loop pulsed as Barthel exhibited angelic vocals and Carter ripped sharp leads on guitar. As the duo’s set neared an end, they encouraged attendees to dance to the song “Calling All,” the closer to Three. The empowering refrain of this track was accompanied with a colorful projection of lyrics onstage, evoking high-soaring energy across the aura of the theater.

For an encore performance, Carter centered himself at the front of the stage with nothing but a microphone. Nostalgic home videos covered the stage’s backdrop, and the band slowly built up a touchingly beautiful sound that came to be “Barking Dog,” a song that seems to touch on pain, depression and suicide. Afterward, the band performed crowd-pleasing hits like “You Don’t Get Me High Anymore” to wind the show down.

Phantogram brought an impressive set to the Arlington, incorporating a plethora of sounds from their various influences and inspirations. Their performance was colorful, impassioned and energetic. Carter and Barthel’s own influence is sure to expand as they navigate even more worlds of sound in their future music.