Scientists have recently discovered microorganisms that can self-mutate. How? They possess a unique genetic element. The project was led by Blair Paul, the lead author and postdoctoral fellow in the Marine Science Institute, and David Valentine, co-author and professor of earth science and biology at UCSB. Co-authors from UC Berkeley, UC San Diego and UCLA also contributed to the research. The findings were published in the journal Nature Microbiology, under the title “Retroelement-guided protein diversification abounds in vast lineages of Bacteria and Archaea.”

“Finding that these microbes are capable of targeting specific genes for mutation tells us that they might have a means of changing their existing genes rapidly,” Paul said.

These previously unidentified microorganisms are unlike typical microbes because they contain minimal genomes and are even missing genes to synthesize compounds to help build the cell. These particular microorganisms can be up 500 times smaller than bacteria such as escherichia coli, more commonly known as E. coli. 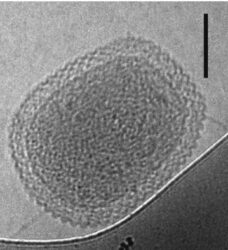 The bacterial cell above is thought to be a relative of the microorganisms that encode diversity–generating elements. / Courtesy of Brigit Luef

Their size is the reason why they were undiscovered until recently. They could split into small enough parts, invisible to the scientific surface. The amount of information coded in these microorganisms are minimized because of their microscopic size.

Valentine adds that these microorganism are presumably not fully self-reliant, they participate in some sort of symbiosis or parasitism.

A team of UC Berkeley researchers discovered these microorganisms in groundwater environments collected from an aquifer near the Colorado River.  Scientists used these particular groundwater samples because the molecules were tiny enough to pass through the filters that capture traditional microbes.

The genomes in these microorganisms were detected and sorted amongst the DNA sequences. The study resulted in the discovery of the self-mutating features, allowing researchers into the microscopic world of ecology and evolution.

“What we have found is a genetic basis by which these organisms selectively mutate their own genes and drive diversification of their own proteins.” Valentine said.

Since these microorganisms were recently discovered, researchers have not yet been able to determine the objective of the vast majority of the diversified proteins. These genes can alter the proteins they encode or can disturb the genes themselves, targeting them for elimination from the genome.

About 500 genomes out of 2,500 were examined. Specific genes that could drive targeted evolution were identified. Nearby regions of the genome were closely inspected to detect patterns of site-specific mutations.

Paul explains that researchers tried to assign cellular functions for these targeted genes in order to understand why the cells are exploring different combinations of coding sequences. In their findings, there was a prevalence of a significant genetic element: diversity-generating retroelements (DGRs).

DGRs function in the diversification of DNA sequences and encoded proteins. They are a family of genetic elements found in bacterial and bacteriophage genomes. The self-regulation of DGRs is currently unknown, but the the specific sites for mutation are able to be controlled.

The microorganism’s genome is reduced in order to have a minimalist lifestyle. However, the microorganism must possess an apparatus to allow for the evolution of new capabilities while eliminating the unnecessary ones. The DGRs may permit the organisms to do both.

“While we don’t fully understand why these ultra-small organisms evolved [to] this capacity, we can infer that it’s an important tool by which they adapt to a changing environment,” Valentine said.