Following a 2-1 series win over CSUN, the UCSB softball team will face off against a very talented Long Beach State team this weekend. Long Beach is coming off a series sweep versus Cal Poly and currently holds first place in the Big West standings, while the Gauchos are tied with CSUN for third place. This will be the first meeting between the two teams this season.

Being tied for third, the Gauchos are 24-20 overall and are sitting right above .500 in conference play at 5-4. There are plenty more opportunities for UCSB to climb the ladder in the Big West, particularly this weekend.

Despite being below average in the overall wins and loss columns at 19-20, Long Beach State has ascended during the Big West schedule with its leading 7-2 record.

The Gauchos have a decent amount of momentum heading into this weekend, with four wins in their last six games, and could use it to knock off the first place 49ers. But one must acknowledge Long Beach’s consistent start as it has made considerable progress since last season, improving from their final 2016 league record of 12-9 and presently holding the league-best record. 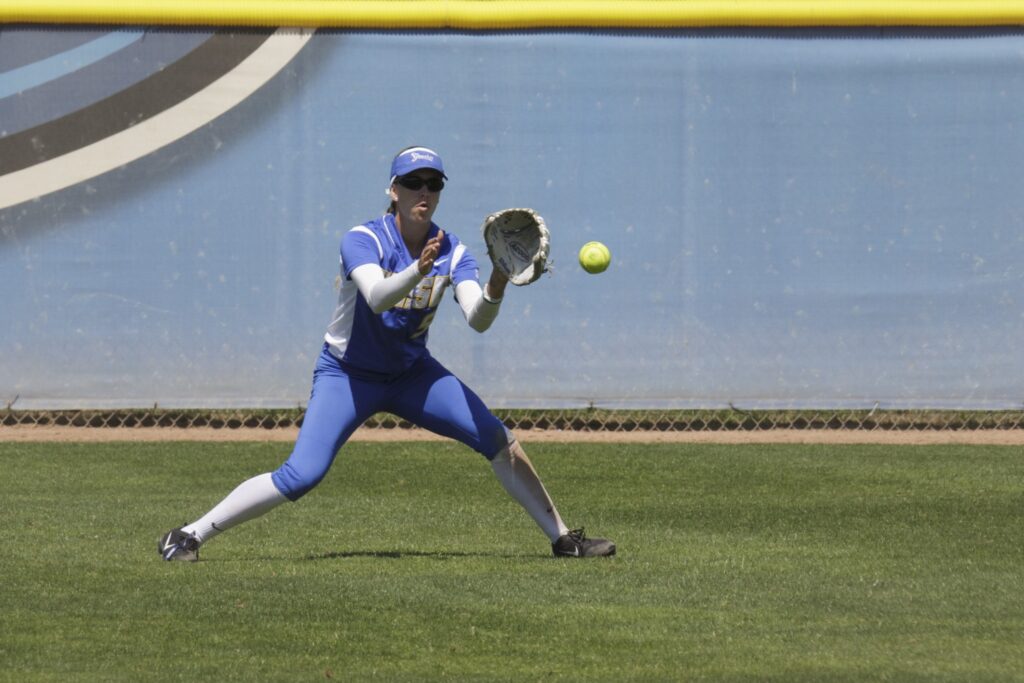 After bouncing into the outfield, Jessica Johnston reaches for the ball. Dustin Harris / Daily Nexus

The UCSB softball squad is coming off of a second-straight series win. Gaucho Jessica Johnston earned the Big West Softball Field Player of the Week for her performance against CSUN. Johnston, a junior outfielder for UCSB, brought in three runs in the last game facing the Matadors to secure the series win.

Batting .364 for the year, Johnston owns the second best hitting clip on the team. This is an improvement on last season, in which Johnston held a .322 batting average. On the season, Johnston has four homers following her most recent shot over the right field against CSUN.

Another leader for the Gauchos this season has been sophomore Sierra Altmeyer. The infielder has so far this season averaged a team-best .406 batting percentage. Aside from this impressive percentage, Altmeyer has homered nine times this season in addition to producing 30 RBIs, both team highs.

Altmeyer and teammate Johnston will be looking to knock off the current first-place team this weekend while the 49ers will attempt to increase their lead in the league.

Last season the 49ers won the series against UCSB, outscoring the Gauchos’ 26 runs to eight over the course of three games.

Along with having to be aware of the 49ers’ bats, Santa Barbara will hope to combat LBSU’s thriving defensive play. Long Beach is coming off not allowing a single run in 28 innings in its series sweep of the Mustangs.

Much of Long Beach State’s success this year has been thanks to senior transfer Sammi Gyerman. The 49ers’ outfielder is currently leading the team in batting percentage with a .328 average in addition to scoring 12 runs for her team over the season thus far. Gyerman’s performance in the past week prompted her nomination for the Big West Softball Field Player of the Week.

Also leading the 49ers this season has been sophomore infielder Nichole Fry. After an impressive first season that saw the 2016 true freshman start all but one game, Fry has been batting an average of .289 this season to go along with a team-best 24 runs scored. Over the weekend, Fry recorded her second home run of the season, securing the 2-0 win for the 49ers over the Mustangs.

The Gauchos will travel to Long Beach in hopes of making up for last season’s series against the 49ers, with Game 1 being held Saturday, April 22, at 1 p.m. Following Game 1, Game 2 will be held at 3:30 p.m. The series will end with Game 3 on Sunday the April 23 with a start time of 1 p.m.