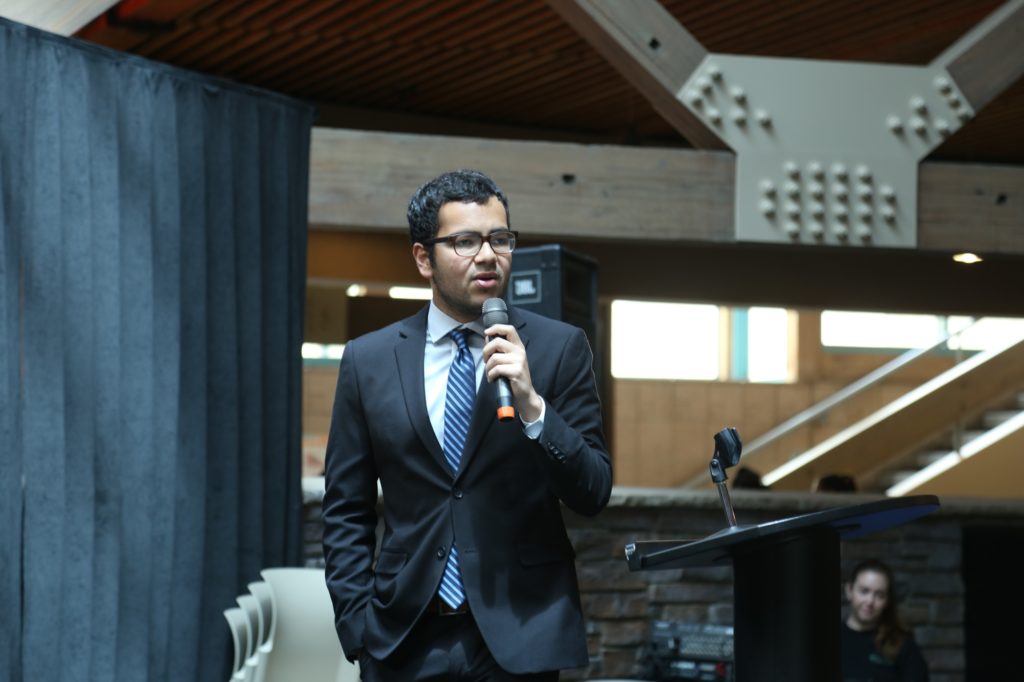 Nawar Nemeh, the Isla Vista Party candidate for A.S. president, said he has a “pre-existing understanding” of A.S. through his three years of experience in the student government. Jenny Luo / Daily Nexus

Delivering  opening remarks first, Nemeh said his main priority as president would be to implement  the “$48 fix,” a proposal to eliminate tuition through a $48 increase in taxes for the median California taxpayer.

“It’s something we can do together, but it’s something that we as a party can’t do without you all,” he said.

Le also remarked on college affordability,  saying in his opening remarks that he hopes to have A.S. work with the state legislature to eliminate student debt.

“Additionally, I would like to make an inclusive environment, given what is going on federally, to ensure that all students — whether you lean one way or another — feel included and that your voice is empowered here on campus,” Le said. 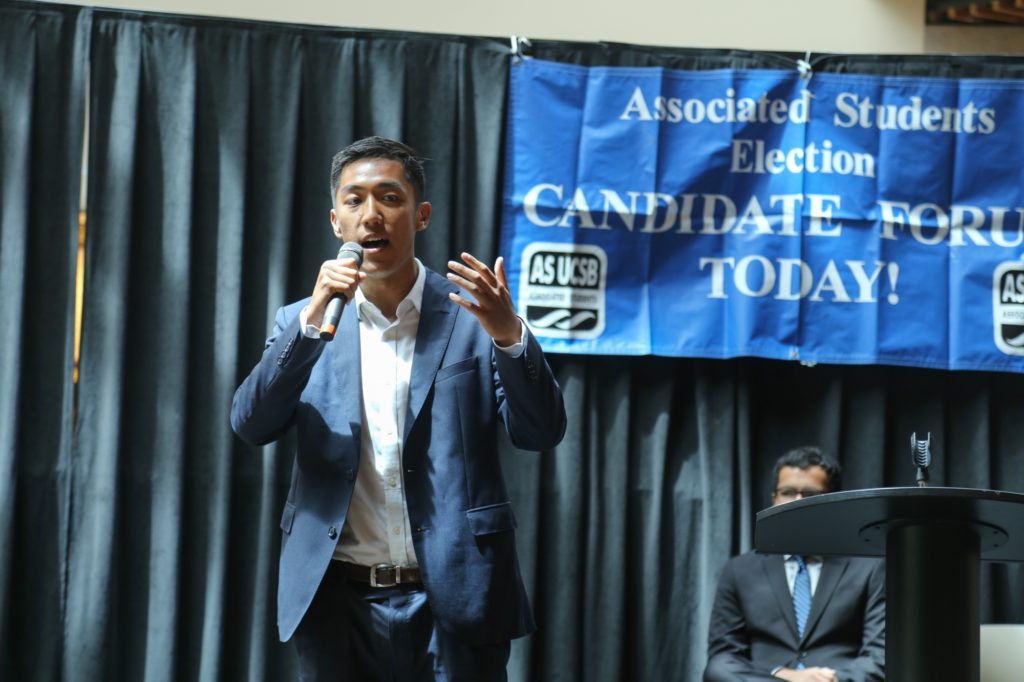 Andy Doerr, manager of the A.S. Media Center, moderated the forum. He posed 12 questions, created prior to the debate by the A.S. Elections Board, and gave the candidates one minute each to answer. Doerr also relayed questions asked anonymously by audience members.

Here are the rest of the highlights from Monday’s presidential debate:

In each of their closing remarks, both candidates said again that they want to focus on reducing the costs of attending university.

Well Nemeh lost my vote with his tone deaf comments on the Israel Palestine conflict.

How was it tone deaf? Not all Israelis are Jewish and not all Palestinians are Muslim. There are plenty of Jewish people who support Palestinian statehood. Religion isn’t totally unrelated, of course, but it’s presumptive and ignorant to assume that Jew = Israel and Muslim = Palestine.

But to say that it has nothing to do with religion ignores the problem of anti-semitism that tends to crop up when the Israel-Palestine issue is discussed. Jewish students in the UC system have been questioned over their ability to be impartial on the issue because they are Jewish, and anti-semitic tropes are often used by people who support BDS.

Nawar hasnt even spent a full year in AS, hes quit both positions as a On- Campus Senator and as the SAG Chief of Staff

After implementing revolutionary equitable voting systems and holding members of the AS Senate to account, let me tell you: Nawar left a sludge of a senate in order to implement real change. He may be demonstratively adamant in his progressive ideologies, as well as principled on the divestment issue and its subsequent campus climate issues. But thats because his story and his identity preclude those sentiments just like Mr. Le’s leads him to want to present himself as a safer candidate. Or a spin doctor. Regardless, the notion that Nawar Nemeh is a quitter is fallacy. I dont agree with… Read more »

Le’s comment about Israel-Palestine is overly simplistic and highlights how little he knows about the complexities of the issue. It’s not just a binary conflict between Muslims and Jews!