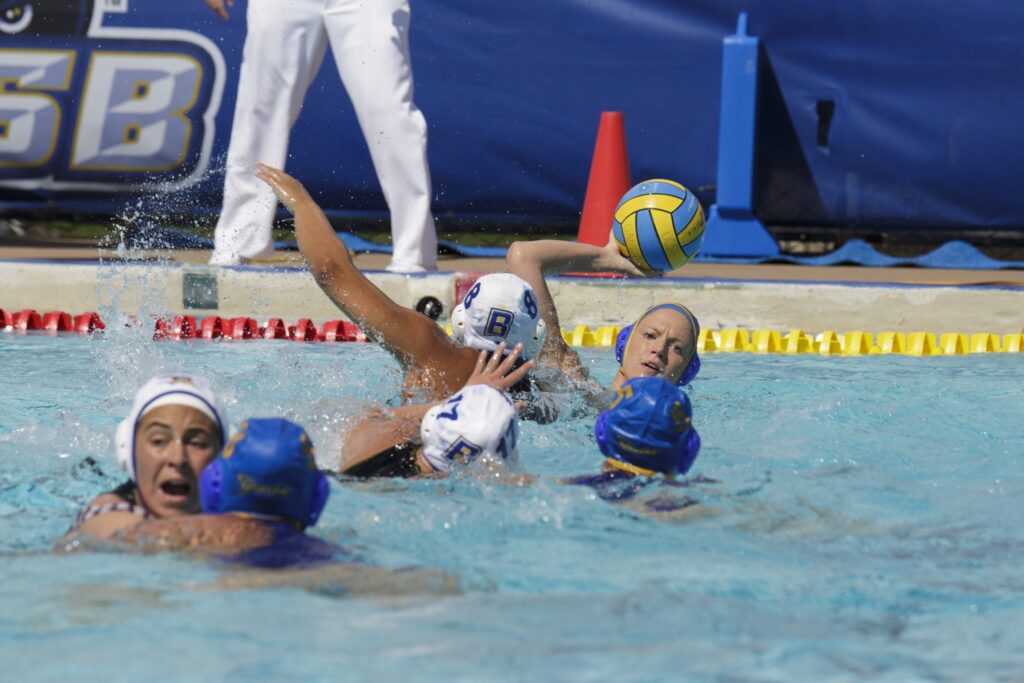 In an intense game with a raucous Senior Day crowd, the No. 12 UCSB women’s water polo team was defeated in six overtime periods in an extraordinary battle with No. 15 Long Beach State.

The Gauchos fought all game whether it was when they went down early or when they were down a goal with less than 15 seconds left in regulation.

“[Mental toughness] is something we talked about before the game, and we showed that we have it,” Head Coach Serela Kay said.

UCSB drops their third game in a row as they fall to 15-11 and remain winless in Big West play. LBSU improves to 16-10 overall (3-1 conference) with their seventh win in their last nine games.

After the first period, Long Beach State was ahead 2-0 after netting two open counter attack goals.

The Gauchos continued their attacking struggles in the second quarter as senior utility Taylor Shore’s goal was the only goal for the home side at the break. The 49ers had a 4-1 lead at the end of the first half.

UCSB found their groove in the action-packed second half.

In the third quarter, freshman utility Abbey Grosse’s goal started a three-goal run for the hosts.

A minute and a half after Grosse’s goal, senior utility Jenna Solberg got past her defender on the wing with a strong move before rifling the ball to the near post past the 49er goalkeeper.

Forty-five seconds later, Shore stole the ball near mid-pool and took it all the way for a breakaway goal to tie the game at 4-4 heading into the fourth quarter.This gave Shore her second goal of the game and number 42 for the season.

Coming into this game, UCSB was 11-1 in games in which the team captain scored more than one goal.

Long Beach scored the first two goals of the fourth quarter as Santa Barbara was running out of time. It wasn’t until the 2:41 mark when sophomore utility Sarah Kreiser scored on the well-executed power play.

Still needing one goal to tie it with 50 seconds remaining, freshman utility Sarah Snyder couldn’t capitalize on an open one-on-one with the Long Beach goalie.

At this point, it looked like the Gauchos would only have one more chance to tie it. Coach Kay, the reigning Big West Coach of the Year, called a timeout with under 15 seconds left to put something together to try to extend the game to overtime.

In the ensuing play, the ball came to sophomore utility Kate Pipkin who was being pressured by a 49er defender.

With the time winding down, Pipkin lobbed the ball to the far top corner, hitting the post and just crossing the line for the goal with only three seconds remaining in regulation.

The jam-packed fan section let out a thunderous roar as the game was heading into overtime.

“We had a really nice sized crowd with good fans, friends and family support,” Kay said. “That got our energy rolling.”

The Gauchos kept the momentum going as they were first to score in overtime. With two Long Beach exclusions, UCSB was granted with a 6-on-4 opportunity. After a patient attacking sequence, freshman utility Kate Coski found an opening and scored to give the Gauchos their first lead of the game.

In the second overtime period, freshman goalie Kenzi Snyder came through with one of her 13 huge saves in this game. Toward the end of the period with 19 seconds remaining and the shot clock turned off, UCSB could have held the ball for the victory.

Pipkin attempted a shot on goal for what looked like a mental lapse from the sophomore.

Long Beach State returned the favor with a last-second goal of their own after the shot deflected off a Gaucho’s fingertips and redirected into the back of the net to bring the game to sudden death overtime.

Early in the first sudden death overtime, the 49ers were on the counter attack for what appeared to be a sure goal from a one-on-one with the keeper.

A magnificent save from goalie Snyder in goal kept the game alive for UCSB.

“[Kenzi Snyder’s] definitely the backbone of our defense,” Kay said. “I’m fired up about how she played, communicated to the team and kept her composure.”

In a similar moment in the second sudden death overtime period, goalie Snyder saved the game once again with a huge save for the Gauchos in another one-on-one situation with the odds against her.

Suddenly, at the 1:58 mark of the period, Long Beach scored with a powerful shot to give them the victory by a final tally of 8-7.

The large home crowd was stunned as the seniors were defeated in their final game at Campus Pool. Even with these tough losses, the Gauchos continue to battle and put up a fight in each game.

After the game, Coach Kay’s message to the team was about taking advantage of the opportunity.

“It’s anybody’s game on any day,” Kay said. “Going into the next two weeks, I think that’s important for everybody to remember.”

UCSB will wrap up the regular season at Cal State Northridge on Saturday.