The Daily Nexus
Sports
Pasternack Aims To Wake ‘Sleeping Giant’
April 13, 2017 at 5:15 am by Jorge Mercado 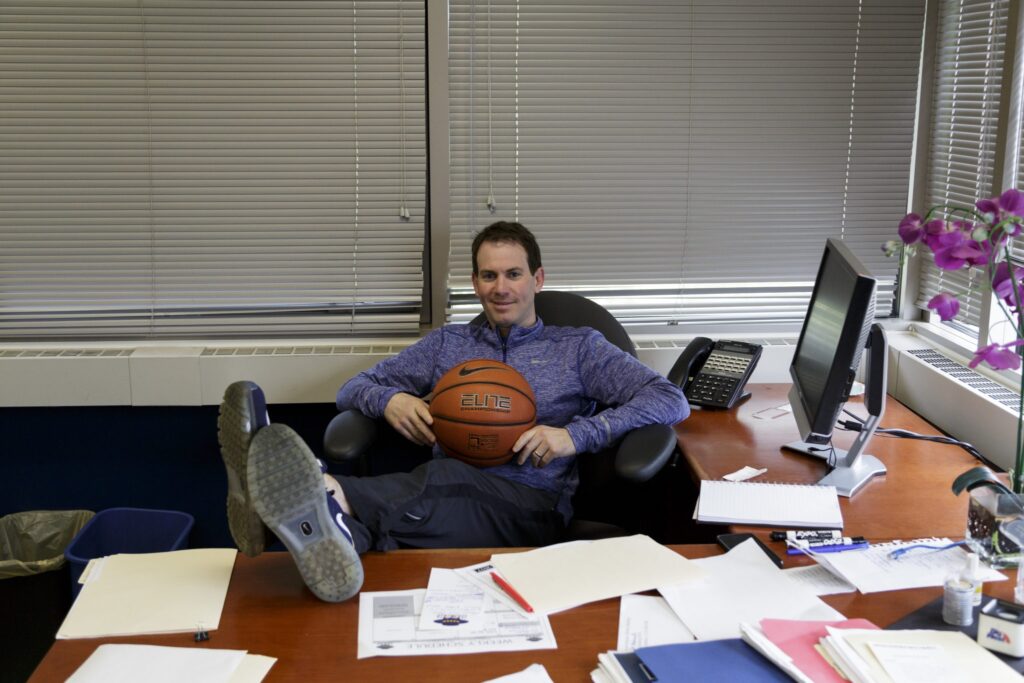 “I really believe this is a sleeping giant, and we could build this program to have great success in the Big West Conference.”

In 1998, after having not had a winning record in the past five years, the UCSB men’s basketball program hired a then 44-year-old Bob Williams to bring the glory back to Gaucho basketball.

In that same year of 1998, Joe Pasternack was just a young college student at the University of Indiana and spent his four years as a student manager for the Hoosiers men’s basketball team under legendary head coach Bob Knight. The 21-year-old was eager to go into the coaching profession soon after he graduated, but he didn’t know where to start, so he called around waiting for his opportunity.

Williams would go on to put together a wonderful program over his 19-year tenure, becoming the winningest coach in UCSB history, registering a record of 313-260 while bringing home three Big West Championships, three NCAA appearances and three Big West Coach of the Year awards.

However, all good things must come to an end. After an abysmal 6-22 record, which included a 4-12 conference record and a last-place finish in the Big West, the Gauchos were forced to move on to something new.

And just as Williams was brought in to revamp a program that was going through some struggles, a young 39-year-old associate head coach from the University of Arizona was hired and introduced on Tuesday, April 4, 2017, to bring glory back to UCSB basketball.

Over that same span, Pasternack built a solid resume of coaching gigs, ranging from being an assistant at Cal from 2000-2007 to being the youngest Head Coach in college basketball at age 30 when he took over for the University of New Orleans to his latest job at Arizona.

All that coaching, all that stress, all that fun came to fruition on that fateful Tuesday when he was given the keys to a program he called a “sleeping giant” on Gaucho alum Jim Rome’s radio show the day of his introduction.

Despite taking over a program that did put forth some of its worst basketball in decades in terms of record — with the aforementioned 6-22 overall record and missing the Big West tournament for the first time since 1998 — the New Orleans native is not afraid to come into UCSB and put his name and stamp on this institution’s basketball program.

“I think with any program, culture is the number-one priority, and culture isn’t just something you write on a piece of paper or put on a wall,” Pasternack said. “It’s your process on a daily basis and how you structure your workouts and hold yourselves accountable and taking advantage of all opportunities UC Santa Barbara has to offer.”

One of the biggest things that are known about Santa Barbara is not only the beaches and beauty but the brains behind a school that ranks among the top public universities in the nation — something that coach Pasternack values and beliefs will be a big factor in the rebuilding of the basketball program.

“To take advantage of getting an incredible education here and to graduate and be set up for the rest of your life, that’s part of the culture we want to instill here,” Pasternack said. “We plan on honoring the process, and honoring the process isn’t about the results but what it takes to get the results on a daily basis. We don’t want to just be Big West Champions; we want to be champions in all facets.”

Not many coaches have had the track record Pasternack has been able to attain in such a short amount of time. The Indiana alum is set to turn 40 on April 15, yet he has already received great tutelage under Knight, a winner of over 900 college basketball games, the second most in NCAA Division I history, and Sean Miller, the current coach at Arizona who has made three Elite Eight appearances, six Sweet 16 appearances and has brought home two Pac-12 Championships.

“The past six years at Arizona under Sean, who is a future Hall of Fame coach, and learning his system and being able to put together all the information I’ve learned over the past 20 years and picking out what I want to do best with my personality for our system to fit our personnel has been invaluable,” Pasternack said.

Along with that, Pasternack also has the advantage of this being his second head coaching job. While at New Orleans, Pasternack often struggled, amassing only a 38-54 overall record in four seasons; however, it should be noted that Pasternack was facing many problems during his tenure there, as he was helping rebuild a team that was affected by Hurricane Katrina.

“I’m really excited that I did have that opportunity in New Orleans,” Pasternack said. “I was 30 years old and I made a million mistakes as a young coach, and that is really helping me today in putting together a program, building a staff and managing a team the right way.”

One of the biggest reasons Pasternack was such a sought-after coach was because of his recruiting experience.

While at Arizona the past six seasons, Pasternack helped land the Wildcats a top-10 recruiting class, including a top-five recruiting class in four of those six years and was ranked as the 12th best recruiter in college basketball by ESPN last fall.

The former Cal assistant has built many different connections over the last 18 years, including many different international connects that have helped him land great players such as Lauri Markkanen who declared for the NBA draft after a wonderful freshman year this past season attaining First Team All Pac-12 after averaging 15.6 points per game and 7.2 rebounds per game.

The Gauchos are in need of some young talent that can come in and contribute right away, considering junior guard Gabe Vincent will most likely still not be ready for the start of next year and losing senior guard Eric Childress to graduation.

“Recruiting has been great so far,” Pasternack said. “We are receiving an incredible amount of interest from transfers, California kids, international guys and me being able to use my connections I’ve built over 18 years is really paying dividends right now.”

As a mid-major, part of UCSB’s road to success will be to build a very valuable home crowd, something that has dwindled over the last few years.

A stadium that holds 5,600 people, the Thunderdome only averaged 1,587 seats filled per home game, with the highest crowd being against rival Cal Poly, a game UCSB won, which had 3,306 people in attendance.

It’s no coincidence that teams with large home crowds tend to do the best, especially when it comes to conference play.

Pasternack wants to bolster this through the team’s rebuilding and would be aided by having a strong non-conference schedule to have the crowd constantly anxious throughout the season, and not just when the Mustangs come to town.

“There are a lot of games that have already been scheduled, even before I got here, but we want to bring an exciting game to the Thunderdome. Personally, I want to dive head first with the students, it is my number one priority to be available to the students,” Pasternack said.

“I want to go on-campus, hand out the free tickets and get to know them because our success is tied to their interest in our program. The best mid-majors in the country have dominant home courts, their students are a huge part of why they win, and I want to figure out what we can do to make this a great home court environment.”

It is clear one of Pasternack’s priorities is the rebuilding of this program. But he, like most adults, also has other priorities that keep him busy like having a family. Pasternack is a father to two kids, one boy, and one girl, who he loves very much. They are his fun, and they are his go-to during his free time. His son Joe IV loves basketball just like his father, while his daughter, Lilly, currently enjoys gymnastics. 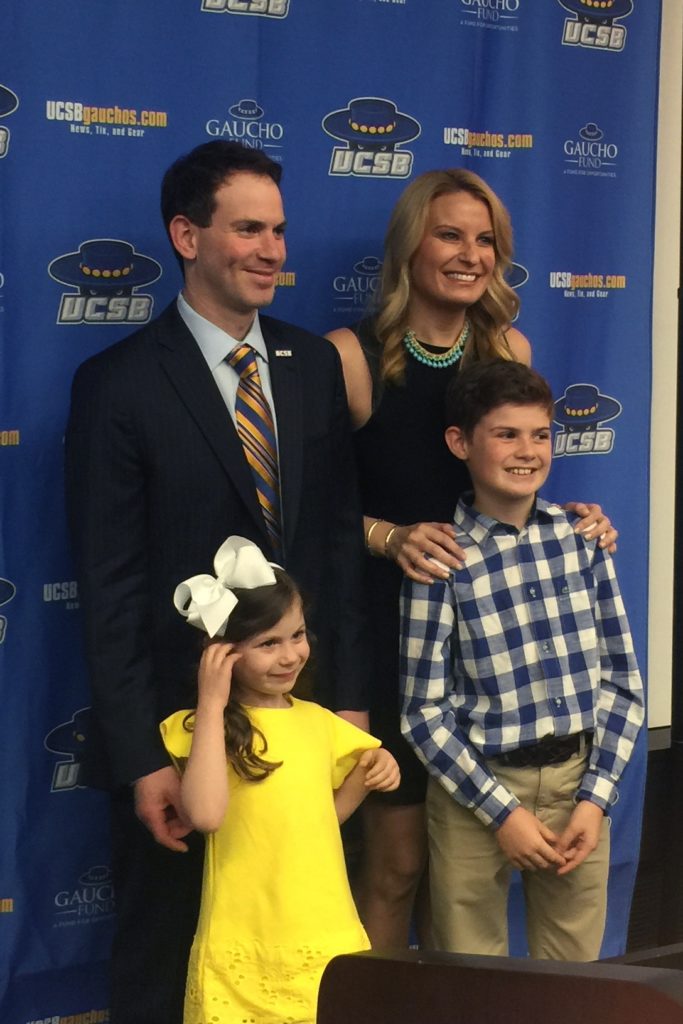 “I don’t have a lot of interests,” Pasternack chuckles. “My life is basketball and my family. I have a 10-year-old and a six-year-old, and what I do for fun isn’t golf, it’s spending time with my kids and going to dinner with my family.”

Along with his kids, Pasternack is also married to his wife, Lindsay Pasternack, and like most married couples, the beginning of their relationship is a cute story.

“My now brother-in-law was the radio play-by-play at Cal where I got the job at 22-years-old, and he was nice enough to let me ask her out on a date, and now the rest is history.”

Time will tell if Pasternack pans out as well as other UCSB coaches have, but it is undoubtedly the drive this young coach has. His eagerness to help build back not only this program but also this fan base has many fans happy.

At ucsbgauchos.yuku.com, a site composed of many gaucho alums that are all about Gaucho sports, 42 of 53 fans that participated in a poll on the hiring of Pasternack gave at least an 8/10 rating with three of those users giving a perfect 10.

All good things must come to an end. But that doesn’t mean more good things will happen. In fact, maybe something better is coming our way.