The Daily Nexus
Science & Tech
Drought in East Africa Predicted by Dataset
April 13, 2017 at 11:21 am by Stephanie Pernett

East Africa is a drought prone, food and water insecure region with a highly variable climate. Due to these conditions, estimating rainfall can challenging.

However by using finely tuned climate tracking tools, scientists from the UC Santa Barbara/U.S. Geological Survey Climate Hazards Groups (CHG) were able to predict Somalia’s current drought and the poor harvest season that took place in Somalia in 2011 and Ethiopia in 2015. Recent climate conditions in Ethiopia have been compared to the conditions that led to the famine the country suffered from 1983 to 1985.

Additionally, the UCSB CHG along with Florida State University have combined their station archives and expertise to produce a high quality gridded ‘Centennial Trends’ precipitation dataset

Other observations have been acquired from the national meteorological agencies and augmented with data provided by other universities. The name ‘Centennial Trend’  does not measure centennial linear trends in African rainfall, but it is a dataset of the analysis of seasonal and decadal trends within a centennial context.

Following the 2011 famine in Somalia, the CHG which is part of the Famine Early Warning Systems Network (F.E.W.S N.E.T), has focused on refining methods for predicting and monitoring droughts. Improving these methods would help international agencies to predict potential food deficits and mount response efforts more faster than before. 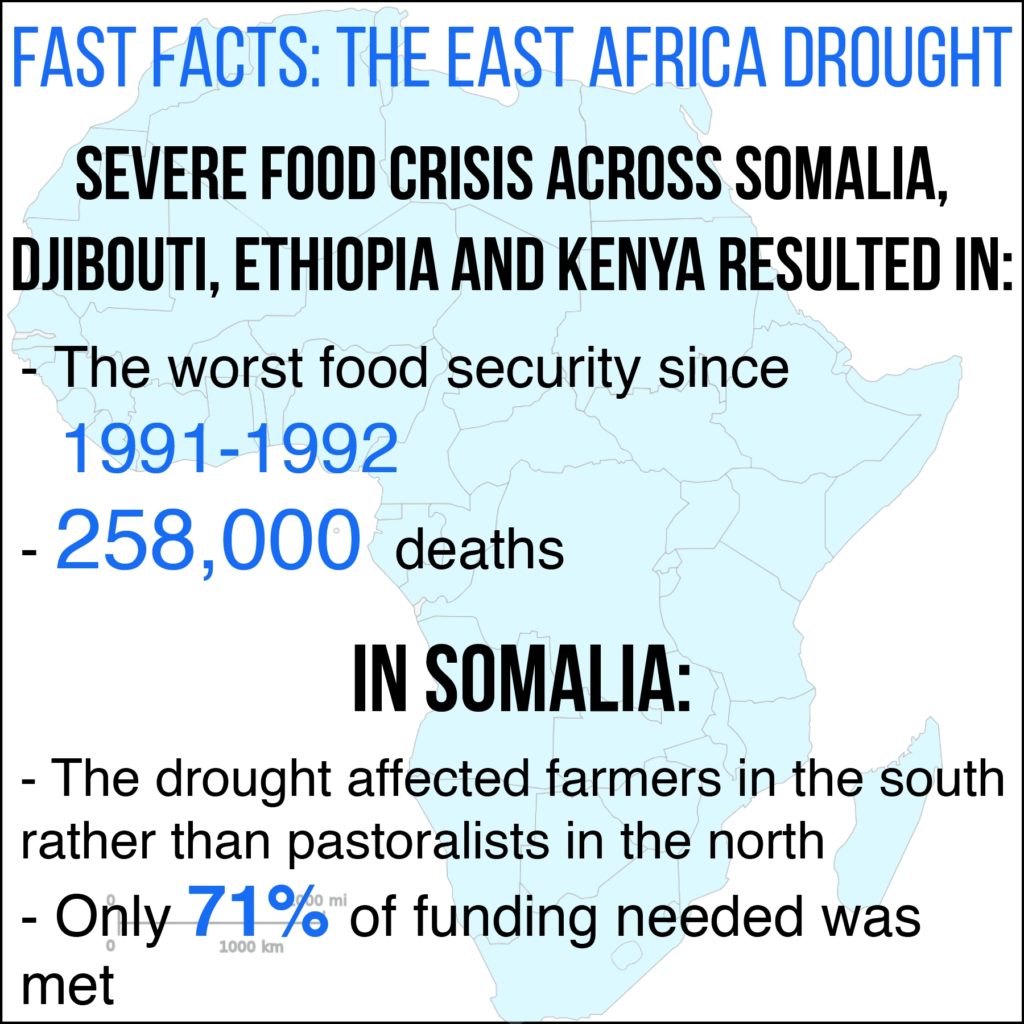 The 2011 drought resulted in 258,000 deaths and widespread food insecurity.

Funk noted that conditions seen in East Africa were similar to conditions in 2010 and 2011. The difference between these two dry events was that the 2010-2011 year had a poor rainy season in the fall followed by a poor rainy season in the spring. However, the severity of the most recent drought, which has been compared to the drought from 1984 has resulted in less deaths.

“In a lot of ways, our global community is working pretty effectively to look out for each other and I think that’s what we’re seeing now,” Funk said. “Our response in 2017 has improved not only because of better climate science but also because we have much better contact and collaboration with our African and European counterparts.”

As of now, the United Nations estimates that it needs $825 million in aid to help 5.5 million people in East Africa. Donors have contributed $500 million so far.

“We hope that the humanitarian response to Somalia’s severe drought will be adequate,” Funk said. “All of our information products suggest the current situation is similar to 2010-11, and we think that there is an above-normal chance that a third drought might come in April and May 2017. Collectively, we have a good opportunity to act now to avoid much human suffering.”