The Daily Nexus
Recipes
A Basket of Eggs to Dye For Natural Home Recipes for Creating Easter Eggs
April 13, 2017 at 12:11 am by Marisa Ratchford

Thanks to my Pinterest-obsessed personality, I decided to get au-natural with my Easter egg dye. To the internet I went, unraveling the fascinating world of homemade dye. I was frankly overwhelmed with how many variations there were to making dye. How did people do this before those cheap Walmart kits were invented?

I decided that, due to my skills as a novice egg-dyer, I wanted to give myself plenty of options so I could figure out which one worked best. My options were abundant regarding the materials I could use to create dye. I chose a few: orange Kool-Aid, avocado skins, red cabbage, spinach, blueberries and red onion skins. 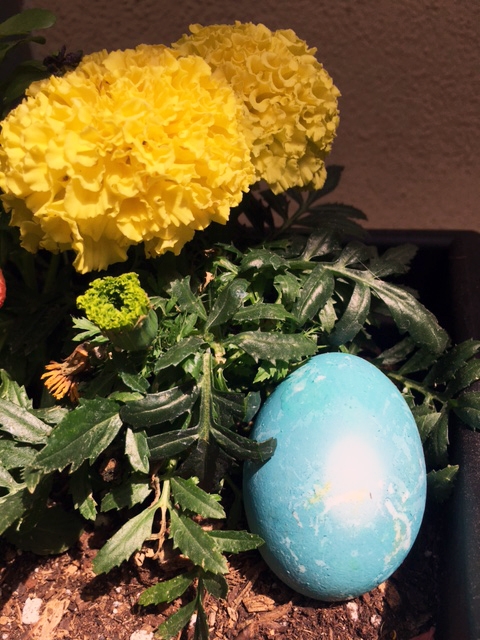 Each recipe required the eggs to be hardboiled beforehand. The ingredients should be placed in a pot with four cups of water and a tablespoon of white wine vinegar brought to a boil. CAUTION: If you choose to do multiple eggs like I did, each ingredient should be boiled in its own separate water. The cooking process is what activates the color, and placing them all in the same pot is like mixing your kindergarten paints together to get that weird brown color.

Once the ingredients have come to a boil, reduce the heat to a simmer for approximately 15 minutes. Then, remove from heat, strain the now dyed liquid into a bowl and toss the boiled veggies or fruit and let cool. Once the mixture is cool, add an additional tablespoon of vinegar and then soak the eggs in the dye until they are at the desired color. For most of these mixtures, I had to leave the eggs in overnight to get the color rich enough.

So how did each option turn out and what colors did they produce? I started with the Kool-Aid because it was the most similar to the artificial dye of my childhood. After soaking for about two hours, the eggs had a cool marbled orange color that developed yellow and pink splotches as time went on. The Kool-Aid created these strange crystalline patterns most likely because the sugar was revolting against being boiled with vinegar; nonetheless, the result was a cool, zesty mixture.

Next, I tried the avocado skins because, apparently, the skins were supposed to dye my eggs a light pink color, which I was highly skeptical of. I attempted to create this mystical color, but all my efforts produced nothing but a cloudy green water and wilted avocado skins. At least I got guacamole.

Due to the horrible outcome of this attempt, I was starting to get disheartened. Next up was the onion skins, and boy did that one turn my mood around! As soon as the onion skins touched the water they began to ooze color. The eggs turned a solid and successful brick red. They looked like the freshest organic brown eggs.
The red cabbage was next, and it was a surprise to say the least. The cabbage turned the water a deep purple color that I eagerly dipped the eggs in, but the color took forever to set. It wasn’t until next morning that the color was a deep, robin’s egg blue that was the ultimate springtime color.

The blueberries were the finale but, unfortunately, were not as spectacular as they could have been. If I had splurged and 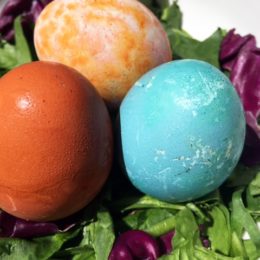 bought more berries, I’m sure the color would have been more vibrant. My cheap ass only used half a bag of frozen berries, because those are not cheap! The color was a very pale lavender that took all night to set and had strange marks of darker and lighter spots that gave it a cool marbled appearance.

Of course, now you’re thinking, “what do I do with all these eggs?” especially if you don’t have a small child to hide them for. But after you’ve Insta-ed the final product, you can use the eggs to make deviled eggs! Simply cut them in half, de-yolk the halves and place them in a bowl. Mix with mustard, mayo, salt, pepper and paprika, then refill the egg white halves and sprinkle extra paprika over the tops.