It was another great weekend for the UCSB women’s tennis team as it was able to come away with victories over Cal State Fullerton 4-1 and UC Irvine 5-0. 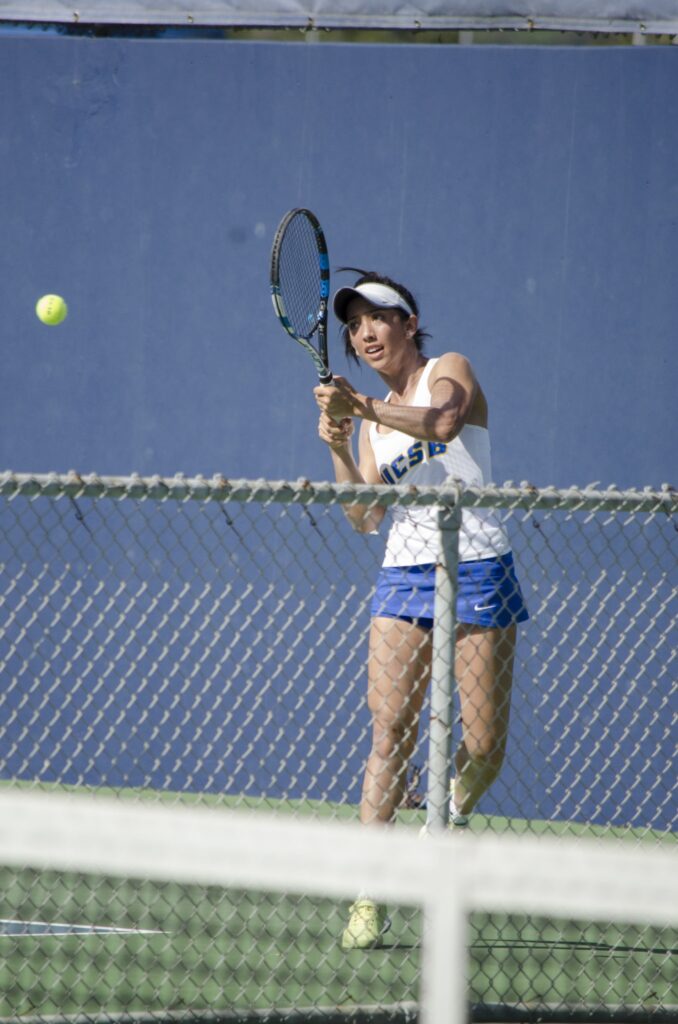 Santa Barbara has now won four-straight matches and is 11-9 overall, 4-1 in Big West play. The Gauchos ended Fullerton’s streak of four games, leading to the Titans current 16-2 and 4-2 record. The Anteaters lost their fifth consecutive game, making them 3-15 and 0-5 in the Big West.

The game against the Titans got off to a bad start for Santa Barbara as they lost the doubles point. The teams split the first two matches as Fullerton pair Sarah Nuno and Karla Portalatin defeated Amanda Atanasson and Stefani Stojic, 6-4. Natalie Da Silveira and Stephanie Yamada then beat Titan pair Masako Makiba and Danielle Pham, 6-2.

However, the Gauchos were able to storm back in singles play. Beginning the rally was senior Jaimee Gilbertson who defeated her opponent Karla Portalatin 6-3, 6-4. Stojic  and Atanasson defeated their opponents Nuno and Makiba at a score of 6-3, 6-3, and 6-3, 6-4. Winning the final completed match for the Gauchos was Melissa Baker who was able to beat Titan junior Danielle Pham 6-1, 5-7, 6-0. The rest of the matches were left unfinished and Santa Barbara began their weekend with a decisive victory over Cal State Fullerton, 4-1.

Sunday brought the Anteaters to UCSB where the meet began with doubles play. The No. 46 team of Melissa Baker and Palina Dubavets got the Gauchos ahead early by winning the first game of the meet 6-1.

The Anteaters responded back with a win of their own as Hali Dickson and Vivien Dvali beat the Gaucho pair of Amanda Atanasson and Stefani Stojic, 5-2. Clinching the doubles point for UCSB was the pair of Natalie Da Silveira and Stephanie Yamada who beat Cassidy Branstine and Ashlynn Hall, 6-1.

Like they did the game before, UCSB stormed to win four consecutive games in singles play. Natalie Da Silveira earned the first singles win of the day 6-3, 6-1 over Vivien Dvali. Jaimee Gilbertson continued her winning ways against Anteater senior Cassidy Branstine 6-1, 6-2. Amanda Atanasson beat Ashlynn Hall 6-2, and capping off the meet was Melissa Baker who beat UCI freshman Jacqueline Tsodikova 6-1, 6-1.

The Gauchos accomplished everything they wanted to this weekend, coming away with two victories over conference opponents and doing it in dominating fashion. The team is now 4-1 in conference play and has improved to third place in the Big West.

The great performance against Cal State Fullerton is a great indicator of where UCSB is playing at currently in the season, a level of play the Gauchos will need to sustain if they want to climb the standings against Long Beach State in two weeks.

The ability of the UCSB women’s tennis squad to continue their great play into the next meet against UC Irvine is exactly what the Gauchos need to be doing in order to stay ahead of the pack by beating the lower teams in the division.

Wherever UCSB finishes after the end of the regular season, their performance and level of play must be high if UCSB wants to create a sequel to the very successful season the program had the year prior, where the team won the Big West Conference Championship and got to the second round of the NCAA tournament.

Join the Gauchos as they begin their final road trip of the regular season in which they will play at UC Riverside on Friday, April 14 and at Long Beach State on Saturday, April 15.