The Santa Barbara County Board of Supervisors unanimously passed an honorary resolution last week declaring the week Tsunami Preparedness Week. The honorary resolution, sponsored by Supervisor Das Williams, was meant to bring attention to what the public can do to prepare in the event of an aquatic disaster. 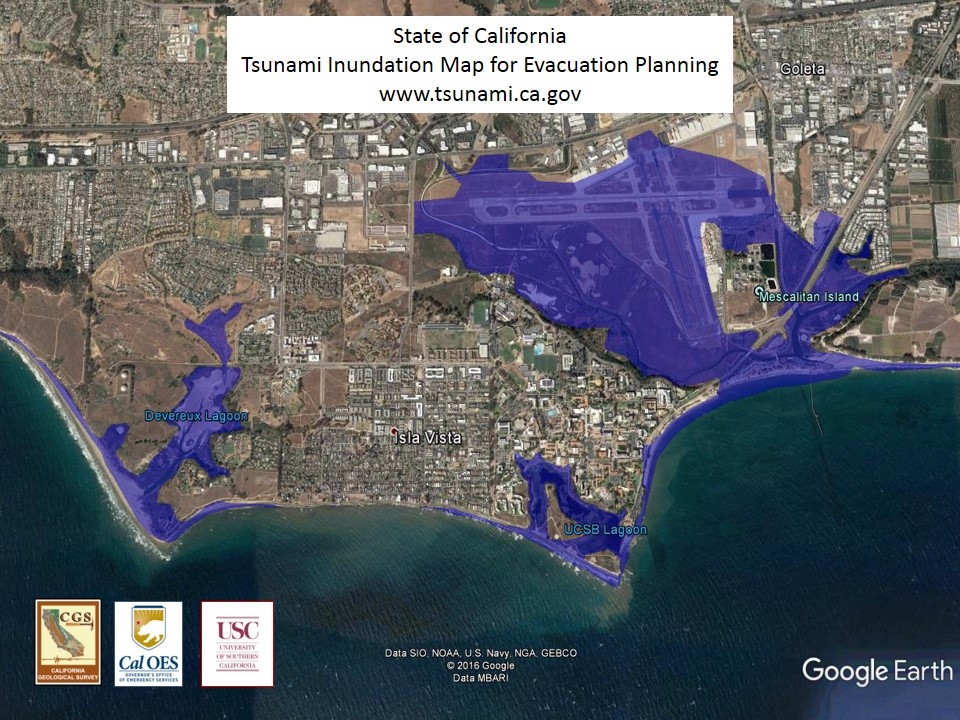 Among the affected sites in the event of a tsunami are UCSB and Devereux lagoons. Courtesy of California Geological Survey

Williams said it is important that people understand tsunamis can happen in this county and endorsed the resolution to improve the natural disaster’s visibility within the community.

“It’s stuff we need to be prepared for and, frankly, I don’t think most people even know that a tsunami could happen here,” Williams said.

As for whether a tsunami is likely to hit Isla Vista anytime soon, Rick Wilson of the California Geological Survey’s Seismic Hazard Mapping Program said it is impossible to predict but entirely possible.

Despite the fact that Japan’s 2011 tsunami is the most recent to affect Santa Barbara, Wilson, a senior engineering geologist, warns that California is vulnerable to tsunamis because of how prone the state is to earthquakes. The previous tsunami caused minor damage to a Santa Barbara Harbor as a result of strong currents.

According to an email from Wilson, California is considered “earthquake country” meaning “we could be susceptible to earthquake hazards (shaking, liquefaction, landslides, etc.) no matter where you live in the state.”

“Since they are related to earthquakes, we really can’t tell when the next one is going to occur … We just have to be prepared the best we can before they do occur,” Wilson said in an email.

Wilson said the tsunami threat for the county is “not large compared to what we saw in Japan in 2011 or Indonesia in 2004” as the county does not have the type of fault capable of creating an extreme tsunami.

Santa Barbara County’s low-lying areas like Carpinteria and Isla Vista would be the most affected in the event of a tsunami. Williams emphasized that citizens should be aware of the possibility of this particular natural disaster.

“There is a threat. Any place where there’s oceans and earthquakes, there’s also tsunamis. Obviously, the world became more aware of it because of the tragedy in Japan a couple years ago,” he said. “Remember that tsunami also hit northern California, causing a lot of damage to low-lying areas.”

Maps from the California Geological Survey show that flooding at UC Santa Barbara would be minimal and would mostly affect the lagoon.

“If you look at the maps for the UCSB and I.V. areas, the flooding is not extensive in these areas because they are elevated on bluffs,” Wilson said in an email.

“Flooding during extreme tsunami events could occur in Devereux Lagoon, UCSB Lagoon and the areas around the airport to the northeast.  These areas won’t flood during every tsunami … just during the extreme ones which we have yet to experience in modern history,” Wilson said in an email.

The resolution Williams sponsored lists three levels of notification for residents to be aware of: tsunami watch, tsunami advisory and tsunami warning.

A watch means the disaster may later impact an area, an advisory means a tsunami’s possibility to create strong currents or dangerous waves is “imminent, expected, or occurring” and a warning means a tsunami with the likelihood of “widespread inundation” is soon to occur or is occurring.

Wilson suggests that if residents feel a large earthquake, they should “drop, cover and hold on” during the tremor and evacuate to high ground or inland once possible. In the event of a tsunami, residents may have as few as five hours to evacuate the area.

“For tsunamis from a distant source, Santa Barbara residents will likely get anywhere from 5 to 13 hours of warning through local officials or on TV/radio before a large tsunami arrives,” Wilson said in an email. “But the message is the same: move to high ground or inland out of the zone.”

The county has partnered with the Aware & Prepare Initiative to set up a website to provide residents with public information in the event of a natural disaster or other emergency called awareandprepare.org.

County residents can use the website to sign up for emergency alert text messages, emails and landline calls which will notify them when there are tsunamis, fires, floods or extreme weather, or residents can text their zip code to 888777 to be signed up for alerts.