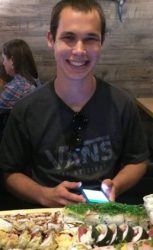 Samuel “Sam” Ira Boldissar, 25, was a third-year doctoral student in the chemistry department and a member of the de Vries Research Group under Professor Mattanjah de Vries.

According to his girlfriend, Jaclyn Rebecca, Boldissar enjoyed being outdoors and had been rock climbing since he was a toddler.

“He loved to go to Joshua Tree to rock climb,” Rebecca said. “His parents would put him in ropes and have him pretend to rock climb. He was always rock climbing, always.”

Jordan Hughes was a housemate of Boldissar and met him in 2014 when they began graduate school at UCSB. He said Boldissar came from a “family of climbers.”

Hughes said Boldissar was “true to his own tastes” and interested in a variety of different things.

“He spent his time on things he found intrinsically interesting,” Hughes said in an email. “He wasn’t in grad school for the degree. He did it because the problems he worked on were important and interesting to him.”

A problem solver, Hughes said Boldissar once created a skunk trap in their backyard in Isla Vista. One night, he went to check on the trap and a skunk wandered into the house through the opened door.

“Lots of yelling ensued and we miraculously avoided getting skunk spray in our house, but we did decide that the best defense was probably just to keep the door shut,” Hughes said in an email.

Haley Snyder was Boldissar’s neighbor in Isla Vista and said “the best” she saw Boldissar was when they would sit in the living room “singing and playing drums.”

“There’s not many people that you’re going to meet that were as genuine or as kind as Sam,” Snyder said.

Sheehan said the group lived together on the 68-block of Sabado.

Sheehan and Mazzella explained how they once wrote a song for Boldissar titled, “Sammy Come Home,” because he was always working on campus at the Chemistry lab.

“We ended up singing [the song] for the rest of the year and it sort of resonates right now,” Mazzella said.

“We’d play it for him all the time and he’d think it was funny,” Sheehan added. “And now Sam has passed away and we want Sammy to come home. We loved him so much and wanted him around so much that we wrote a song about it.”

Rebecca described Boldissar as “selfless” and said he “really just wanted to help anyone in need.”

Rebecca said she and Boldissar went to Big Bear with friends and he helped a group of people get their car out of a ditch on the icy road.

“Sam just walked over without a second thought … to go help these people, and he just got on the bumper and started pushing as hard as he could,” she said. “He’s the reason the car got out of the ditch. He did things like that all the time.”

Rebecca and Boldissar were together for six months and she said they enjoyed taking walks on the beach and introducing each other to the things they each liked to do.

Boldissar took Rebecca to the Santa Barbara Rock Gym and went to musicals like “Beauty and the Beast” because Rebecca loves musicals.

Professor de Vries described Boldissar as “brilliant” and always willing to help other students in the research group with their own projects.

“He was very good but in a humble way,” de Vries said. “He was involved in every project in the lab and helped every other student in the group.”

Boldissar worked on multiple projects in the research group, and his most recent projects are being compiled for publication.

“It’s wonderful his name is going to be in publications and in scientific journals,” Rebecca said. “I’m glad people are going to see the hard work he did.”

Professor de Vries said he wants Boldissar to be remembered “with a smile.”

“He always had this smile and everybody in our group is touched by him,” de Vries said. “He’s been so influential … [and] he had no idea how smart he was. There was never any showing off. It was just that smile.”

Boldissar’s funeral will be held on April 22 at 11 a.m. at Redondo Union High School.