The Daily Nexus
Tennis
UCSB Wins Two Out of Three This Past Weekend
March 13, 2017 at 10:24 pm by Sports Editor

The UCSB women’s tennis team went 2-1 over the weekend as they were able to defeat the University of San Diego Toreros and the No. 39 University of Denver Pioneers by a score of 5-2. UCSB dropped their last game of the weekend to the No.11 Pepperdine University Waves 5-2.

The developing team of senior Stefani Stojic and junior Amanda Atanasson was able to secure their second win as a doubles team this season against the Toreros’ tandem of freshmen Nicole Anderson and Gemma Garcia at a record of 6-2. The efforts of UCSB’s doubles teams earned them the doubles point of the match. 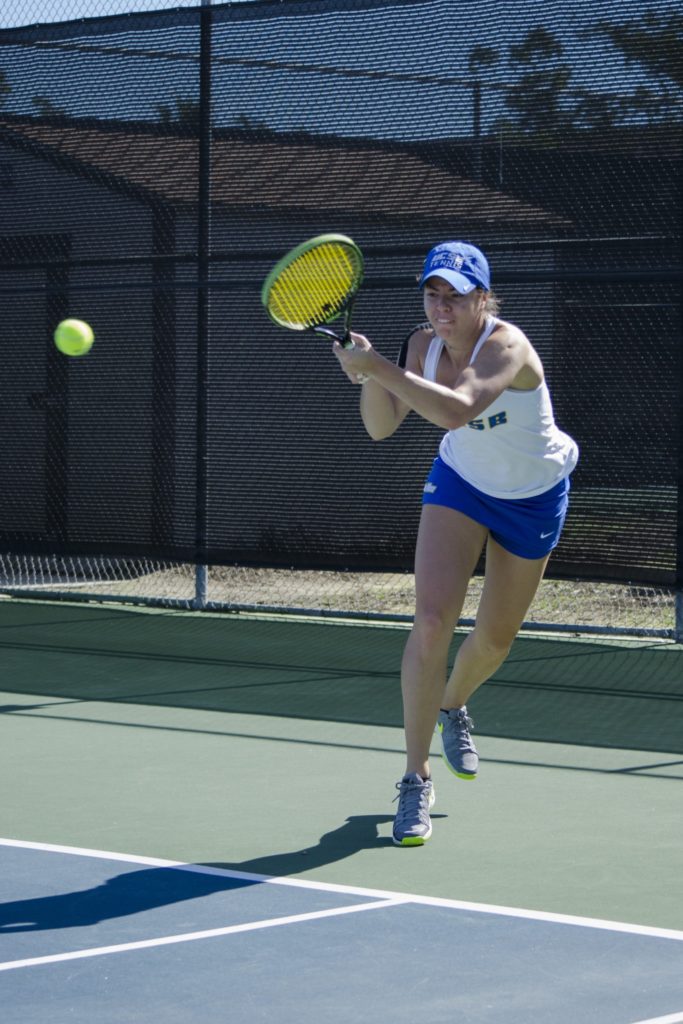 In singles play, the Toreros opened up with a quick victory as redshirt junior Colomba DiFilippo defeated senior Melissa Baker 6-2, 6-2.

Freshman Daniela Morales was able to take the momentum back for the Toreros by defeating Da Silveira, who was previously victorious in doubles play at a score of 6-0, 1-6, 6-1.

Her partner, Gilbertson, was able to earn a victory in singles play as well against Garcia by battling back from a tough first set, defeating her 0-6, 6-3, 6-3.

Atanasson’s ending win left the Gauchos on a three-game winning streak in singles play, an indication of the higher level of play UCSB is at.

The next opponent on the schedule was the No.39 University of Denver Pioneers who was (7-3) heading into the match.

UCSB, who has had trouble against ranked opponents this season, got off to a good start in doubles play, as Da Silveira and Gilbertson defeated their Pioneer opponents 6-1. Then it was Dubavets and Baker who beat junior Julia O’Loughlin and senior Maureen Slattery 6-2, for the clinching win of the doubles point.

Gilbertson also won her match in two sets against Pioneer sophomore Bianca Mok by a score of 7-6, 6-3. In what was the final game of the winning streak, Stojic beat junior Garcia Mboko 4-6, 7-6 (10-8).

The Pioneers went on to win the final two matches in singles play, but it wasn’t enough to stop the Gauchos as they won the meet 5-2.

The last game of the weekend was played on Sunday against the No.11 Pepperdine Waves. UCSB was in for a tough match and it began with the Gauchos falling behind in doubles play.

The duo of Gilbertson and Da Silveira lost their match 6-1. UCSB came back as Atanasson and Stojic defeated junior Laura Gulbe and senior Apichaya Runglerdkriangkrai 6-3.

However, the Gaucho pair of Baker and Dubavets lost their match to senior Christine Maddox and junior Mayar Sherif Ahmed by a score of 6-4, giving the doubles point to the Waves.

Pepperdine continued to be dominant as they went on a four-game winning streak in singles play. Maddox, freshman Ashley Lahey, Gulbe and sophomore Luisa Stefani all defeated their Gaucho opponents in consecutive matches and all of them won their matches in two straight sets.

UCSB will play their next match at home against the Harvard Crimson, Saturday, March 18, at 11 a.m. PST.