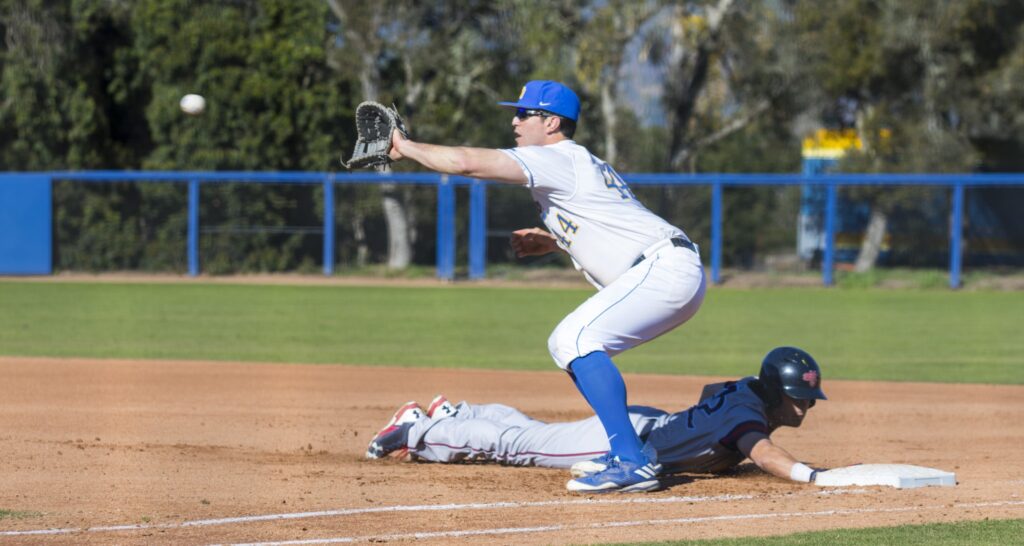 Austin Bush reaches for the ball as a runner slides back into first base. Nicolas Eitelbach / Daily Nexus

The Gauchos ended their last home game series against Tulane on a high note with a victorious sweep and a winning home record of 4-3. Since then, however, UCSB lost four straight until finally pulling out a 10-8 win over BYU in the first game of the series.

It then proceeded to drop both games of the doubleheader on Friday as well as the final game of the series on Saturday at Larry H. Miller Field in Utah, yielding an overall 5-10 season record.

Heading into this weekend, UCSB had a dominating 7-1 lead over BYU in their match-up series. Both teams were visibly having slow starts to their 2017 seasons, UCSB starting the weekend with a record of 4-7 and BYU 4-6. The Cougars had been on the road for a tough 10 consecutive games and were eagerly eyeing a win in their home opener against the Gauchos.

UCSB got on the board first on Thursday with two runs in the top of the second and another in the third, but BYU answered in their second inning at-bats with one run, continuously producing a run per inning until they led 4-3 by the bottom of the fifth.

In the top half of the sixth, the Gauchos racked up three more runs to make it 6-4 and take the lead back from the Cougars. After sophomore designated hitter Sam Cohen touched home on junior third baseman Kenny Corey’s single to tie the game 4-4, BYU junior starting pitcher Maverik Buffo (1-3, 5.06 ERA) was relieved by junior lefty Rhett Parkinson (0-0, 4.50 ERA).

However, this pitching change did not do much to adversely affect the Gauchos as they continued to get on base, scoring freshman center fielder Tommy Jew on a throwing error by BYU senior catcher Bronson Larsen and knocking in Corey on a sac-fly to the right from UCSB junior shortstop Clay Fisher.

The Cougars bats did not stay quiet with a late surge in the seventh to make it a close one-run game once again. However, they were not able to retrieve the lead from the Gauchos, who remained hot at the plate, for the remainder of the game.

The first game of Friday’s doubleheader started out optimistically for the Gauchos, who broke it wide open by putting up five runs in the top of the first. Their defense then retired the side in order in the bottom half for a successful first inning.

UCSB junior starting pitcher Kyle Nelson (1-2, 5.30 ERA) gave up a two-run jack to BYU’s Larsen in the bottom of the second, and the scoreboard read 5-2 through a scoreless third and fourth innings.

Nelson was pulled with one out in the bottom of the fifth after giving up another home run, a line drive doubles, and three singles that culminated into three runs for the Cougars to make it 5-5. Freshman RHP Shea Barry (0-1, 3.52 ERA) gave up one more single, allowing BYU to score another run and make it 6-5 Cougars before he retired the final two batters.

UCSB urgently got a run back to tie it 6-6 in the top of the sixth. Redshirt junior catcher Dempsey Grover struck out swinging but reached first on an error from BYU freshman catcher David Clawson and scored on a triple from Fisher.

Barry had a controlled one-two-three inning in the bottom half of the sixth to hold the score, but the Cougars defense had a three-up, three-down inning as well in the top of the seventh to keep the Gauchos in check. Then, in walk-off fashion, Cougars sophomore shortstop Daniel Schneemann homered to right field, tragically defeating UCSB 7-6 for BYU’s first win of the day.

Matters worsened from there as UCSB carried Friday afternoon’s loss into the second game, losing in a 17-3 blowout that night.

The Gauchos had three fielding errors, junior RHP Chris Clements (0-3, 9.42 ERA) allowed 13 runs in three innings, and freshman LHP Ben Brecht (0-0, 4.35 ERA) allowed six more in the fourth alone after relieving Clements before he finally halted BYU’s offense from getting on the board for the remainder of the game.

The only three runs scored by UCSB were a home run from Fisher in the first and two unearned runs in the eighth on an error from BYU sophomore right fielder Brock Hale.

The noon finale on Saturday was another high scoring game at 14-8 to the Gauchos demise, but not as merciless as Friday’s 17-3 nightcap.

Saturday mirrored the first game of Friday’s doubleheader in that UCSB came out strong in the first inning, earning four, but their defense continued to give up more runs than their bats could generate and they suffered from three more fielding errors. Gauchos junior starting pitcher Steven Ledesma (0-2, 9.20 ERA) took the loss, giving up 10 runs over four and one-third innings.

In a more positive light, UCSB continues to lead the BYU series now at 8-4, and despite Friday night’s defeat, the Gauchos offense seems to be alive and active. Certainly, their defense and pitching staff, in particular, have much to improve upon if they intend to win games and get back over .500.

However, it is still early in the season with a plenty of baseballs left to play, meaning there is sufficient time to recover and develop as a team.

UCSB will be back at Caesar Uyesaka Stadium for 11 successive games starting with this weekend’s series against Stony Brook University. The Gauchos return to their home turf should give them the confident advantage they need to make progress toward a winning season.